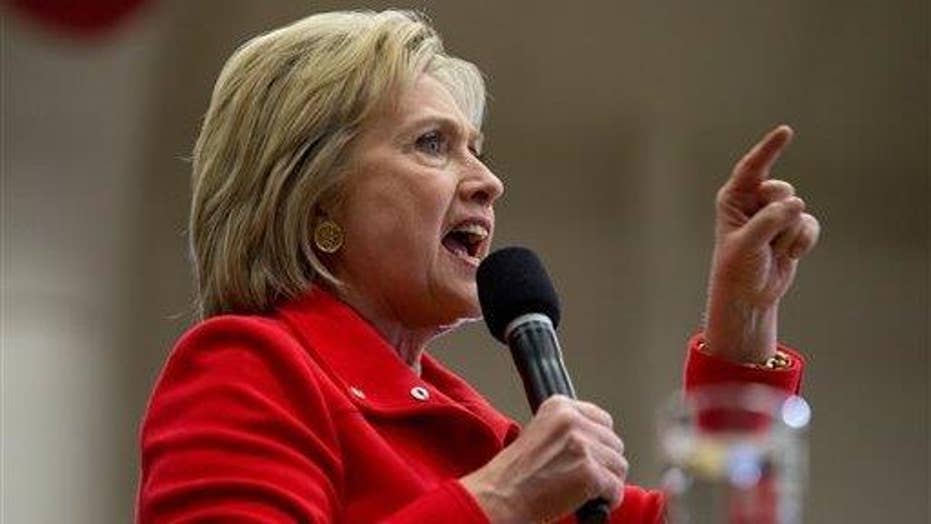 As she struggles to salvage Iowa

Mainstream news shows have now joined conservative websites and magazines in roiling political waters with the suggestion that Hillary Clinton could be indicted. Such charges, the theory goes, would pertain to her sending secret government information over her personal email account while she was secretary of State.

Under questioning by ABC’s top political anchor in the days before the Iowa caucuses, Clinton dismissed the whole controversy as Republicans “grasping at straws.”

“This is very much like Benghazi, George,” Clinton told George Stephanopoulos. “The Republicans will continue to use it, beat up on me. I understand that. That’s the way they are.”

But the most respected news organizations in the nation — The New York Times, The Washington Post and The Wall Street Journal, as well as ABC and other television networks — all pursue the Clinton email story as legitimate news rather than as a political vendetta.

John Podesta, Clinton’s campaign chairman, told me before Clinton’s narrow win in Iowa that the story is doing little political damage to Clinton in the Democratic primaries. Democrats, including Clinton’s fiery opponent, Sen. Bernie Sanders, the democratic socialist from Vermont, are dismissive of it.

But Podesta conceded the controversy is eating up time, forcing Clinton to go down the rabbit hole to discuss endless hints and allegations.

More broadly, many people beyond the campaign believe the furor contributes to the perception that Clinton is not honest.

So, too, does the far more concrete story about ties between Clinton’s work at the State Department and donors to her husband’s charity. But reporting on that issue pales in comparison with coverage of the emails.

The email story broke last March when the New York Times reported Clinton “used a personal email account to conduct government business as Secretary of State.” In July, the story escalated when the Times incorrectly reported that requests had been made for a criminal investigation of Clinton’s handling of email.

Even after a correction on that story, her totally legal use of a private server while at the State Department became an acceptable short-hand for political opponents — and reporters looking to appear tough — to condemn Clinton. Still, there was no evidence of law-breaking.

The attacks continue like a steady rain even though the Times reported in August that Clinton is “not a target of the investigation.” In September, the Justice Department put out a brief saying even when Clinton deleted personal emails without “agency supervision,” it was appropriate and legal.

A week ago Josh Earnest, the White House press secretary, reiterated that “officials have said… she is not the target of the investigation.”

Later last week, NBC News reported that emails that had been retroactively declared classified had also been sent to the personal email account of former secretary of State Colin Powell and to key aides of his successor, Condoleezza Rice.

None of it quieted critics. They responded by suggesting a White House cover-up even as an October poll by Monmouth found 59 percent of Americans were “tired of hearing about Clinton’s emails.”

“I find it hard to believe that they would be eager to nominate someone who is under indictment and could well face felony incarceration,” Sen. Ted Cruz (R-Texas), the winner of the Republican Iowa caucuses, recently told radio host Hugh Hewitt.

What felony charge is that?

Republicans often point to charges against former Gen. David Petraeus for sharing classified information with a former girlfriend. But even in a case where the general handed military information to an outsider, he pled guilty to a misdemeanor. He never went to jail.

It has never been shown that Clinton shared information marked as classified at the time it was sent or received.

And of course there is still no evidence that she broke any law.

Legal analyst Dan Abrams recently reviewed the allegations and wrote on the LawNewz.com website that while Clinton was “foolish” to use a private server, “it is also indisputable that it was neither a crime nor even a violation of State Department procedure for Clinton to have used personal email for government business at that time.”

But nonpartisan assessments of the case have not stopped the drumbeat at every GOP primary event. A willingness to join in assumptions of Clinton’s guilt is a litmus test for anyone entering the conservative echo chamber on talk radio and the internet.

“I have friends that are in the FBI and they tell me they’re ready to indict,” former House Majority Leader Tom DeLay (R-Texas) recently told NewsmaxTV. DeLay added that if the FBI and Attorney General Loretta Lynch do not indict Clinton, there are FBI agents who plan on “going public…Either she’s going to be indicted and that process begins or we try her in the public eye with her campaign.”

That kind of innuendo-laden conjecture is widespread among Republicans and in some cases extends to suggestions of criminality by the White House.

“I think the FBI director would like to indict both Huma [Abedin, a top Clinton aide] and Hillary as we speak,” Rep. Darrell Issa, (R-Calif.) told the Washington Examiner last week. He explained that the FBI director, James Comey, is being forced by the Obama Administration to “triple time make a case of what would otherwise be…a slam dunk.”

The use of rumors to weaken a political candidate has a long history. In 1999, GOP presidential candidate Pat Buchanan won repeated applause at rallies nationwide when he promised that his first act as president would be to turn to his predecessor, Bill Clinton, and say: “Sir, you have the right to remain silent.”

Base political attacks have been with us since the Founding Fathers. But in the era of social media and niche conservative outlets, the body politic seems to be entering a new era in which the tail wags the dog. The biggest newspapers and networks say they are just reporting the news while spreading baseless venom.