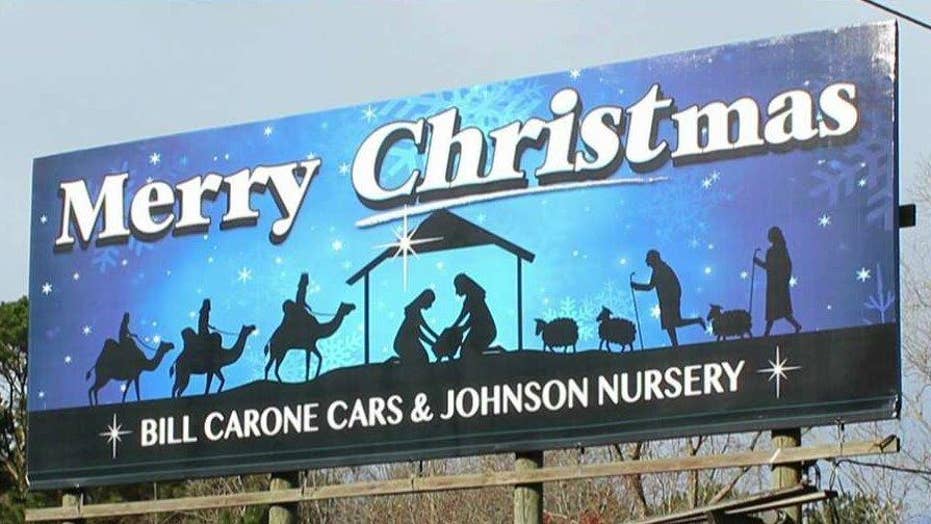 Battle of the billboards: Christians vs. atheists

Earlier this month, American Atheists launched two nationwide billboard campaigns urging Americans to celebrate the holidays by skipping church. The first billboard depicts a text message exchange in which one young woman tells a friend that she plans to skip church during Christmas and that her parents will “get over it.” The second billboard parodies President-elect Trump’s campaign slogan, urging Americans to “Make Christmas Great Again!” by skipping church.

In an interview explaining the billboard campaign, American Atheist President David Silverman said, “It is important for people to know religion has nothing to do with being a good person, and that being open and honest about what you believe—and don’t believe—is the best gift you can give this holiday season.”

While we are a little confused by Silverman’s apparent delight in fantasizing about family division during the holidays, we agree with Silverman that openness and honesty are good things and, in that spirit, we offer a few reflections:

1. Let’s be clear on what religion is and what it is not.

Religion is a set of ultimate commitments about the meaning (or lack thereof) of the world. As Christians, we make a religious claim when we say the world was designed by a loving and righteous God who gives the world a moral order and reveals to humanity the difference between right and wrong. But atheists are also making a religious claim when they say the world is a meaningless explosion of molecules that leaves Earth’s organisms free to define “good” and “evil” in the way they think works best. So the choice is not between religious Christianity and irreligious atheism; it is between religious Christianity and religious atheism.

2. Let’s be clear on what fundamentalism is and what it is not.

3. Let’s be clear on the relationship between religion and goodness.

Silverman says that it is important for people to know that “religion has nothing to do with being a good person.” We have no argument that many atheists are very moral people—often outperforming their religious counterparts. That’s because each of us, we believe, retains enough of the image of God in us to love the good and hate the evil. God has hardwired this knowledge of good and evil into the universe and into our consciences.

Where we do have an argument with atheists like Silverman is that we believe atheists have no consistent intellectual basis for declaring something “good.” If—as atheists claim—there is no divine Lawgiver, how can there be moral law? There can’t be. If the material world is all that exists, then it is better to speak of things being “useful” or “useless” rather than “good” or “bad.” After all, morality implies a higher standard to which we must conform. The dilemma for the atheist, of course, lies in who gets to determine what is “useful.”

Take, for example, the desire to do good that atheists and Christians feel throughout the year and during the holiday season. As Christians, we believe we should love our neighbors because our God demonstrated his love for the world by dying on a cross for our sins. We believe we should be generous with our resources because we serve a God of boundless generosity, who offers forgiveness to all who will receive it as a gift by faith.

A consistent atheist, on the other hand, will believe that the love he feels for others at Christmas, the yearning for goodness, and the longing for meaning experienced especially during this season can be viewed as useful illusions created by genetic dispositions in our brains programmed by evolution to propagate our DNA into the future faster than our neighbors can.

Americans should decide: which view is more intellectually satisfying? Which view should we celebrate while we exchange gifts around the Christmas tree?

4. Let’s be clear that Christians should not think they are morally superior to others.

As Christians, we believe that all humans, ourselves included, are infected with a sort of badness that courses through our veins, and that Jesus is the great physician who alone can heal us. We don't come to you as a good person approaching a bad person, but as a grateful patient who has found healing in the hands of the good doctor. That’s what we celebrate at Christmas, and we invite you to join us.

5. For those who are curious, we invite you to join us in exploring our hope this Christmas.

Don't join us expecting that you should find unblemished people; come as a seeker in a multitude gathering around a Man claiming to be the Savior of the world. Tests his claims. And see if you discover what so many throughout history and across the world have discovered: that he really is worthy of our ultimate trust and love.

J.D. Greear is the pastor of The Summit Church, in Raleigh-Durham, NC. He is the author of Gospel: Recovering the Power that Made Christianity Revolutionary. Follow him on Twitter @jdgreear and on the web at jdgreear.com.