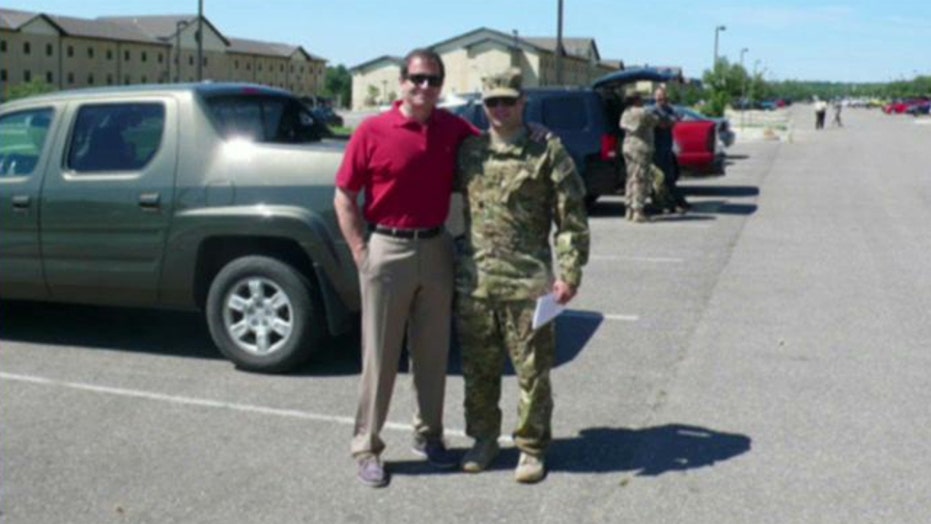 66,000 US troops are currently in Afghanistan

Author's note: This account is not to suggest that my son is any more interesting or important than any of the other soldiers, sailors, airmen and Marines who've answered the call to serve their country in the Afghan war.  It is simply a father's first-person account, nothing more.

It's a beautiful blue-sky day in Eastern Kansas. Storms rolled through the previous night to wring the humidity out of the air.

We're drinking coffee and idly perusing the menu while we wait for his buddies to join us. I'm not even aware of the Bob Marley song playing on the overhead speakers until he says matter-of-factly, "I love reggae!  Makes me feel like I'm going to the beach today and not to war."

I take a big swig of coffee.  Maybe it'll wash down that lump I suddenly found in my throat.

His two buddies arrive; there's laughter, joking.  They've both seen this day before; both have deployed, either to Iraq or Afghanistan. One is going back on the same flight as my son. But for 1st Lt. Joshua Scott, and for me, this is all brand-new: his first combat deployment.

I think about that time eight, maybe nine years ago when the memories of 9/11 still burned hot and the war in Iraq was young.

Josh announced that the only school he wanted to attend was West Point.

His mother wasn't keen on the idea of her son becoming a warrior. I remember telling her, "Don't worry.  Iraq will be over by the time he graduates."

I was right.  But I never expected the war that began the month after 9/11 would still be roiling a dozen years later, that what seemed at first like the relatively low-intensity Afghan conflict would still pull U.S. forces into what has become America's longest war.  Now my son, my soldier, is going over to help fight it.

We drive toward the baggage drop. Six years ago, it was a bright July day much like this one  when we dropped him off at West Point to begin training to become an Army officer.

Somehow that day was tougher for me; now I'm fishing around inside my head and my heart for the reason why.

Back then we were only delivering an 18-year-old to begin basic training at the nation's oldest military academy; we knew we'd see him again in a matter of weeks. This deployment is scheduled to last nine months. Why was West Point's R-Day so much tougher for me to take?

Maybe it's because I've seen what a West Point education has done for him in those six years, what kind of man he's become.

Back then, the father-son wrestling matches that occasionally broke out in our kitchen could usually end in a draw.

These days, after his four years on the Army's Sprint Football team and participation in West Point's P-T (physical training) regimen, he could easily whip his old man in any contest.

It's more than his bulked-up physique, however. I see how he's matured, how he handles the myriad of responsibilities of an officer, how calm and unfazed he seems in stressful situations. The critical thinking and leadership skills developed at West Point are on daily display. This isn't the kid we dropped off six years ago.

We arrive at a parking lot where some unseen giant has plopped four truck-sized steel boxes, shipping containers, one for each company deploying today. The clothing and personal gear that will sustain these soldiers for the next nine months, so laboriously packed into duffels, now gets stacked into these colossal steel caves. Soon the giant will return to stuff them into the belly of an Air Force cargo plane bound, like the soldiers, for Afghanistan.

Now we're driving again, heading toward the site of the sendoff ceremony.  I ask point-blank how he's feeling.  "I'm excited," he answers. "A little nervous, but mostly excited."

We enter the cavernous helicopter hangar where the deployment ceremony will take place. Tables are piled high with food but nobody seems to be eating much.

My assessment is that two moods prevail here; the soldiers seem relaxed, maybe stoked--there are hearty hugs and high fives.

Nothing that I see among them resembles anything close to dread. But for the families, the mood seems somber, even sorrowful.  I see a few tears, long lingering kisses and hugs that have no end.

The soldiers with families squeeze in their final few pre-deployment minutes with spouses and children.  These are the scenes that truly make my heart ache.

The kids, most of them too young to truly comprehend what's going on, spending precious seconds in the arms of Dad or Mom. It will be nine months, God willing, before they see each other again. For many of these kids that's a lifetime or more.

The Army's myriad rules and regulations bring some unintended levity to the day. At one point Josh reaches in his pocket and realizes he's still carrying his multitool, complete with 3-inch blade.

He wonders whether he should take it on the plane.  "I think we're not supposed to.  Then again, we're going to be issued our weapons and we're bringing them onboard…so what difference does it make?" He grins.

Sure enough, we make our way to a back room of the hangar where dutiful soldiers with clipboards and checklists stand ready to dole out a soldier's most basic tool: his weapon.

My son's face lights up when he sees his name taped on an M-4 automatic; until this moment, he wasn't sure that's what he'd be getting.

"They're so much lighter than the M-16," he says with relief.  It's also far bigger and way more lethal than his multitool.  I hope he never has to use it.  If he has to use it, I hope it works.

Now we're back in the main hangar. Some soldier hooked up her laptop to provide the music, an eclectic mix of country, acid rock and pop. At the moment, Miley Cyrus is gleefully squealing:
"…So I put my hands up, they're playin' my song, the butterflies fly away…"

No, Miley, the butterflies in my stomach haven't gone anywhere.  I think  this entire cavernous hangar is filled with them.

A gentleman comes up, introduces himself, shakes my hand. His daughter is an Apache helicopter pilot who graduated West Point the year before my son. She's going over and yes, this is her first deployment too.

He thanks me for mentioning my son's story as I do from time to time on Fox News' "Happening Now."  "People need to remember," he says, "we still have a war going on over there and this country's kids are fighting it!"

Then the music breaks for an announcement: Ten minutes until the ceremony. Ten minutes to say your goodbyes.

I've anticipated this moment for days, weeks now. I've had all kinds of time to ponder the words I want to speak.  I want it to be something brilliant, meaningful, inspirational--Neil Armstrong meets George Patton. But words fail me.

I tell him all the things he already knows, that I love him, I'm proud of him, we'll all be praying for him, stay safe. The last two seem so pointless.

He's going to a war zone. Do I honestly think he's not going to be doing everything he can every second of the day to do that? It's not like he'll hang one of those OSHA signs on the tent door, "Warning: Taliban outside! Remain alert!"  I almost wish I hadn't been so trite.

The ceremony itself is mercifully brief. The soldiers gather in tight formation under a gigantic Stars and Stripes.  The chaplain offers a prayer; a commander says a few more words.

Then the order bellows throughout the hangar:  "RIGHT FACE!  FORWARD MARCH!"

Four hundred men and women step smartly toward the aircraft doors and off to a war they tell us is ending.  Dear God, bring each of them home!

Applause erupts from those left behind as they step into the July day.  The sun beams down on the soldiers while a father is beaming at his son.

Jon Scott currently serves as the anchor of FOX Report Weekend (Saturdays at 7PM/ET and Sundays at 6PM/ET). In this role, Scott highlights the latest developments and breaking news in the U.S. and around the globe.Click here for more information on Jon Scott.
ADVERTISEMENT