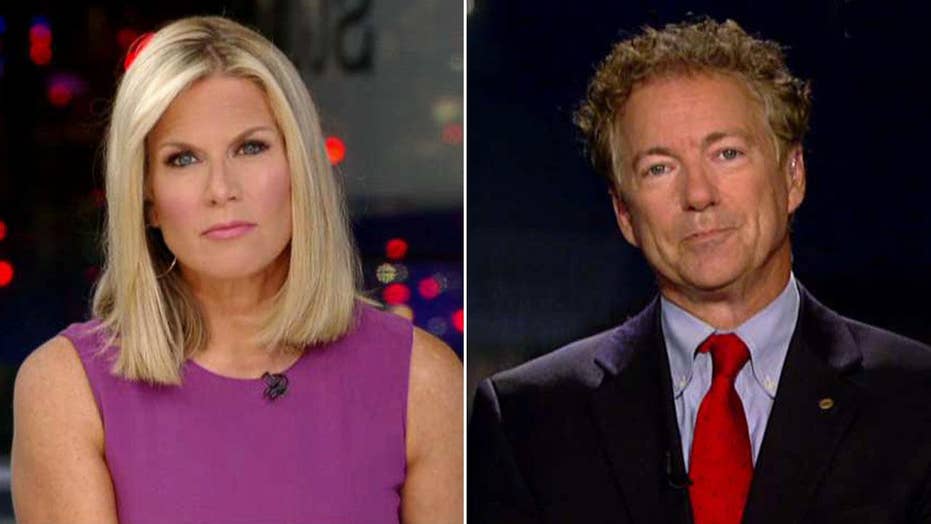 Sen. Paul: Can't be in favor of keeping ObamaCare spending

On 'The Story,' lawmaker explains his opposition to the GOP's last ditch repeal bill

No one wants to repeal ObamaCare more than I do.  As a career physician, there are few in Congress who have as much firsthand experience on all sides of the health care debate as I do.  I’ve voted for repeal.  I’ve sponsored my own Repeal and Replace plans.

But I’ve also led the fight to stop and block “ObamaCare Lite” plans offered in both houses of Congress this year.  These have been plans that have spent nearly as much money as ObamaCare, that left most of the taxes and regulations in place, and basically failed to honor our promise of repeal.

Unfortunately, they’re back again, and I must add to the list of ObamaCare Lite plans to oppose the new Graham/Cassidy bill that was introduced last week in the Senate.

In all ways, this bill is also ObamaCare Lite.  In no way is it repeal the way we promised.  I will oppose this bill as I did the other fake repeal bills, and I urge those who want repeal to do so, as well.

Make no mistake – Graham/Cassidy keeps ObamaCare funding and regulations in place.  Oh, it rearranges the furniture a bit, changes some names, and otherwise masks what is really going on – a redistribution of ObamaCare taxes and a new Republican entitlement program, funded nearly as extravagantly as ObamaCare.

Graham/Cassidy doesn’t repeal a single ObamaCare insurance regulation.  All of the Title 1 rules, the Essential Health Benefit rules, all of them - they’re still in place here.

States may grovel on bended knee for some relief to the federal government, with no guarantee of success and no permanent solution beyond the current administration.

I believe the president and HHS Secretary would WANT to do the right thing on state waivers, but I’ve already spent the better part of the year arguing with an army of bureaucrats and lawyers in the administration trying to get them to do something President Trump and I AGREE should be done - loosening up the rules on joining group plans.  This would be a huge change for Americans and a big fix for our system – yet they can’t get it done.  The idea disappears into the Swamp.  I’m afraid even the minor waivers of regulations envisioned here would do the same.

This bill is also set to spend us further into debt.  Even the bill’s authors and proponents, using what I’m sure are rosy numbers, admit that their ObamaCare Lite bill will spend 90 percent of what we currently spend on ObamaCare.  Other estimates are closer to 95 percent.  Either way, did anyone go out to vote so we could repeal only 5 or 10 percent of ObamaCare?  I didn’t.

Graham/Cassidy won’t fix our health care problems, and it will become a permanent drain on the treasury - one that is already $20 trillion in debt, with a $700 billion deficit next year.

Repeal of ObamaCare, if we did it “root and branch” as some suggested in their campaigns, would have saved over a trillion dollars in spending over 10 years.  Instead, we are left trying to save crumbs while leaving the system largely intact.

I won’t do it.  I know many of my colleagues are getting desperate to say they “did something,” and I can sympathize with that.  They figure most people aren’t paying attention, and the press conference where they said they did something would carry them through the elections next year.

I’m looking ahead past the next election, to the day of reckoning when the bills are due, and we are out of money, because we did the wrong thing for the wrong reasons.

Graham/Cassidy keeps a trillion dollars in taxes and spending and redistributes it.  And, somehow, people are looking to call this “federalism.”  I wish it were, but that’s just not the case.

To my colleagues, I say, “No thanks.”  This bill is no better than the last attempt and should receive no more support.  It should not pass.  I’ll vote no, and I’ll fight to stop the newest ObamaCare Lite plan.