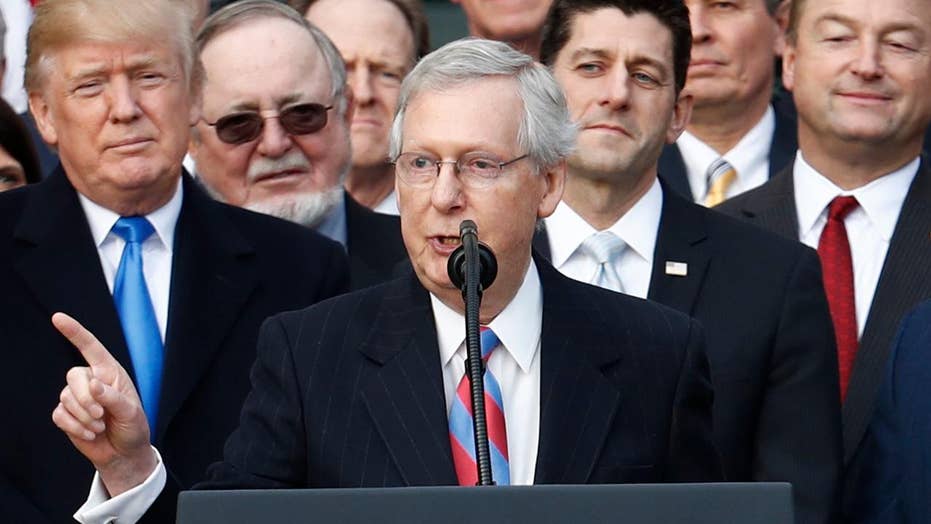 Senate Minority Leader says it's been a year of extraordinary accomplishments for the administration.

They were frustrated with stagnant wages. They were fed up with shrinking opportunity. They were tired of watching America lose ground to our competitors overseas.

With this week’s historic vote, Republicans in Congress are sending our reply back to the American people: We heard you loud and clear.

The Tax Cuts and Jobs Act, which passed the Senate on Tuesday and which President Trump will soon sign, is the most sweeping overhaul of our nation’s tax code in more than 30 years. It includes a host of hard-fought conservative victories that will help families next year while making America stronger for decades to come.

American families have waited long enough. They cannot afford to be burdened any longer by an outdated, unfair, inefficient tax code that takes too much money out of their paychecks.

Our primary goal was to cut taxes for American families. Ten years ago, middle-class Americans in Kentucky and across the country were hit hard by the Great Recession. Job opportunities dried up. Take-home pay stopped growing. It became difficult for families just to get by, much less to get ahead and save for their children’s futures.

For eight disappointing years, Washington only made matters worse. The Obama administration’s response to the crisis was to raise taxes on families, pile more regulations on businesses, and micromanage more of Americans’ lives. The wealthy and well-connected did just fine as a result—but ordinary American households saw little progress.

Helping them was our first priority. That’s why the Tax Cuts and Jobs Act cuts tax rates across the board, doubles the standard deduction, and significantly expands the Child Tax Credit. Thanks to these and other changes, a typical family of four earning the median family income gets to keep more than $2,000 that they would have otherwise had to send off to the IRS.

That is more than $2,000 of their own money. They earned it. And they deserve to keep it more than Washington does.

The bill goes even further to help families by repealing the unfair individual mandate tax at the very heart of ObamaCare. Under ObamaCare, if Americans didn’t buy the kind of health insurance that Washington thought they should buy, they were punished with a tax penalty. But if the plans available under ObamaCare are not affordable or not desirable, the blame lies with the failing law itself. The last people who should be fined or penalized are the working Americans whom ObamaCare is letting down.

That’s why the Tax Cuts and Jobs Act eliminates this key provision of ObamaCare. It’s past time that Washington let Americans purchase the health insurance that works for them.

In addition to cutting workers’ taxes directly, the law puts America on a trajectory towards higher wages and better job opportunities by making our country a better place to do business. It cuts taxes on job creators and Main Street businesses, eliminates incentives for shifting manufacturing abroad, and makes America a more attractive destination for jobs, profits, and investment from around the world.

Reports are already coming in that these changes are making Chinese officials nervous. I’d call that a good sign for American manufacturers.

And that’s not the only part of this historic law that will give pause to our international competitors.

For almost 40 years, Congress has tried time and time again to open a small portion of the Arctic National Wildlife Refuge in Alaska for responsible oil and gas development. The Tax Cuts and Jobs Act finally does it. This will create good-paying energy jobs, strengthen America’s global position by increasing our energy independence, and contribute to lowering energy costs for working people across the country who already pay too much to fill up their cars and heat their homes.

American families have waited long enough. They cannot afford to be burdened any longer by an outdated, unfair, inefficient tax code that takes too much money out of their paychecks. That’s why it was so important that President Trump and Congress seize this once-in-a-generation opportunity.

When the president signs this landmark bill into law, Republicans will have successfully cut taxes for American families, put American businesses on better footing to compete with foreign rivals, repealed a core piece of ObamaCare, and won a decades-long battle to increase our domestic energy production.

It’s unfortunate that Republicans had to do this on our own. In the past, including as recently as the Obama administration, prominent Democrats claimed to support many of the pro-growth, pro-worker ideas at the heart of our reforms.

In the 1960s and the 1980s, Democrats voted in significant numbers to cut the American people’s taxes. But times have changed, and now that President Trump is in the White House, my colleagues across the aisle put political obstruction ahead of working families’ interests and tried to block tax reform at every turn.

Fortunately, my colleagues in the House and the Senate did not let this unprecedented obstruction stand between middle-class families and the tax relief they sorely deserve. The American people have waited long enough for this victory.