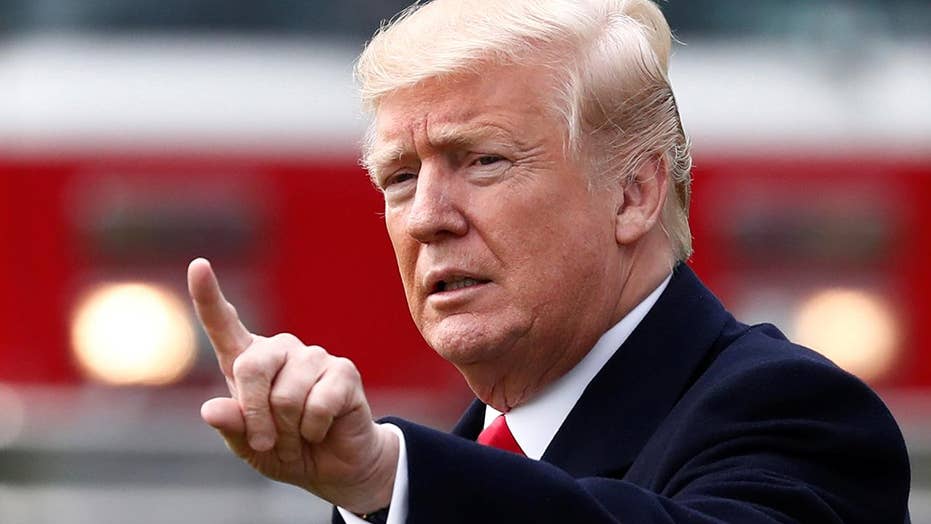 The regime of Syrian dictator Bashar Assad used chemical weapons against his own nation’s population over the weekend, killing at least 48 people – the overwhelming majority of them civilians.

President Trump wisely established a red line a year ago and, unlike his predecessor, followed through by launching 59 tomahawk cruise missiles at Assad’s regime last year after Assad’s use of Sarin nerve agents.

Assad has made frequent use of chlorine in the intervening period. It is unclear exactly what substance he used this time to kill innocents. Nonetheless, it is clear that the scale of this atrocity warrants a response from the United States.

The images of children suffocating that have been seen in the media present a compelling moral case for action. The U.S. should raise the price for war crimes.

Syria is not just a moral issue, however. There are important strategic interests at stake. The international norm against poison gas goes back a century and must be upheld.

Syria is also the central theatre in the competition for regional power between U.S. allies in the Middle East and the radical regime in Iran. The vacuum in Syria has also provided a dangerous and destabilizing foothold for Russia in the Middle East.

The Kremlin and its surrogates have already begun spreading threats about Moscow’s response if the U.S. takes punitive military action against Assad. We have been here before.

In the 1990s, when some of us proposed military action to stop an ongoing genocide by Russia’s Serbian client, opponents argued that it risked a Great Power war. For three years Bosnia’s turmoil continued until the terrible massacre at Srebrenica.

Then the U.S. began a series of airstrikes that Moscow was powerless to prevent, and three weeks later a peace conference began that brought the conflict to a close.

In Syria, the Russian alibi for inaction – which was accepted by the Obama administration – is even more self-evidently hollow. Russia had no response to the U.S. cruise missile strikes on the Shayrat airbase last April, nor the killing of 200 Russians who attacked a U.S. position in eastern Syria in February.

Israel has attacked shipments of advanced Iranian weapons and regime installations, even in the heart of Damascus, more than 100 times before a single jet was brought down by Assad regime fire two months ago. Jerusalem responded immediately by obliterating as much as half of the Assad air defenses. Russia did not even attempt to defend Assad and Iran.

There is no doubt President Trump is making policy in a highly disadvantageous situation after the previous administration’s pull-out from Iraq in 2011 and the pursuit of a nuclear deal with Iran that was paid for in regional concessions.

The effective ceding of Syria to Iran and Russia has left the U.S. few allies to work with in the country. The symbiotic sectarianism of Iran, ISIS and Al Qaeda has resulted in a wave of extremism and chaos that has spread to Europe, opening space for Russia to weaken the transatlantic alliance.

An earlier intervention would have allowed the U.S. to shape events more effectively. The manner in which the U.S. finally did intervene, attempting to wage war on ISIS without getting involved in the underlying conflict, has made the task of creating a regional order that is compatible with U.S. interests more difficult.

For example, America’s partner force in Syria, the Kurdish-dominated Syrian Democratic Forces or SDF – which currently holds a quarter of the country from which ISIS was cleared – is opposed by Turkey. However, the Kurds are our allies in this conflict and we should support them.

But managing these contradictions is much less damaging to U.S. national security than doing nothing. In January, the administration’s long-awaited strategy was announced. It involved the U.S. staying in Syria, mainly to guard against Iranian expansionism.

Less than two weeks ago, President Trump appeared to reverse course, saying that with ISIS’s territorial “caliphate” nearly wiped out, the U.S. would pull out of Syria “very soon.” The statement was soon walked back by the White House. This is welcome because such a policy would be misguided for the United States, and the end of any hope of containing and rolling back Iran.

A precipitate U.S. withdrawal would see the SDF – with all the training, money, and weapons supplied by the U.S. and its allies – seek protection by cutting a deal with Russia and/or Assad, whose regime is wholly dependent on Iran and its terrorist apparatus, the Islamic Revolutionary Guards Corps (IRGC).

Iran has imported tens of thousands of Shia Islamist fighters from around the region into Syria, and they are already encroaching toward the borders of Jordan and Israel.

If Iran gains unfettered access to the areas controlled by the SDF in eastern Syria, the land bridge stretching from Iran through Iraq and Syria to Hezbollah in Lebanon would be complete, and the Tehran regime would have an even greater ability to threaten key U.S. allies.

Defeating ISIS to make Iran the master of the Middle East is a solution worse than the problem.

Any meaningful counter-Iran policy must start in Syria. Despite the difficulty of the situation, the United States does have options.

The first and easiest thing the United States can do is to ensure that no territory controlled by its partner forces is handed over to the pro-Assad coalition.

As well as providing a geographic break in Iran’s “arc of control” – as new National Security Adviser John Bolton has called it – the U.S.-underwritten zone in eastern Syria contains important resources. These include oil that would allow Iran to stabilize its presence in the country and perhaps even make a profit from it. This must be prevented.

The U.S. has political and legal tools it can easily employ. Individuals associated with the systematic torture, rape and murder of prisoners can be named and sanctioned. The IRGC’s Quds Force should be designated as a foreign terrorist organization.

Since The Quds Force permeates Assad’s security sector, designating it as a terrorist organization would allow for the wide-scale application of sanctions on individuals and institutions that collaborate with it. This would make Assad regime-held Syria a pariah – North Korea on the Levant.

Over the long-term these and similar measures can weaken Assad and by extension Iran, but the situation is more urgent than that.

The U.S.’s response to the gassing in the Syrian city of Douma on Saturday should aim to damage Assad’s war machine in lasting ways. The Iran-Assad forces have been readying an offensive against areas near the Israeli border held by rebels that are among the most moderate and Western-friendly remaining on the battlefield. The U.S. has the power to stop that offensive.

To exact a serious price, all known Syrian chemical weapons sites must be destroyed, as well as key nodes of Assad’s “conventional” arsenal. The destruction of Assad’s air force would provide crucial relief to civilians and severely impair the offensive capabilities of pro-Assad forces. Missile infrastructure, Iranian militia bases, elite military units and the secret police should all be targeted as well.

All this would constitute the strong beginning of a policy that would help the Syrian people, and hurt Assad and his Iranian and Russian patrons and puppeteers.