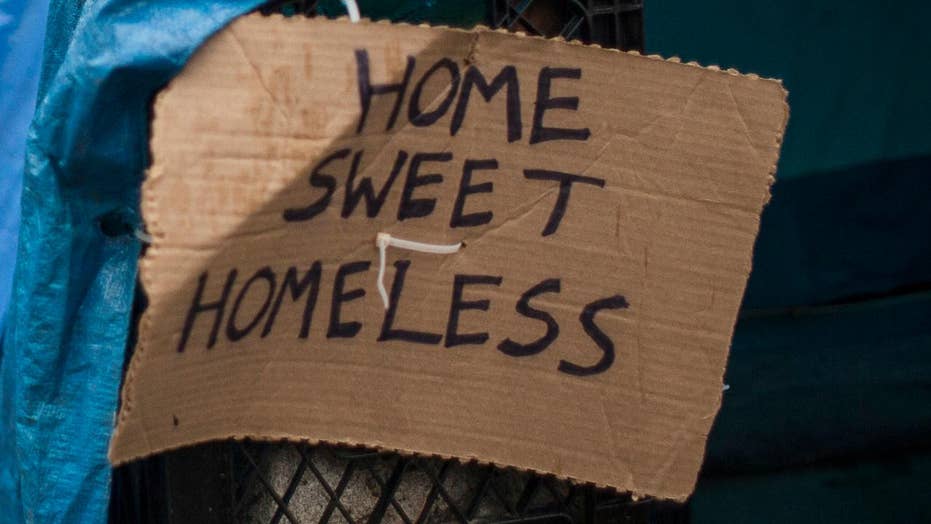 Critics fear a tax to clean up the city could actually clean out job growth; correspondent Dan Springer reports.

Seattle never learns. The city says it has a homelessness problem that is getting out of control and something needs to be done about it. But Seattle’s ultra-liberal politicians are making things worse by insisting on more bloated government to solve a problem bloated government created.

The housing crisis in Seattle is the fault of its government. The city has been on a nonstop rampage to declare itself the most progressive society in the world for the last few years. During its crusade that is killing jobs and making life miserable, city elected officials have enacted rules and regulations that make it almost impossible to build housing there.

Jeff Pelletier, of Board and Vellum Architects, points to the permits as one of the main drivers in the rise of housing costs in Seattle stating, “while there is a lot of benefit to a thorough review of your project, we are seeing tremendous cost and schedule increases from local building departments.”

One way to help solve the housing problem would be to build mid- and high-rise condominiums. On a plot of land that usually accommodates three to four single family homes, the city could allow developers to build projects that house more than 100 people, getting much more bang for the buck in land use.

But no, this is Seattle. Strict zoning laws have only given multi-family and commercial and mixed-use areas one-third of the land designated for residential use, driving up the price of single-family homes.

The city’s recently enacted minimum wage law is also having an impact on the housing problem. In 2014, Seattle’s extremely progressive City Council attempted to regulate prosperity by instituting a $15 minimum wage, to be gradually phased in.

Business owners warned about the economic impact the move would have, but not one person on the City Council listened. All voted for the job-killing regulation, showing no one on the Council has a basic understanding of economics.

This year the full $15 per hour minimum wage went into effect, but the impact was felt much earlier. A University of Washington team completed a study of worker pay, hours and benefits in Seattle last and found the law was a net loss for workers.

The study concluded: “Our preferred estimates suggest that the Seattle Minimum Wage Ordinance caused hours worked by low-skilled workers (i.e., those earning under $19 per hour) to fall by 9.4% during the three quarters when the minimum wage was $13 per hour, resulting in a loss of 3.5 million hours worked per calendar quarter. Alternative estimates show the number of low-wage jobs declined by 6.8%, which represents a loss of more than 5,000 jobs.”

Keep in mind this was before the full impact of the $15 per hour minimum wage could be felt, as the law only became fully implemented this year. The situation is going to get worse in Seattle.

So now that we know Seattle’s own laws created a shortage of housing in the city while at the same time reducing the amount of take-home pay for lower-income residents, what is the City Council’s solution? More government.

In 2017, King County and Seattle spent over $195 million to combat homelessness, which included city, county, state, federal and charity spending. Surely the massive amount of spending had an impact on the problem? No, homelessness actually increased last year.

But don’t worry, the City Council has a plan. It had the great idea to institute another tax, known as a “head tax.” The city is going to tax its largest business $500 for every employee. This money would then be used to build “affordable housing.” It is hard to see how that could be done with the current zoning laws, which helped start the crisis in the first place, still in place.

After the City Council voted 9-0 for the ordinance, business leaders spoke out, and Amazon paused construction on a project, pitting hard-working construction workers against do-nothing, full-time protesters. After some negotiating between the City Council and Mayor Jenny Durkan, the head tax was reduced to $275 for every employee.

This may seem like a win, but like everything in Seattle, all is not as it seems. Along with the lower rate, so far the allocation of the funds is non-binding. Meaning there is no plan to spend the money. It could easily be spent on non-homeless issues.

What Seattle has done is so poorly planned, even some of the homeless are calling out the city for its excessive spending.

Geno Minetti, currently living in his car, stated: "They're wasting the taxpayer’s money. If they get more; they'll waste more." It is a shame this man can see the problem and knows government spending is not the answer, but the people in charge only see taxation and spending as an answer to every problem.

Businesses in Seattle must now ask themselves some important questions. Is it worth expanding if the business will get taxed for succeeding? If Seattle doesn’t want my business to grow and expand, why should I move it or start it there?

The lunacy of Seattle never ceases to amaze. Only the left would watch its taxation, zoning, and employment laws create a crisis, then advocate for more of the same. Every city should pay close attention to what Seattle is doing, and do the opposite. If a city wants to increase its tax base, decrease poverty, and increase the quality of living, don’t be like Seattle.

Printus LeBlanc is a contributing editor at Americans for Limited Government.