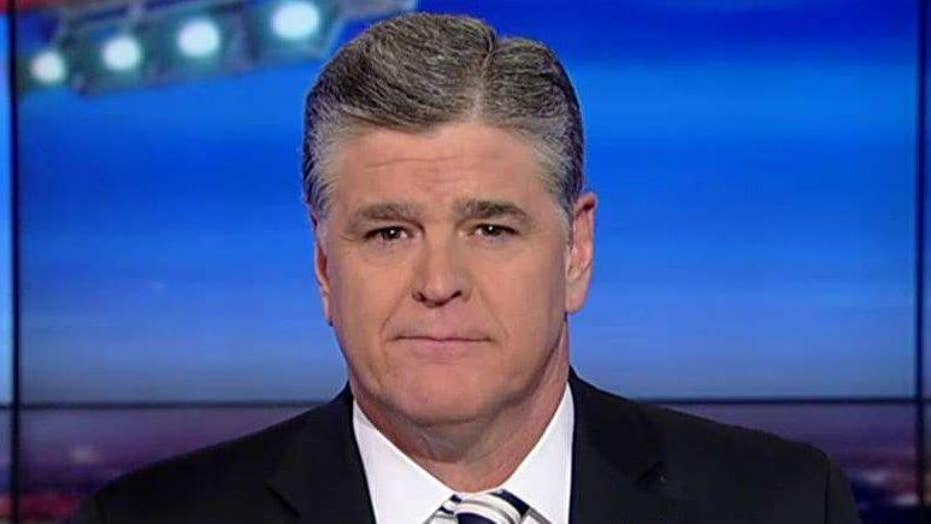 Hannity: The press has declared war on the American people

President Trump is once again showing he is no longer going to put up with the out-of-control left-wing media bias. And this weekend in Florida, the president once again took direct aim at these corrupt news organizations.

“The dishonest media, which has published one false story after another with no sources, even though they pretend they have them, they make them up in many cases,” Trump said over the weekend. “And they've been calling us wrong now for two years. They don't get it, but they're starting to get it, I can tell you that. They've become a big part of the problem. They are part of the corrupt system.

Trump’s broadside continued as he labeled the press an “enemy of the people” and rallied his supporters directly – instead of allowing his words to be filtered through the abusively biased media.

“We are not going to let the fake news tell us what to do, how to live or what to believe,” he said to thunderous applause. “We are free and independent people, and we will make our own choices.”

The alt-left propaganda media responded in a pathetically predictable fashion.

See what he did there? And CNN’s Chris Cuomo had an ominous warning about the possible consequences of Trump calling out the media.

“As long as American democracy remains healthy, there will be reporters willing to pursue the truth, even if that means incurring the wrath of the most powerful person in the world,” Karl said. “A free press isn't the enemy of America, it's a big part of what makes America great.”

We’re all for a free press, but how about an honest one that covers President Trump fairly? Remember how WikiLeaks exposed the rampant, rampant collusion between the press and the Clinton campaign? Allowing Democratic Party officials to edit their stories and giving Hillary Clinton debate questions in advance?  They had a literal stake in the election.

These left-wing news outlets thought they'd be able to stop Donald Trump from becoming president but now, instead of admitting they were wrong, they have now doubled down on their attacks against President Trump.

On election night, as the realization crept in that Donald Trump would be the next president, it was like a funeral at every one of these networks. ABC’s Martha Raddatz, who hosted a debate, actually cried.

According to MSNBC’s Lawrence O’Donnell, it wasn’t just Raddatz who was reduced to tears by the results of a free and fair election.

“America is crying tonight,” he said. “I'm not sure how much of America, but a very, very significant portion. And I mean literally crying. I've gotten texts from a college campus about a dorm that's just in tears.”

Fast-forward to today and the abusively biased media has not changed and has not learned anything. They have not apologized for their collusion or for their dishonest reporting. Even worse, they are ignoring President Trump's accomplishments in just 30 days. They are never going to tell the American people the truth.

So far, President Trump has ordered federal agencies to ease the burden of ObamaCare, withdrawn the U.S. from the flawed Trans Pacific Partnership trade deal, implemented a government hiring freeze and banned aid that helped foreign countries provide abortions. He has issued five executive actions advancing the Keystone and the Dakota Access pipelines, which will create jobs and lead to energy independence. He has announced construction of a border wall, ordered federal funding stripped from sanctuary cities, issued executive actions on extreme vetting and ordered rebuilding of our military.

Trump has ordered up a plan to defeat ISIS, instituted a five-year lobbying ban for administration officials and nominated an originalist to the Supreme Court in Judge Neil Gorsuch. He signed a House joint resolution to help the coal industry get back into business, sanctioned Iran over its ballistic missile program, negotiated lower prices on F-35 fighter jets and Air Force One and met with top CEOs to incentivize them to create jobs here.

President Trump signed executive orders to protect police officers and target drug cartels. He launched a council for the advancement of women entrepreneurs. He has called or met with more than 30 foreign leaders so far and put together a first-class cabinet.

The news media are at war with the president because their little egos are bruised, and they have been exposed. And they're waging this battle by focusing in on superfluous issues, citing unnamed sources. They are basically throwing around allegations in the hope something may stick one day, and they go out there and report breathlessly about whatever the tweet is of the day.

The mainstream media's audience is not you, the American people. They are not the forgotten men and women in poverty, on food stamps, out of the labor force, who can't buy a house and struggle to put food on the table and send their children to good schools. Out-of-touch liberals know nothing about you, nothing about your problems, don't seem to care about the millions more in poverty, on food stamps and out of work, the people that are struggling.

That's why they didn't think that Donald Trump could win. It's why they can't for the life of them understand why he is connecting with the American people.  And it is why President Trump calls them for what they are: Purveyors of fake news.