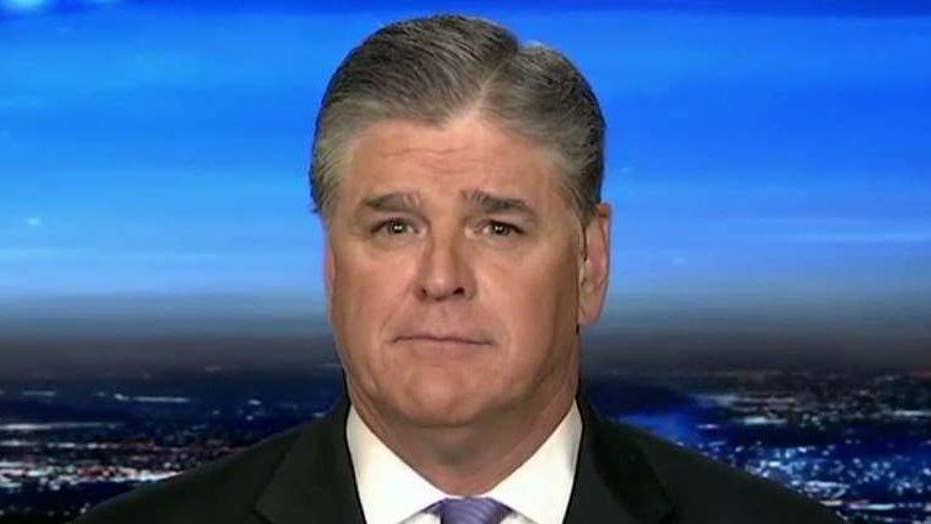 Hannity: 5 major forces are aligning to take down Trump

The destroy Trump propaganda media, the Washington deep state, Democrats, establishment Republicans and never Trumpers are now working together in an unprecedented attack against a sitting president

The Washington Post is alleging that President Trump gave the Russian foreign minister and ambassador classified information while they were visiting the White House last week, and despite denials from people who were in the room, the alt-left, hate-Trump media is going berserk – again.

The anti-Trump press believes it smells blood in the water. They can’t control themselves.

“The White House reeling from another Russia crisis, an unforced error at the hands of President Trump,” CNN announced.

“The damage to U.S. intelligence interests is being viewed as incalculable this morning,” the network’s senior Washington correspondent, Joe Johns, said.

“If true, this could be the most significant and dangerous mistake of the Trump presidency,” ABC’s “Good Morning America” said.

Oh, hyperventilating breathlessness! But let's talk about the Washington Post for a minute. This is the same newspaper who has on their home page the slogan, "Democracy dies in darkness." Just last week, the Post reported that Deputy Attorney General Rod Rosenstein threatened to quit because of Comey's firing. Oh, guess what? Rosenstein said it never happened.

But that wasn't the only story The Washington Post got wrong last week. After Comey was fired, The Post reported this headline: "Comey sought more resources for Russian probe just days before he was fired by President Trump, officials say." Wrong again. Acting FBI Director Andrew McCabe, when testifying before Congress last week, said he was unaware of such request and that the investigation is adequately resourced.

The destroy-Trump media is one of five powerful forces aligned against the president. They are joined by the destroy-Trump Democrats, the Washington deep state establishment, weak, establishment Republicans and never-Trumpers. These groups are working together in an unprecedented attack against a sitting president.

They're all suffering from Trump derangement syndrome. And as we have been continually pointing out right here on this show, the truth does not matter to people that call themselves journalists! They are agenda-driven. They're radical left-wing ideologues who are more than happy to push and advance Democratic talking points and political conspiracies.

Countless members of the destroy-Trump media were caught colluding with the Clinton campaign. They wanted to get Hillary Clinton elected, which explains why they have been perfectly willing to say anything, do anything, regardless of how insane, conspiratorial it may sound, all in an attempt to damage the president.

Sore loser Democrats are still in total and complete denial. They can't believe that Donald Trump won and Hillary lost, that Donald Trump's the president. They're going to obstruct every single agenda item of the president at every single turn. Consider the firing of James Comey. Democrats hated the guy's guts.  They were calling for his head for months, and they even blamed Comey for Hillary Clinton's election loss. Then President Trump, he fires the former FBI director. All of a sudden, Democrats change their tune, feigning moral outrage.

Then you've got the third alliance. The deep state in Washington is targeting the president on a daily basis, by leaking information. That’s where the Washington Post got its latest fake news story.

No. 4 in this alliance is the establishment Republicans. These timid and feckless folks never supported the president - their party’s own candidate - during the campaign.

Finally, we have never-Trumpers. These so-called Republicans didn't like President Trump during the election, and now they seem to want him to fail so they can say to themselves they're right. They're desperate to become relevant again.

It's time to call out this alliance, these five groups, for what they are.