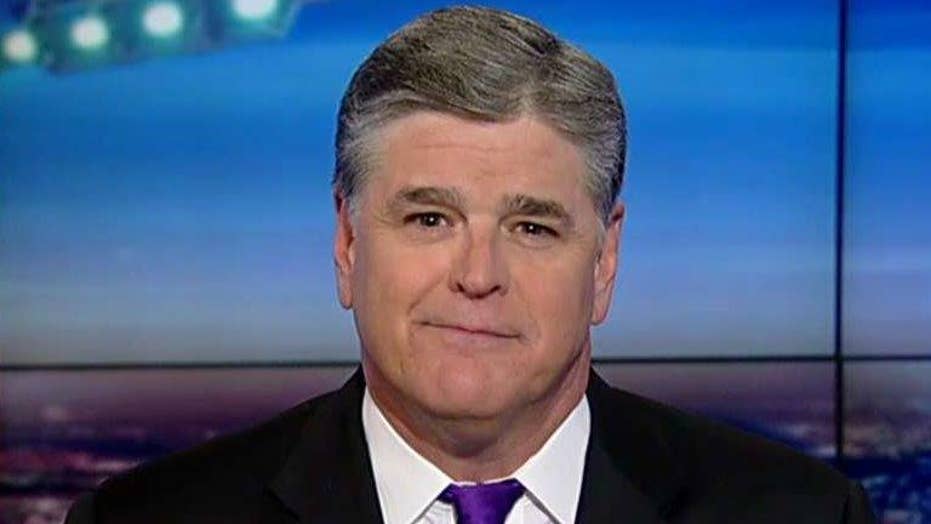 Hannity: Comey was fired because he didn't do his job

Deranged, liberal crackpots are at it again. They are using President Trump's very sound decision to fire FBI Director James Comey to push all kinds of bizarre conspiracy theories.

It was to stop the investigation into Russian interference in the election. He put others up to it to settle a score. He fired Comey during a temper tantrum.

Well, actually, there is a very simple explanation, and Trump told it to anyone willing to listen.

“He was not doing a good job,” Trump told reporters Wednesday.

And Trump has the facts on his side. Comey failed the American people. He disrespected the Constitution. He made a mockery out of the rule of law and equal justice under it by carving out a separate justice system for Bill and Hillary Clinton.

In fact, it's why not that long ago, Democrats were calling for Comey's head. But those same, alt-left, destroy-Trump Dems are now suffering a massive case of selective amnesia and feigning moral outrage.

“It's a grotesque abuse of power by the president of the United States,” CNN Legal Analyst Jeffrey Toobin said. “This is the kind of thing that goes on in non-democracies.”

MSNBC’s Chris Matthews called it a “whiff of fascism.”

They compared it to President Nixon’s firing of special prosecutor Archibald Cox, back in 1973. But they didn’t really have to go back that far: In 1993, President Clinton fired the FBI director. And Comey, in a letter to his former colleagues, acknowledged the president had every right to fire him at any time, for any reason.

We all know the liberal media wants to destroy President Trump. They want him out of office, and they will do and say anything to make that happen. They are the very folks who colluded with Hillary Rodham Clinton during her campaign and cried when she lost.

The media and the alt-left Democratic establishment suddenly loves Jim Comey! It’s as if they think we don’t remember what they were saying about him for the last year, when simply investigating Hillary Clinton’s illegal, secret server was such an affront to democracy.

“He's got a big burden of proof, so to speak, on him for why he did what seems to be such an appalling act that goes against the tradition of prosecutors at every level of government,” Senate Minority Leader Chuck Schumer said back in October. “It was … hard to believe that Comey, who I thought had some degree of integrity, would do this.”

House Minority Leader Rep. Nancy Pelosi thought Comey was unfit to direct the FBI, apparently right up until the time Trump agreed with her.

“I think he made a mistake on this,” she said last year. “And he clearly has a double standard. In these jobs, if you're not in it for a while, you can't take the heat. And I think he just couldn't take the heat from the Republicans. It's really unfortunate because I do believe he is a good person. Maybe he's not in the right job.”

And Harry Reid, who was the outgoing leader of Senate Democrats, was scathing in his criticism of Comey back in December.

“I am so disappointed in Comey,” Reid said. “He has let the country down for partisan purposes. That is why I call him the new J. Edgar Hoover because I believe that."

Need more proof the Democrats are full of it? Just last week, Hillary Clinton blamed Comey for her election loss.

“I was on the way to winning until a combination of Jim Comey's letter on Oct. 28 and Russian WikiLeaks raised doubts in the mind of people who were inclined to vote for me but got scared off,” she said on May 2.

There is no getting through to these alt-left, radical kooks. They're detached from reality and they suffer from Trump derangement syndrome.

Sadly, there's no cure. They will continue to suffer for the next four years. Or will it be eight?