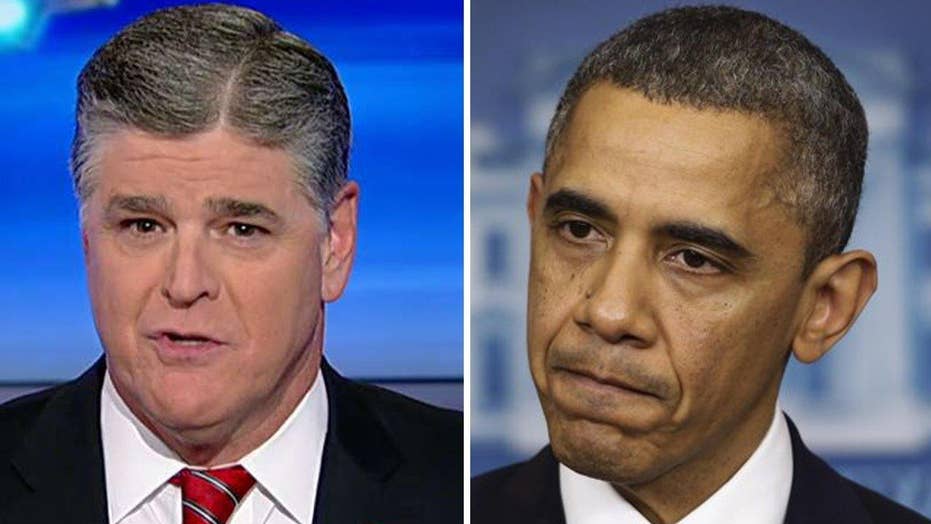 Hannity: Obama came in a crybaby and is leaving a crybaby

President Obama continues to whine his way out of the Oval Office, continuing to blame everybody but himself for eight years of failed policies.

As he contemplates his own dismal record, the president is taking aim at the usual suspects: talk radio and Fox News.

“Well, what is true is that the ability of Republican leaders to rile up their base -- helped along by folks like Rush Limbaugh and some commentators on Fox News -- I think created an environment in which Republican voters would punish Republicans from cooperating with me,” Obama said in a recent interview. “That hothouse of back-and-forth arguments and really sharp partisanship I think has been harmful to the country.”

President Crybaby is once again blaming everyone else for the divide in the country. It makes for a good talking point, but it's not the truth. He can try to claim the mantle of civility just like he attempted to do in his farewell address last week, but the facts say otherwise. After all, President Obama has led the way when it comes to divisive rhetoric. Consider some of his greatest hits.

“It's not surprising then that they get bitter, they cling to guns or religion or antipathy towards people who aren't like them,” he said of Republicans back on April 6, 2008.

On Oct. 26, 2010, Obama stated where he thought Republicans belonged.

“We can't -- we don't mind the Republicans joining us, they can come for the ride, but they've got to sit in back,” he said.

And how about this willful mischaracterization of conservatives’ positions on key issues:

“And then you got their plan, which is let's have dirtier air, dirtier water, less people with health insurance,” he said on Oct. 17, 2011.

As recently as last year’s election, Obama – the same man now decrying what he considers a lack of civility, tried to smear President-elect Donald Trump as a Klan sympathizer.

“If you accept the support of Klan sympathizers before you are president, you will accept their support after you're president,” he said last Nov. 3.

And there's more. While running for president in '07 and '08, Obama blamed George W. Bush for all of America's problems. And not surprisingly, once President Obama got into office, he did the same thing for eight straight years. He never takes responsibility. Here are just a few examples.

“We were inheriting so many challenges... we knew this was going to take time because we got this big, messy, tough democracy,” he complained on Aug. 3, 2011.

On March 4, 2009, Obama complained, “These are far from the best of times. By any measure, my administration inherited a fiscal disaster.”

Obama’s blame game has not spared yours truly. Should I take this personally or feel honored?

“In 2012, Latinos voted in record numbers,” he said on Oct. 2, 2014. “The next day, even Sean Hannity changed his mind and decided immigration reform was a good idea.”

“Rudy Giuliani said Putin is what you call a leader,” he said on April 3, 2014. “Mike Huckabee and Sean Hannity keep talking about his bare chest, which is kind of weird.

“With respect Sean Hannity, I didn't know that he had invited me for a beer,” Obama said on Feb. 9, 2009. “His opinion of me does not seem to be very high, but I'm always good for a beer.”

President Obama will officially be out of power in three days. He's leaving behind a huge mess that President-elect Donald Trump is going to be forced to clean up.

But it appears that Donald Trump will be taking a much different approach than Barack Obama. Instead of doing nothing and blaming his predecessor for everything, President-elect Trump looks like he's actually going to try and fix the country's problems.