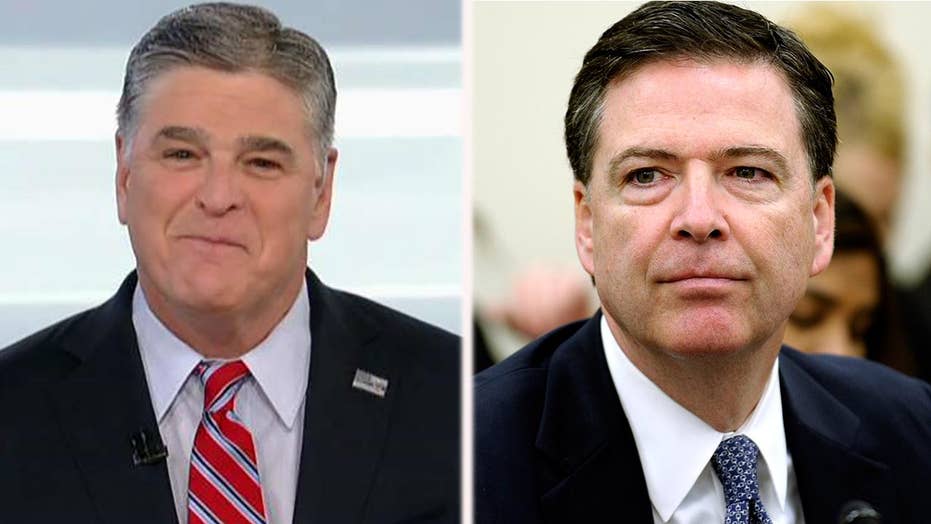 Hannity: Comey is ready to cash in on his hatred for Trump

With a weeks' long book tour likely to consume the fake news media, prepare to see James Comey everywhere, except answering questions under oath in front of Congress.

No wonder disgraced former FBI Director James Comey was so bad at running the bureau: He can't tell a mob boss from a duly elected leader of the free world.

Comey showed his confusion in his first stop on the tour to promote his new book: A sit-down with Clinton sycophant-turned ABC so-called news journalist George Stephanopoulos. It hasn’t aired, but a promo they are breathlessly running tells you all you need to know.

“How strange is it for you to sit here and compare the president to a mob boss?” Stephanopoulos asks a stone-faced Comey, who you may remember admitted leaking FBI documents long after he purposely botched the probe of Hillary Clinton’s illegal email server.

“Are there things that you know but haven't said that could damage President Trump?” Stephanopoulos asks.

“Was President Trump obstructing justice? Should Donald Trump be impeached?” he continues.

Since Comey can’t distinguish between homicidal criminals and a politician he disagrees with, it is worth reminding him what an actual mob boss looks like.

Hard questions between a couple of guys who hate President Trump. But ‘mob boss?’ Of all people, shouldn’t the former head of the FBI - the person responsible for taking down actual deadly criminal gangs - know better to make an outrageous comparison like that?

Since Comey can’t distinguish between homicidal criminals and a politician he disagrees with, it is worth reminding him what an actual mob boss looks like. Al Capone plagued society with illicit gambling, prostitution, tax evasion and an untold number of murders. Lucky Luciano was responsible for widespread extortion, prostitution rings, bootlegging and murder. John Gotti was convicted of 13 murders, and also profited from racketeering, tax evasion and gambling.

What does Donald Trump have to do with any of them? If Comey is really looking for mobsters at 1600 Pennsylvania Ave., he missed one - the Clinton crime family.

Bill Clinton was accused of severe sexual misconduct, harassment and even rape by Juanita Broaddrick. We know he lied under oath and we know he paid Paula Jones. We know he was impeached. Hillary Clinton surely committed crimes, and would have been charged if we had equal justice under the law. She mishandled national secrets on that illicit private server, obstructed justice and destroyed evidence.

The Clinton crime family included numerous associates – Cheryl Mills, the Hillary consigliere to whom Comey granted immunity in exchange for nothing. Huma Abedin, her underboss, who also mishandled national secrets, even handing them over to her pervert husband, former Democratic congressman Anthony Weiner.

There’s sketchy Terry McAuliffe, the former governor of Virginia. He directed his political action committee to donate hundreds of thousands of dollars to the state senate campaign of Jill McCabe, the wife of, then-Deputy FBI Director Andrew McCabe. Fortunately for Americans, McCabe is now off the federal payroll. But when McAuliffe was bankrolling his wife’s failed campaign, he was supposed to be investigating Hillary.

Loretta Lynch qualifies as a made member of the Clinton Crime Family, too. The former attorney general had a secret meeting on an airport tarmac with Bill Clinton in Phoenix just days before Comey cleared Clinton. One wonders what kind of order Bill issued as Lynch kissed his ring.

The Clinton Crime Family includes enforcers, like Sid 'Vicious' Blumenthal, who shopped the bogus anti-Trump dossier around to spark a phony investigation. And Debbie Wasserman Schultz, who helped rig the primary for Hillary Clinton while she ran the Democratic National Committee.

Comey, who was at best oblivious to the Clinton Crime Family as it ran wild in Washington, has operated a bit like a gangland don himself, if we’re allowed to use the same license he does. During his tenure at the FBI, he agreed to Lynch’s order to soft-pedal the Clinton email investigation by calling it a “matter.” He and Trump-hating FBI agent Peter Strzok wrote an exoneration of Clinton in May, months before they even interviewed her or other witnesses for their investigation. In the parlance of La Cosa Nostra, they fixed the case.

We also know Comey signed off on multiple FISA warrants to spy on a Trump campaign associate. To do that, he worked with loyal soldiers Rod Rosenstein, Sally Yates and others.

Since James Comey is so loose with his mafia analogies, let me make him an offer he shouldn’t be able to refuse: Come on my show to promote your book. I'll ask tough, but fair questions to which the American people deserve answers.

With apologies to Don Corleone, come on my show, Jim. Act like a man!