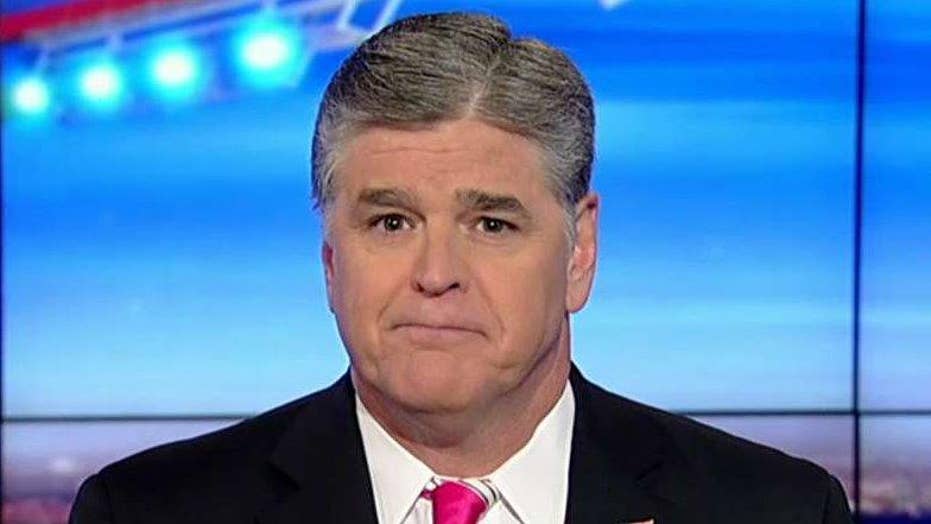 Hannity: I refuse to let conservatives be silenced

It's time to take a stand against liberal fascists

We are at a huge turning point when it comes to freedom of speech in the United States of America, and it is time to take a stand against liberal fascists out to silence conservative voices.

Violent, radical snowflake liberals at University of California Berkeley have succeeded, at least for now, in shutting down another conservative speaker. Ann Coulter was supposed to give a speech on that campus tonight, but the threat of violence has scuttled those plans. Berkeley, which in the 1960s, fashioned itself as the home of free speech, is now the home of fascistic intellectual intolerance.

The idea that the alt-left is tolerant and inclusive is a big myth and lie. In fact, the First Amendment means nothing to these people. It's just a yellowed parchment they care nothing about. Their goal is simple: Shut down every conservative voice in America, by any means necessary.

Ann Coulter is only the latest target this week. Liberal fascists are carrying out a well-funded and carefully orchestrated smear campaign to try and take down President Trump and anybody and everybody that supports him and his policies. I've also become a target, as the alt-left media repeats lies about me even though the original liar has since recanted. Why fact check when it might get in the way of ruining my career? They want to destroy me and get me off the air, once and for all.

It’s not just about me, but by fighting back, I am hoping to use my case to expose what's really happening. In case you don’t know, here’s what happened. Six days ago, just two days after Bill O'Reilly parted ways with the Fox News Channel, an individual with serious and glaring credibility issues fabricated completely untrue, ridiculous claims about me that go back more than a decade.

The alt-left press could easily have checked this person out and learned it wasn’t the first groundless attack against me. But that could have gotten in the way of their agenda. They ran with it.

"Sean Hannity denies right-wing blogger's sex harassment claim," was NBC News’ headline. "Is Hannity next to fall? Fox guest says the anchor tried to pressure her into hotel room sex," was the headline on a website called Raw Story, and by the way, the individual didn’t even say that in the first place.

So far, none of these outlets have updated their headlines to correct the story and tell their viewers or their readers that this highly questionable individual has since recanted these completely false claims.

I have hired a killer team of lawyers and investigators, and we are laying out a war strategy that's going to hold accountable every media outlet that smears me with lies. I’m told that these media outlets have a basic, fundamental obligation to do rudimentary fact-checking instead of just taking the word of one individual. In my case, they went for the cheap headline without even doing a simple Google search which would have undermined the entire story.

I may end up suing some of these outlets because I have had enough. These attempts to destroy and silence conservative voices need to stop or Fox News Channel, as the only news network that gives President Trump a fair shake, goes away. Your favorite talk show hosts go away. Talk radio goes away.

I’m fighting back. And I hope by doing so, I show others that we don’t have to rollover for the liberal fascists and dishonest media that are out to silence free speech in America.