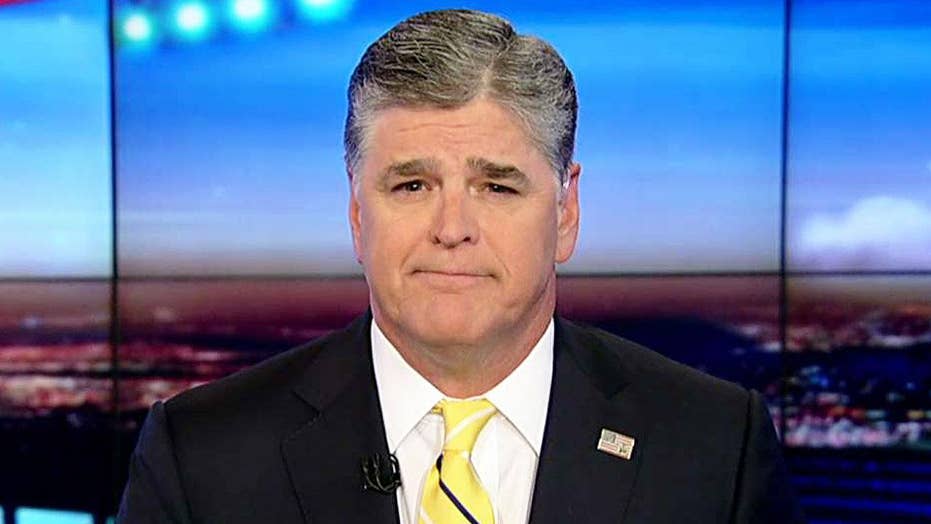 Hannity: America at a turning point

The American people have a profound choice to make

America is at a turning point, with forces now forming an alliance to try and remove President Trump from office. It's that serious.

Here are the five dangers faced by President Trump, and indeed all Americans:

All five factors rely heavily on the media relentlessly peddling one of the biggest lies in American history, that the president colluded with the Russians during the 2016 election. These so-called journalists  are little more than left-wing ideologues with media megaphones. Remember, they're the ones that colluded with Hillary Clinton in the 2016 election, a fact exposed by WikiLeaks.

The destroy-Trump media are not the only ones whose collusion narrative has completely crumbled. Here are some recent quotes from key Democrats admitting there’s “no there there.”

“The allegation, of course, is that the Russians and the hacking and dumping of documents in the election had essentially relationships with Trump campaign people… but I'm not prepared to say that there's proof you could take to a jury,” Rep. Adam Schiff, D-Calif., told ABC’s George Stephanopoulos.

Sen. Joe Manchin, D-W. Va., made a similar comment: “You know, we haven't seen any of that whatsoever, George. We've been looking and showing everything that they possibly have,” he said. “That has not led to that.”

The next threat, and perhaps the most dangerous, is the deep state. That is the unelected fourth branch of government, consisting of a lot of Obama holdovers, anti-Trump bureaucrats who now are routinely targeting the president, his administration with selective leaking. This deep state works closely with the destroy-Trump media to disseminate false information about the president and his administration.  And what's even more dangerous, more sinister about the deep state is that they're willing to break the law by leaking classified information. Just ask Gen. Michael Flynn, who was spied on, unmasked and ruined by the deep state.

The most dangerous denizen of the deep state may be fired FBI Director James Comey. He admitted under oath he had his memo leaked to The New York Times. His goal? He wanted the appointment of a special counsel. The deep state obliged, once it got Attorney General Jeff Sessions to recuse himself out of their way.

Mueller's investigation is quickly spiraling out of control. President Trump was right when he called it the greatest political witch hunt in American history. Mueller's sole purpose was to investigate so-called Trump-Russia collusion, but now he is digging into finances, Jared Kushner and obstruction of justice. And he's not going to stop there. Why? Because there is no Trump-Russia collusion. He has to move on to other things to justify his job.

Mueller has massive conflicts of interest conflicts of interest should recuse himself. He's incapable of carrying out a fair and impartial investigation for several reasons, not the least of which is he's best friends with James Comey. And then there's the fact that members of Mueller's investigative team, lawyers who donated big, big bucks to Barack Obama and Hillary Clinton. One of the lawyers Mueller has hired was Clinton's attorney at the Clinton Foundation!

The longer these attacks continue, the longer it will take for you, the American people, to benefit from what from what you voted for, the president's policies and agenda. All of this is now creating a very clear, present danger to the country. The left is suffering well beyond Trump derangement syndrome. It's completely unhinged.

This is now reaching a point of no return.  It's beyond serious. If these forces are successful, this country will not survive. If they continue with lies, propaganda, misinformation and outright conspiracy theories, where do the people go to get their country back?