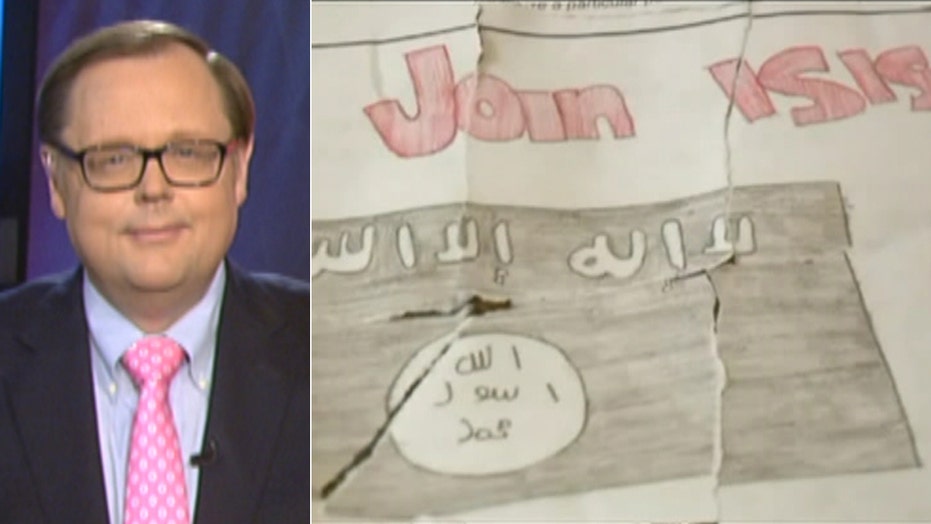 Freshmen in a World Civics class were told to make a propaganda poster for the Islamic State.

Are American public schools on the verge of becoming taxpayer-funded Madrassas?

In 2001 the founder of the Institute on Religious and Civic Values boasted about a covert plan to conduct a "bloodless" revolution inside American public classrooms – promoting an increased emphasis on the Islamic faith.

I wrote extensively about their plans to wage a stealth academic jihad in my book, “God Less America.” Read the chapter titled, “One Nation Under Allah.”

Still, it might surprise many moms and dads at the extent of Islamic indoctrination that’s infected their local public schools.

So it’s unconstitutional to sing “Amazing Grace” but school kids can sing praise songs to Allah?

Take, for example, what happened this week in Huntington Beach, California. A group of seventh graders were forced to learn a song promoting Islam.

It seems a teacher, who moonlights as an aspiring songwriter, crafted some lyrics to promote the Islamic faith:

They can make an explosion.

And the teacher used the melody of a song titled, “This is My Fight Song.”

Parent Nicole Negron posted her concerns on Facebook after her son brought home a notebook that included a stick-figure man saying, “Believe in Allah! There is no other god.”

“I believe that by singing this song, the children feel comfortable believing that Allah might be the only god and maybe that they should start following him,” she told CBS Los Angeles.

The local school district called the song “unfortunate” – especially in the aftermath of the Muslim terrorist attacks in Paris.

“It was not the intention of the teacher to incite, anger or offend,” Superintendent Carol Hansen told the Orange County Register.

Even the folks at the local chapter of the Council on American-Islamic Relations frowned on boys and girls singing in four-part harmony about Muslims making an explosion.

“Obviously the teacher could have had a better choice of words,” Ojaala Ahmad told the newspaper. “Those [lyrics] were very open to interpretation.”

So it’s unconstitutional to sing “Amazing Grace” but school kids can sing praise songs to Allah?

You would think the atheists and agnostics and freethinkers would be outraged over such Islamic indoctrination. You would think they would’ve already dispatched their lawyers – demanding they cease and desist.

But as we all know – the atheist, agnostics and freethinkers only attack Christians.  As the songwriter one wrote, I suspect they turn a blind eye to the Muslims because they fear someone might “make an explosion.”

Meanwhile, freshmen at Utah’s Salem Junior High School were instructed to create a propaganda poster for terrorist organizations like the Islamic State.

CBS News reports the front page of the project lists “eight reasons why young Muslims join ISIS” and the back page required student to draw a “terrorism propaganda poster.”

I can only imagine what the kids came up with: “ISIS: It’s a Blast!” “Kill Infidels By Day, Ride Camels at Night!” “Join ISIS Today and Get a Free Reversible Suicide Vest!”

Well, it turns out parents had a problem with their children becoming a de facto public relations firm for Islamic radicals.

The Nebo School District canceled the assignment and apologized. It turns out the lesson was not approved by the school nor was it part of any official curriculum.

“She [the teacher] wanted the students to understand how propaganda can be wrong and lead people incorrectly,” spokesperson Lana Hiskey told CBS News.

“She was just very enthusiastic and wanted students to understand that propaganda is not good.”

The district said the lesson was meant to help students understand the goals of terrorist groups.

It's bad enough we have apologists for radical Islam in the White House, but to have them in our school houses is simply unacceptable – and downright dangerous.