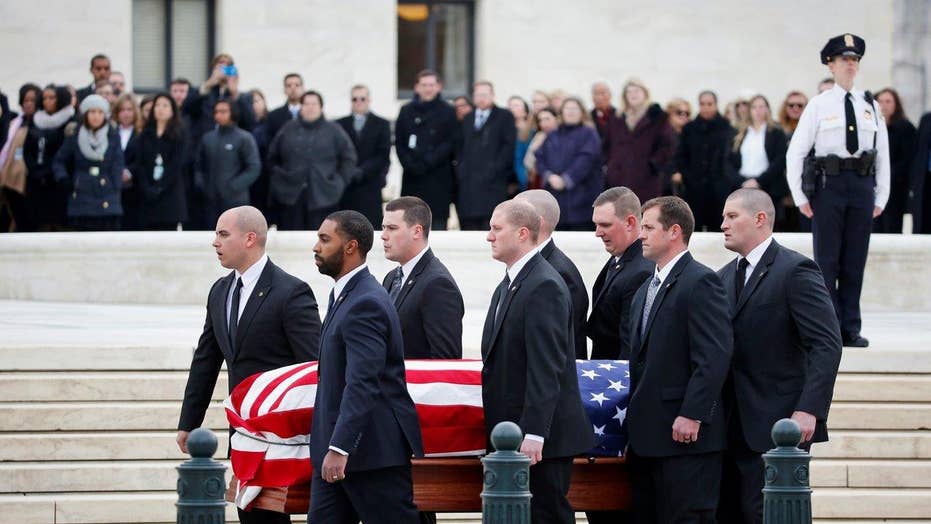 After the tragic and untimely death of Justice Antonin Scalia, the nation has before it the question of whether to fill his seat now or only after the people have spoken in November. On that question, those of us who knew him and knew his deep respect for the place of politics in our constitutional order know that he would have been the first to remind us that the president may nominate his replacement, but the Senate’s power to consent, or not, is equally important and equally to be respected.

Far more important than that immediate question, however, is whether Justice Scalia’s legacy of respect for the written Constitution and the limited government it authorizes will continue to animate the nation’s highest court, or whether instead the Court will join the political branches as handmaiden and move us ever closer to the vision President Obama and his party have been pushing now for nearly eight decades.

We need only look to those of Mr. Obama’s persuasion who would succeed him for the particulars of that vision. Driven by identity politics and class warfare, and informed by a medieval understanding of economics, they would make America look like the rest of the world—a world from which so many of us have fled. They rail against our present economic straits, especially for the young, yet would only double down on the very policies that have brought us here and so endanger our future. Answering always the same, their solution for government created problems is more government programs.

Justice Scalia had little patience for that vision, but he was a study in judicial evolution. He arrived at the Court of Appeals for the District of Columbia in 1982 a staunch friend of the free market but also a strict disciple of judicial restraint, the view then animating conservatives that judges should defer to the political branches in all but the clearest cases of constitutional abuse. Thus, in a famous debate two years later with his former University of Chicago colleague, Richard Epstein, over whether judges should better protect economic liberty than they had done in recent decades, Scalia argued that that should happen only if facilitated by the creation of “a constitutional ethos of economic liberty,” which he did not see. Rising to the occasion, Epstein pressed Scalia “to pursue, energetically, the tasks that our Constitution assigns to him.”

And so the issues were joined in a struggle that had begun a decade earlier at Chicago and would continue to the present—between conservatives urging judicial restraint, against the excesses of the Warren and Burger Courts, and libertarians urging judges to engage more fully in enforcing the Madisonian vision of constitutionally limited government. As that debate evolved increasingly in the direction of greater engagement, so too did many of the judges Presidents Reagan, Bush 41, and Bush 43 appointed, including Justice Scalia.

In 1993, for example, Scalia joined us at Cato for an informal luncheon discussion where I asked him if the Court was ever going to revive the doctrine of enumerated powers as we’d been urging—the bedrock principle that Congress has only limited, enumerated powers, the rest belonging to the states or the people, as the Tenth Amendment says. “Oh we lost that battle a long time ago,” he responded. Yet two years later the Court held, for the first time in 58 years, that Congress had exceeded its power to regulate interstate commerce when it enacted the Gun-Free Schools Act of 1990—and Scalia was on the right side of that 5-4 decision. And two years after that he would write the 5-4 opinion holding that Congress had no power to dragoon state officials into carrying out federal functions.

Justice Scalia’s federalism was not entirely consistent. Nor did he ever wholly embrace the vision of constitutional liberty that many of us have urged. He is famous, however, for holding that the Second Amendment protects an individual right to keep and bear arms. That again was a 5-4 decision, as often were his property rights rulings. Thus, he held that South Carolina could not provide its citizens with various goods by prohibiting a man from building on his property, the result of which was to wipe out the million dollars he’d paid for it. Shockingly, four justices would have allowed that—the same four, ideologically speaking, who would have allowed government restrictions on religious liberty, school choice, campaign finance, and so much more.

Today, the complaint about an activist Court more often comes from progressives who see that branch as impeding their plans for ever more government. Mr. Obama should know: more than any other administration, his has lost before the Court more than half the time, many of the most important cases by a single vote. Is it any wonder that he wants to fill Justice Scalia’s seat as quickly as possible, or that he is already trying to shame Senate Republicans against a filibuster, the very tactic he himself employed against then-Judge Samuel Alito? And that was not a lame-duck year.

Given the profound implications for the nation’s future of this president’s filling this seat, it is imperative, especially after the people spoke so clearly in 2014, that they be allowed to speak once more about our future before this seat is filled.

Roger Pilon is vice president for legal affairs at the Cato Institute, founding director of Cato’s Center for Constitutional Studies, and publisher of the Cato Supreme Court Review.