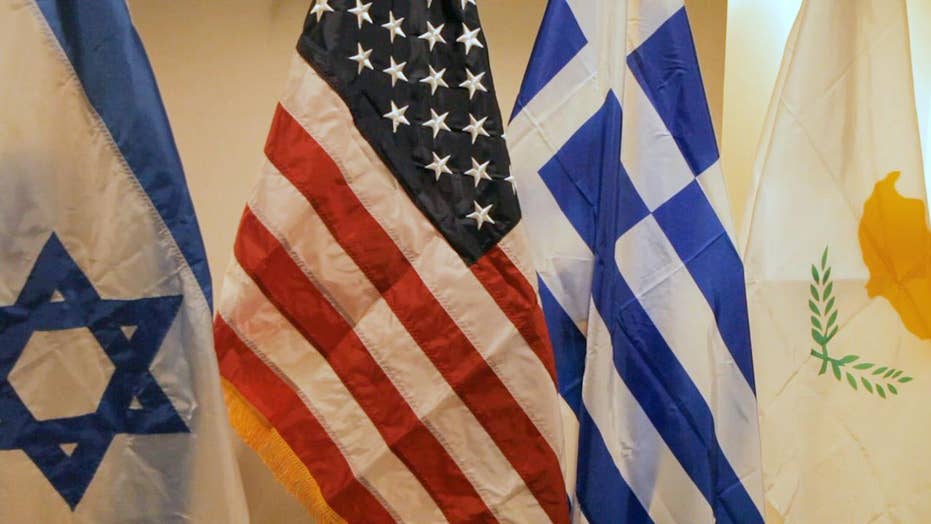 Endy Zemenides, David Harris, and Nia Yancopoulos discuss the Israeli-Greek-Cypriot Alliance and how it can help U.S. interests and security on a worldwide scale

According to the U.N.'s top human rights body, Israel is the worst human rights violator in the world today. That’s the result of the latest session of the UN Human Rights Council which wrapped up in Geneva on Friday by adopting five times more resolutions condemning Israel than any other country on earth.

President Trump’s administration is currently a member of this reprehensible body. To borrow Elie Wiesel’s counsel to President Reagan not to pay his respects at a German graveyard containing Nazi SS remains: “That place, Mr. President, is not your place.”

The Bush administration refused to join the Council when it was created in 2006.

On March 31, 2009, President Obama – fully aware of its entrenched anti-Israel and anti-Jewish bias – made jumping on board one of his very first foreign policy moves. Moreover, in an unscrupulous attempt to control his successor, the former President obtained yet another three-year term for the United States on the Council that began on January 1, 2017.

If President Trump were to choose a swift departure from the Council as one of his very first foreign policy moves, it would demonstrate a principled reset of American values and priorities on the world stage. March 31, 2017, the anniversary of Obama’s decision, would be an auspicious date to make that point.

The reasons for leaving are many. Here are a few:

The Council plays a leading role in the demonization and delegitimization of the Jewish state by the United Nations.

In its history, the Council has condemned Israel more often than any other of the 192 UN states. Comparative totals after this session’s pogrom tell the story:  Israel – 78 resolutions and decisions, Syria – 29, North Korea – 9, and Iran – 6.  As for Saudi Arabia, Russia, and China, there’s nothing at all.

Think of it this way:  500,000 dead in Syria, forced starvation and mass torture in North Korea, systematic and lethal oppression in Iran, gender apartheid in Saudi Arabia, and an elementary lack of basic freedoms affecting over a billion in Russia and China.

But at the U.N. Human Rights Council, little democratic Israel is the problem.

U.N. Ambassador Nikki Haley rightly objected to a recent UN report charging Israel with “apartheid.” But the malicious slur of “apartheid Israel” is a staple of the Council’s fixed agenda, which dedicates time for hate-speech and incitement at every session, and transmits it around the world via a U.N. webcast.

Contrary to rule of law 101, the Council has an investigator on the Israeli-Palestinian conflict with a license only to report on Israel.

In the last six months alone, her twitter feed features: “God-chosen-Baby-burning #Israeli scum…” “Nazi Zionists force[s] shot a girl,” and a caricature of Satan beseeching Netanyahu for lessons on evil.

The “Human Rights” Council is now the principal U.N. engine of “BDS” – the campaign to boycott, divest and sanction Israel.  Economic strangulation is Plan B for Israel’s enemies, war and terrorism having so far failed to rid the world of a Jewish state.  The Council has sponsored the creation of a blacklist of companies around the world ‘directly or indirectly’ doing business with Israeli settlements – in effect, Israel period.

Obama’s council routine was to vacate the U.S. seat temporarily during the Israel-bashing agenda item, make a speech about “unacceptable” Israel-bias, vote against the anti-Israel resolutions, and then pay for their implementation in the name of some greater good. The Trump administration should not be working from the same playbook.

Make no mistake: there is no middle ground. Staying on the Council means American taxpayers will pay for the production of a blacklist of American companies doing business with Israel. The State Department representative told the Council Friday that it will not provide information for the blacklist. But, of course, the U.N. will simply get what it wants from the Palestinian entourage.

With predictable regularity, the subject of U.N. reform bubbles to the surface of this toxic environment. The ploy needs to be challenged head on.

The only body that can change the Human Rights Council is the one that created it – the General Assembly, where the U.S. has one vote and Islamic states have 56.

As Freedom House attests, less than half the members of the General Assembly are fully free democracies. The majority aren't going to create a club they can’t join.

It is understandable why Council members like Saudi Arabia, Qatar, Cuba and China want to masquerade as human rights authorities. But why would the United States want to legitimize this charade by standing beside them?

While America fiddles, the world’s rogues are reaching into your pockets in the name of their entitlements. This week the Council adopted resolutions inserting itself into “foreign investment,” “capital inflows,” “foreign trade,” and “financial markets,” while demanding more “technology transfer,” and a “development-oriented outcome of trade negotiations of the World Trade Organization.”

Sure, we voted against – and we lost. In fact, of the 15 resolutions this session adopted by vote, the United States lost 12 of them.  Setting ourselves up for target practice is not a foreign policy in which Americans can take pride.

Mr. President, the UN “Human Rights” Council, is not your place.