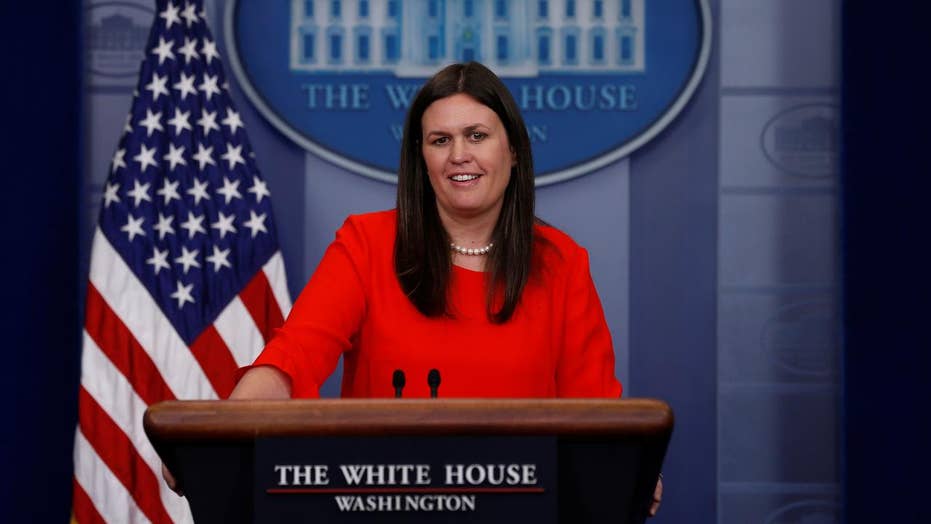 Sarah Huckabee Sanders’s appearance and demeanor is being ridiculed by some members of the media including a Daily Beast writer who called the new White House press secretary a “butch queen.” Is there a double standard when it comes to treatment of conservative women? Todd Starnes weighs in

Even the “Mean Girls” weren’t this mean.

Just moments after President Trump promoted Sarah Huckabee Sanders to the role of White House press secretary, she was attacked by a swarm of woman-hating liberals.

First, the propagandists at The New York Times and MSNBC questioned Sanders’ character and called her a liar, but now journalists are attacking her physical appearance.

Ira Madison, III, of The Daily Beast, likened Sanders to a drag queen in a hateful posting on Twitter.

“Butch queen first time in drags at ball,” he tweeted to his followers – along with a photograph of the press secretary.

Madison is the same “journalist” who cracked a racially-charged “joke” about Attorney General Jeff Sessions’ Asian-American granddaughter during his confirmation hearings. His tweet implied Sessions had borrowed her from a Toys-R-Us store so that he could use her as a political prop. Madison later apologized and deleted the tweet.

And he also penned a disgusting attack on Housing and Urban Development Secretary Ben Carson – wondering if his rule in the Trump White House was going to be “house or field.”

Hollywood was especially unkind to Sanders.

“I fetl like Sarah Huckabee Sanders left and right eye switched places or something,” comedian Akliah Hughes wrote on Twitter.

Could you imagine the hellfire and brimstone that would’ve rained down had a journalist or comedian made similar remarks about former first lady Michelle Obama?

The outrage over the attacks on Sanders has been limited to a few conservative publications and this column.

There has been no outcry from the feminist movement or female news commentators or enlightened liberals.

It’s as if the “Nasty Woman” crowd pulled their “p---y” hats over their eyes and ears – hoping to tune out the anti-woman hate spewing from the left.

The same thing happened when “Saturday Night Live” skewered her in a deplorable body-shaming sketch.

Meanwhile, the mainstream media spent the weekend attacking the newly-appointed White House communications director for what they perceived to be sexist comments directed at Sanders.

Critics pounced and accused Scaramucci of making comments regarding Sanders’ personal appearance. That was clearly not the case – but it did not seem to matter to the mainstream media.

And yet those same news outlets ignored The Daily Beast smear. It’s the kind of double standard conservative women have come to expect from the mainstream media.

Kellyanne Conway offered some sound advice to Sanders on Sunday – suggesting she ignore the “jackals and hyenas” attacking her.

“[The] irony of modern feminism is that they look right past sexist comments said about conservative women, definitely pro-life women like Sarah and me,” she told “Fox & Friends.”

Some might call Madison a thug or a bully or a small-handed guttersnipe who gets his jollies by smacking around women with cheap, misogynistic words.

And they would not be incorrect.

But if it’s all the same – I’ll just call him a sexist pig.