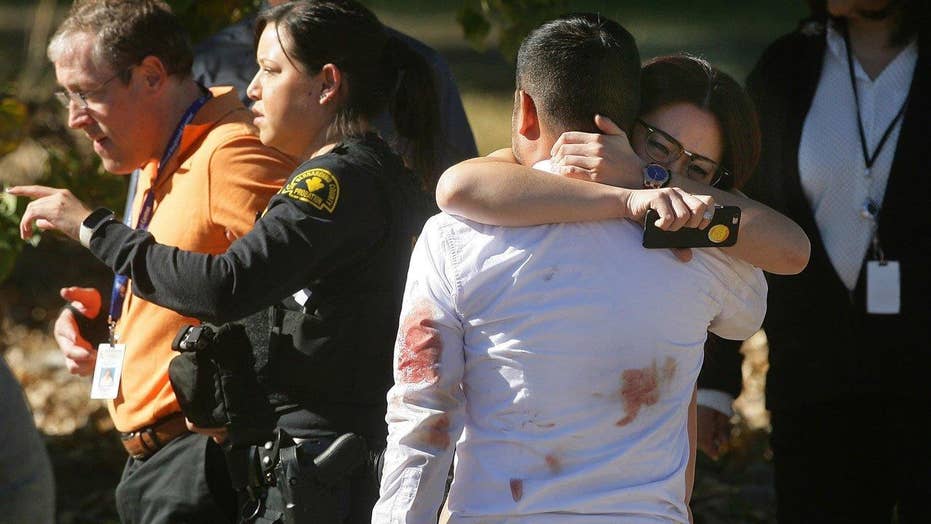 School for the blind shelters survivors of Calif. shooting

People who fled the scene described what they had seen; witness shares details on 'The Kelly File'

Gene Weingarten, a columnist for the Washington Post, took to Twitter after the California shootings began and wrote, “Dear ‘thoughts and prayers’ people: Please shut up and slink away.  You are the problem, and everyone knows it.”  Markos Moulitsas of the DailyKos blamed Republicans, tweeting, “Yo GOP, kinda hard to talk about ‘keeping people safe’ when your peeps are shooting up America.”

Islamic radicals, including a husband and wife, shot up a Christmas party.  On CNN, an analyst of some sort actually suggested that perhaps the Muslim man was upset that it was a holiday party.  The American political left has reached a point where everything is politicized.  Shows get awards based on how faithful they are to the LGBTQ community.  Bruce Jenner gets applauded as a hero for becoming a woman.  Christians get mocked for praying.  Republicans get attacked because Islamists shoot up a holiday party.

When shootings happen in America, conservatives immediately conclude it must be a mentally unstable person or an Islamic terrorist.  For the American political left, they always conclude it was a white, Christian, Republican.  It is the default of normal Americans to assume the best about their neighbor and fellow American.  It is the default of the political left to assume any bad act is the result of conservatives, including the awful tragedy in California.

The reason is because everything is political to the left and the ends justify the means.  The ends here are political solutions to evil.  Gun control will solve the problem, just as gun control prevented Islamic radicals from getting guns in Paris.  Oh … wait.  Americans who offer prayers can be ridiculed for relying on God because a reliance on God means these Americans are not relying on government, which is the ultimate endgame for the political left.  All of us are supposed to rely on government for our needs, not God.

When everything is politicized, every American not down with the struggle for a common leftwing agenda is a target for ridicule.

So anyone who prays is mocked and shamed. Concurrent to leftwing pundits mocking and shaming Americans for praying, out in California the victims and their families were praying yesterday and asking others for prayers.  Remember, according to Gene Weingarten at the Washington Post, those people praying “are the problem, and everyone knows it.”  What a contrast between those guerrilla keyboard brigade of the political left and those who faced actual evil.

When everything is politicized, every American not down with the struggle for a common leftwing agenda is a target for ridicule.  We have seen this before when something bad happens to conservatives and leftists openly ponder if they should feel bad.  A writer for the U.K’s Guardian yesterday, while events were still unfolding in California, openly wondered if it would be okay to assassinate members of the National Rifle Association’s board.  He compared doing that to killing Nazis.

We are in a brave new world.  God is not mocked without consequence, but the political elite of the American left have decided to do just that.  As scripture notes, “How they are destroyed in a moment, swept away utterly by terrors! Like a dream when one awakes, O Lord, when you rouse yourself, you despise them as phantoms.”