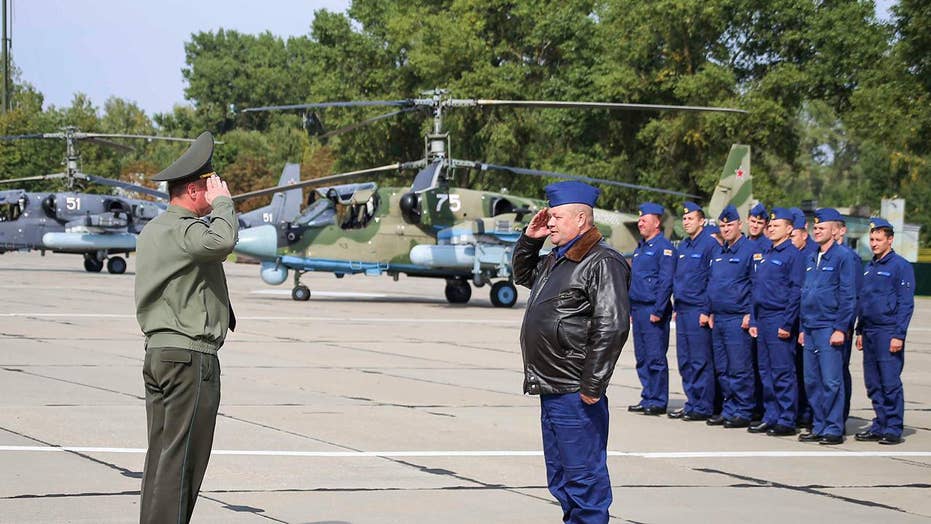 Is Russia preparing to invade another European country, or simply training its forces to do so in the future?

That’s the big question as Vladimir Putin launched a massive series of war games yesterday dangerously close to the borders of three NATO member states — Estonia, Latvia and Lithuania — as well as Ukraine.

The exercise — code-named “Zapad-2017” (Zapad in Russian means “West”) – is set to run through September 20th and tensions are spiking.

The Economist calls this “Russia’s biggest war game in Europe since the Cold War.” Moscow says only 12,500 troops will take part, most of which will operate in the country of Belarus, just south of the Baltics and just north of Ukraine. However, “some Western analysts, and Baltic State governments…have expressed concerns that the exercise will in reality be significantly larger, involving between 60,000 and 100,000 military personnel,” notes Janes Intelligence Review. “According to the Baltic States, the last Zapad-series exercise in 2013 involved 75,000 military personnel, six times higher than Russia disclosed.”

Estonia’s Defense Minister Margus Tsahkna says NATO has intelligence suggesting Moscow may leave Russian soldiers in Belarus once the exercises are over.

Have U.S. and other NATO commanders positioned enough forces of their own to protect the Baltic States against a Russian blitz? There is reason for concern.

“As currently postured, NATO cannot successfully defend the territory of its most exposed members,” concluded a recent RAND Corporation analysis, after a series of war games of their own. “Across multiple games using a wide range of expert participants in and out of uniform playing both sides, the longest it has taken Russian forces to reach the outskirts of the Estonian and/or Latvian capitals of Tallinn and Riga, respectively, is 60 hours. Such a rapid defeat would leave NATO with a limited number of options, all bad: a bloody counteroffensive, fraught with escalatory risk, to liberate the Baltics; to escalate itself, as it threatened to do to avert defeat during the Cold War; or to concede at least temporary defeat, with uncertain but predictably disastrous consequences for the Alliance and, not incidentally, the people of the Baltics.”

Estonia’s Defense Minister Margus Tsahkna says NATO has intelligence suggesting Moscow may leave Russian soldiers in Belarus once the exercises are over. Reuters cites Tshakna as saying Russia will use 4,000 railway carriages to transport its troops and equipment to Belarus, perhaps to establish a new Russia military base.

“For Russian troops going to Belarus, it is a one-way ticket,” he told Reuters.

Ukrainian President Petro Poroshenko, meanwhile, says Putin is using the exercise as “preparations for an offensive war on a continental scale.”Poroshenko told the BBC he also cannot rule out the possibility that the drill “may be used as a smokescreen to create new Russian army assault groups to invade Ukrainian territory.”

Are such concerns overblown? Maybe not. In the last decade, Putin has invaded Georgia (and currently occupies 20 percent of it). He has invaded Ukraine – twice (and has annexed Crimea and now occupies Eastern Ukraine). He has sent Russian forces into Syria (in alliance with Iran) to prop up the regime of Bashar al Assad that has slaughtered hundreds of thousands of its own people.

Meanwhile, in Putin’s Russia people who oppose him, or expose him – journalists, human rights activists, businessmen, and ordinary citizens – continue to be arrested, murdered or simply disappear.

This is of personal concern to me. My paternal grandparents and great-grandparents were Orthodox Jews who escaped out of Russia in the early years of the 20th century as the Czar was fomenting horrific pogroms against the Jews. Now I see Putin fashioning himself as a 21st century Czar.

I’m not the only one. In an exclusive poll I commissioned in January by McLaughlin & Associates, we found that sixty percent of Americans agreed with the following statement: “Mr. Putin worries me. Like Russian Czars of the past, he wants to regain the glory of Mother Russia by expanding the territory and influence of Russia in Europe and the Middle East, including by military force. Unlike the Czars of the past, he possesses a nuclear arsenal. If Mr. Putin is not contained by a new and very firm American and NATO policy of ‘peace through strength,’ I am worried he will continue to bully, blackmail and invade more countries and pose a far greater danger to America and our allies.”

Indeed, fully 71 percent of Americans polled said they believed “Vladimir Putin and the government of Russia pose a clear and present danger to the national security of the United States, our NATO allies in Europe, and our Mideast allies, such as Israel.”

Americans may be distracted right now by hurricanes and raging fires. But their instincts are spot on. Washington had better stop playing partisan politics and get focused in a bipartisan way on the growing threat Putin poses, for it’s real, and it’s growing.