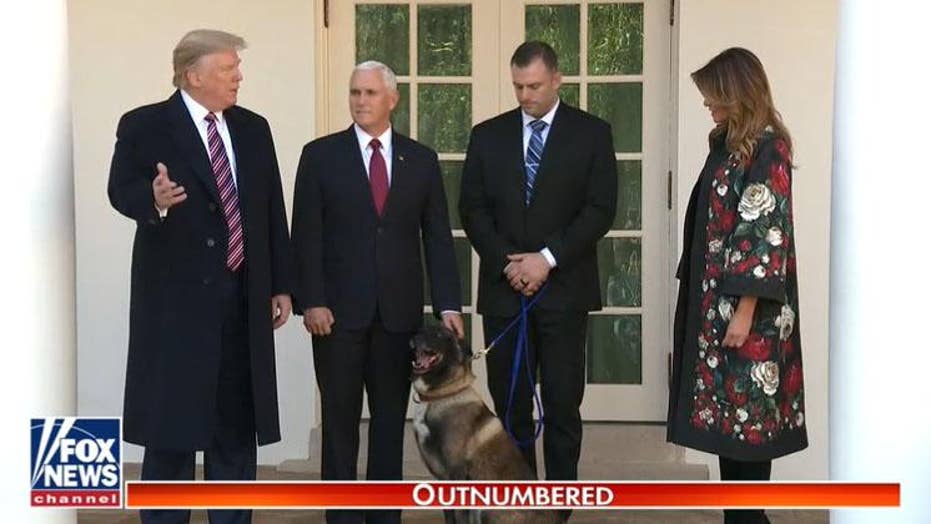 Members of the U.S. military deserve our gratitude and appreciation, and have earned the right to medical care following their retirement – including service members who have four legs and a tail.

President Trump honored one of our K-9 military heroes Monday at the White House. The president welcomed Conan, a Belgian Malinois who was injured in October when he chased ISIS leader Abu Bakr al-Baghdadi into a tunnel in Syria and Baghdadi killed himself and two of his children by detonating his suicide vest.

The president presented a certificate and an award to Conan, who has recovered from his injuries. Trump said: “The dog is incredible … so brilliant – so smart … Conan did a fantastic job. We’re very honored to have Conan here.”

Of course, most military working dogs don’t meet the president of the United States – but all play a vital role in helping our men and women in uniform defend our nation and themselves.

These dogs sniff our explosive devices better than any human or machine can. They are partners on the battlefield, in law enforcement offices across the country, and in the homes of their handlers.

Working dogs put their lives on the line to keep Americans safe – whether they assist law enforcement or our armed forces. When they retire, they deserve the proper, fully funded medical care that befits their years of service and sacrifice.

Currently, these dogs become the sole responsibility of their new handlers or owners when they retire. The federal government has no dedicated financial support for their medical care.

There are roughly 1,800 military working dogs in active service. Every year about 400 are adopted after retiring.

Despite participating in over 100 patrols in Iraq and Afghanistan, clearing routes for his fellow Marines and saving uncounted lives, Sgt. Yeager's medical bills fell on the family that adopted him.

Sgt. Yeager's story is a testament to the work of K-9 heroes, which is why American Humane honored him as our 2019 Military Hero Dog. Since retiring, he has become an ambassador for Project K-9 Hero Foundation, an organization that pays for 100 percent of the medical bills arising from his injuries.

Across the country, handlers of retired working dogs like Sgt. Yeager have found themselves responsible for medical bills that can cost thousands of dollars annually.

But we need more robust support. The financial barrier to care for retired K-9 heroes could dissuade loving families from adopting them. And providing needed medical care is the least we can do for dogs who worked tirelessly to keep Americans safe.

We already take care of human veterans – the federal government spent more than $70 billion last year on their care. We should be investing more in their care and treatment, but also increasing funding for four-legged heroes.

The K-9 Hero Act allocates $5 million a year for these hero dogs – a tiny amount considering the size of the federal budget.

The federal government spends $1.7 billion every year maintaining empty and unused buildings. And printing the Federal Register daily, a document that ends up in trash bins, costs taxpayers $1 million annually.

And believe it or not, between 2010 and 2014 the National Institutes of Health allocated nearly $875,000 to study the effects of cocaine use in Japanese quail. Specifically, researchers wanted to know how the drug would affect their sexual behavior.

After spending nearly $875,000 on cocaine for birds, surely we can find some money for retired K-9s.

American Humane supports the K-9 Hero Act. As the country's first national animal welfare nonprofit, we believe America has an obligation to care for the dogs who keep us safe.

We have worked to support military animals for over 100 years. We encourage everyone who supports this legislation to contact your representatives in Washington and let them know why they should co-sponsor and support the K-9 Hero Act.

These dogs are genuine heroes. Let's finally treat them that way.

Dr. Robin Ganzert is president and CEO of American Humane, the country’s first national humane organization, which has been working to support the U.S. military and military animals for more than 100 years.