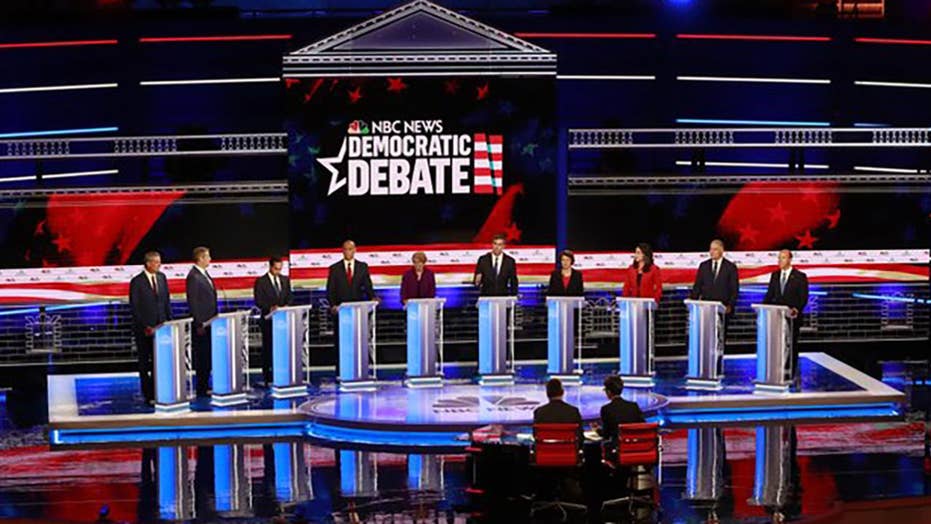 How did voters react to the first night of Democratic presidential debates?

If the first Democratic debate of the 2020 election revealed anything, it’s just how large the gap has grown between the Democrats’ “progressive” base and the American public.

Here are just a few of the issues in which the candidates are wildly out of step with average Americans:

Mass Immigration. According to the May 2019 poll from Gallup, immigration is now viewed as the second most important concern (19 percent) among all voters, after the loss of faith in government leaders (23 percent). In comparison, gay and lesbian rights, “the situation with Russia” and school shootings are mentioned by less than 1 percent.

While the official number of illegal immigrants in the U.S. has declined slightly over the past 12 years – from 12.2 million in 2007 to 10.7 million in 2016 – the total number of all immigrants arriving annually, legal and illegal, has actually increased 70 percent just since 2011.

This is an inconvenient truth for the 2020 Democrats – all of whom are opposed to President Trump’s plan for increased border security and in favor of increased immigration, not less.

Late-term Abortion There is no issue that divides Americans more than legalized abortion.

Yet at least when it comes to third-trimester abortions, the Democratic candidates’ positions are way out of step with those of the general public.

Fully 64 percent support laws banning “partial-birth abortion” in the second and third trimesters except to save the mother’s life.

Yet almost all of the leading Democratic candidates for president actively seem to almost celebrate abortion on demand up to the moment of birth, even opposing laws that would require doctors to care for (that is, not deliberately kill) the children who miraculously survive such abortions.

Among the Democratic senators running for president, three – Kamala Harris, Kirsten Gillibrand, and Elizabeth Warren – cosponsored a Senate bill that would override all state restrictions on third-trimester abortions.

And even though 55 percent of Americans support so-called “heartbeat bills” that would restrict abortion after a fetal heartbeat can be detected at six to eight weeks, New York Mayor Bill De Blasio has called these laws “vile.”

Health care. Nowhere is the socialist wing of the Democrat Party more in evidence than on health care.

“Private insurance is not working for tens of millions of Americans when you talk about the co-pays, the premiums, the out of pocket expenses,” de Blasio blustered during last night’s debate. “It’s not working.”

Perhaps not, but a 2018 Gallup poll revealed that only 4 out of 10 Americans favor a government-run health care system with 54 percent still preferring private insurance.

Most of the Democratic candidates support similar proposals – although not all are willing to embrace the so-called Green New Deal proposed by Rep. Alexandria Ocasio-Cortez, D-N.Y., and supported by Kirsten Gillibrand, Kamala Harris, O’Rourke and Sanders.

The problem for the Democrats is that, while Americans support green energy in principle, fewer than half (45 percent) think global warming will pose a serious threat in their lifetimes.

Americans are willing to do their part, but view the radical proposals of the Democrats as unrealistic.

Free speech. The last issue that divides the 2020 Democrats from the American public is free speech.

Americans are for it, the Democrats hate it.

Kamala Harris has repeatedly threatened social media companies with legal penalties if they allow “hate speech” on their platforms.

Socialist Bernie Sanders agrees. “Bernie believes we should not depend on a handful of large corporations to stop the spread of hate in America,” a Sanders spokesman told Buzz Feed News. “We must regulate these platforms to ensure the safety and security of the American people.”

The problem lies in the definition of “hate speech.”

The tech conglomerates have been repeatedly caught censoring conservative and religious viewpoints with which they disagree – such as advertisements for pro-life films like "Unplanned."

The Democrat candidates want more of this kind of censorship, but the public strongly disagrees.

A Rasmussen Reports survey found an overwhelming 85 percent of American adults believe the right to free speech is more important than making sure no one is offended by what others say. Seventy-three percent agree with Voltaire when he said, “I disapprove of what you say but will defend to the death your right to say it.”

Robert J. Hutchinson is the author of many works of popular history, including, most recently, "What Really Happened:  The Lincoln Assassination (2020)."