In response to Iran’s increasingly bellicose foreign policy, which extends from military operations in Iraq and Afghanistan to civil war in Yemen, terrorist attacks on regional American allies to supporting Hamas in dropping 600 rockets on Israel this week, the Trump administration has squeezed the Iranian economy.

Team Trump first exited Obama-Biden-Kerry’s stillborn nuclear deal, which gave the West a deadened, one-sided, unenforceable promise to end nuclear research – which Iran did not do – in exchange for planeloads of cash. That was a year ago.

In a confirmation of Iranian bad faith, Islamic leaders went full throttle testing long-range missiles, which could one day carry nuclear warheads. In response to Iran’s regional belligerence and overt support of anti-Western terrorism, Trump began ratcheting up sanctions.

IRANIAN THREAT THAT PROMPTED DEPLOYMENT OF US CARRIER, BOMBERS TO MIDDLE EAST ‘IS REAL’, OFFICIAL WARNS

When Iran’s hegemonic power projection, terrorist support, and aggressive military actions across the region did not decline, Trump named the Iranian Revolutionary Guard (IRG) a “Foreign Terrorist Organization” (FTO) under U.S. law. This was a first. It officially called Iran out as a terrorist nation.

That action, which could be paired in the future with naming Iranian-supported Hamas and Hezbollah drug kingpin organizations, makes clear that Iran not only disavows international law but actively works to undermine, circumvent and flout it. That was last month.

Most recently, the administration ended friendly waivers to allied nations, which had offered these nations temporary relief from sanctions on those who bought Iranian oil. The goal, successful to date, was to isolate Iran and impinge on that oil-dependent regime’s spending power – to trigger other actions. 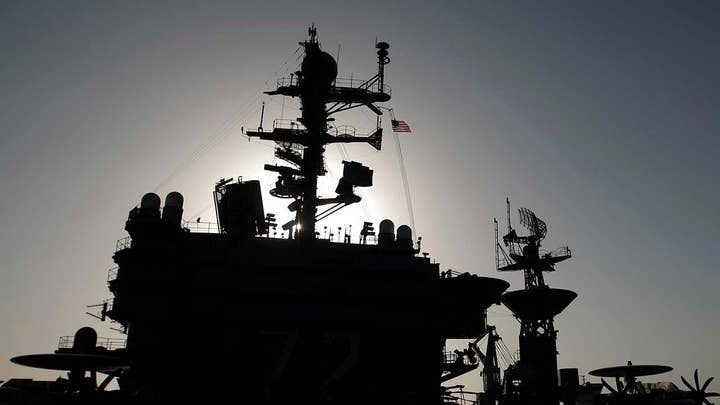 What other actions? The endgame is probably multi-pronged. Although anyone’s guess, primary objectives are probably causing Iran to retreat from a regionally destabilizing foreign policy, ending aggression in Syria –which has  included attacks on Israel, stopping Iranian-supported Shite militia destabilization of Iraq, drawing back from civil war in Yemen – which threatens Saudi Arabia, and getting Iran to rethink unbridled support for state-sponsored terrorism – including Hamas attacks on Israel.

The Islamic dictatorship’s response to these actions has not been promising. In addition to supporting Hamas rocket and terror attacks on Israel, they have apparently – details remain sketchy – been planning major terrorist initiatives, either by IRG or a terrorist surrogate, on U.S. troops in the region and U.S. allies.

To make clear that this would be a major mistake by Iran, the president ordered America’s USS Abraham Lincoln Carrier Battle Group directly to the Persian Gulf on Monday. The goal is deterrence not engagement, but a battle group is loaded to the gills.  It is built for surgical and also sustained engagement.

So, what happens next? The answer is – something far more important than gripes about Mueller report redactions, holding a judicious cabinet member in “contempt” for protecting grand jury material, or screaming again about impeachment for made-up offenses.

What happens next in the Middle East is important, strategically and to the world. An American president is saying – no more bullying those trying to end civil wars, create and sustain democracies, preserve human liberty and protect regional stability. No more free ride for supporting terrorist organizations, or incubating, funding a state-led terrorist group.

The Trump administration has said clearly – if Iran attacks Americans or our allies in the region, expect proportionate military reappraisals. No location is any longer out of bounds. If Iran persists in this pernicious and destabilizing behavior, expect a persistent U.S. and allied response.

Finally, there is a longer-term message being sent. It is two-fold. It is this: America will no longer allow any region of the world – or any of our allies – to be terrorized without a decisive response. We will deter, seeking peace through strength, as Thomas Jefferson, Theodore Roosevelt, Ronald Reagan and two Bushes did in the same region. But we will respond – with force – if needed. Second, and more simply, the Iranian people deserve better.