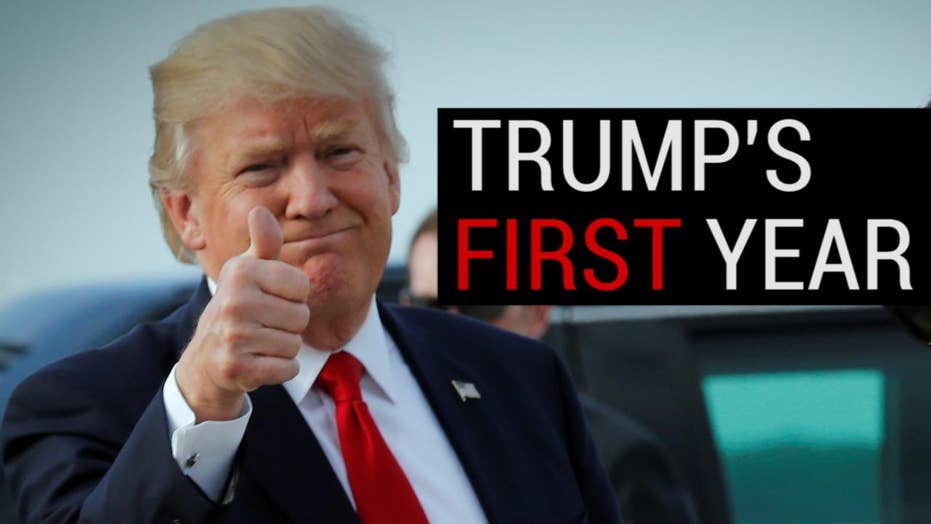 From tax reform to military successes, here’s a look at President Trump’s achievements one year since taking office.

Since President Trump was elected, Democrats have done nothing but reject, obstruct and resist – kicking and screaming every step of the way. Yet that has not deterred our president. In fact, he has kept his eye on the prize: prioritizing the very people who put him in office. Because of that, he has had a historically successful first year in office.

President Trump just delivered the biggest set of tax cuts in over 30 years, after rallying Congress and the American people around a plan that puts more money into our pockets. He has cut 10 regulations for each new one added, saving the country billions of dollars.

The American economy is great again. The unemployment rate is down to a 17-year low of 4.1 percent and the labor market has exceeded expectations by adding hundreds of thousands of new jobs. The gross domestic product is rising beyond expectations, consumer confidence is at a 17-year high, small businesses are growing and the stock market is soaring.

The president was quick to nominate federal judges during his first year, with 19 confirmed by the Senate so far. He’s had the most circuit court judges confirmed during a president’s first year, and appointed widely respected Justice Neil Gorsuch to the Supreme Court soon after taking office.

As we reflect on President Trump’s first year, let this be a reminder that the Democrats who claim to care about us are actually working against us.

He’s boosting pay for our troops, growing our military, and giving them the equipment they need to remain the world’s top fighting force. He’s restoring accountability to the Department of Veterans Affairs, because he knows our nation’s heroes deserve much better than they’ve been getting.

The president boldly stood for American leadership during a historic United Nations address, where he outlined a forceful new strategy toward nations that pose the greatest security threats to the United States. He was clear and unapologetic about our nation’s new policy: America First.

President Trump has made the southern border harder to illegally cross – arrests of people trying to cross illegally into the United States from Mexico are at the lowest point since 1971. His vision for merit-based immigration is one that will reward those who follow our laws, make our country better and are proud to call themselves Americans.

The administration is also working to eradicate the most violent street gangs from our nation, and is tackling our nation’s drug addiction and opioid abuse crisis. He’s stayed true to the commitments he made on the campaign trail, after taking office, and again during his joint address to Congress earlier this year. The president has done all of this and more, without taking a salary. He promised he’d donate it, so that’s what he’s done.

Since the president’s inauguration, Democrats have delayed confirmation for his national security nominees and stalled hundreds of other nominees, all to undermine his first year in office. They launched the first partisan filibuster of a Supreme Court nominee in history, for no real reason.

As we reflect on President Trump’s first year, let this be a reminder that the Democrats who claim to care about us are actually working against us. They push fraudulent narratives to hide President Trump’s real action for the American people. They’ve pledged a reckless resistance, whereas President Trump pledges results. Despite their obstruction, the president continues to lead – so here’s to one year down, and many more to go.