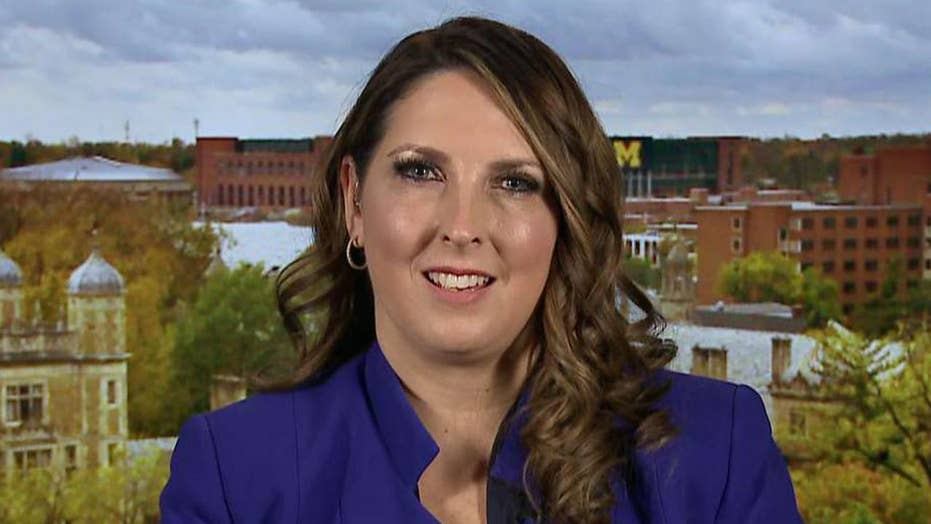 RNC chairwoman on what she looks for in a House speaker

On 'America's Newsroom,' Ronna McDaniel addresses the influence of suburban voters and looks ahead to taking back the House in 2020.

The Republican Party faced historic odds ahead of the 2018 midterm elections. Since the 1920s, the party in control of the White House has lost seats in both the House and Senate during the president’s first term. Pundits and politicos fixated on this trend, claiming for months that a blue wave would descend across our nation, bringing massive Democrat victories during midterms.

But Tuesday’s results proved otherwise. We staved off a blue wave thanks to the Republican National Committee’s (RNC) largest-ever ground game and record-setting fundraising, and President Trump’s energizing rallies for our candidates.

This week Republicans gained seats in the Senate – a historic achievement that has only happened four times. Our minimal losses were in spite of the retirement of 43 House Republicans, the most for our Party since 1930. Democrats, meanwhile, had very few retirements and their candidates had a significant cash advantage, out-raising Republican incumbents in 92 districts.

Despite the odds, the Democratic Party’s so-called tsunami hit a Republican wall and became nothing more than a ripple. Our success was thanks to grassroots enthusiasm for President Trump and his agenda, our Party’s far-reaching ground game, comprehensive get-out-the-vote operation, and record-breaking fundraising haul. This week, the American people sent a clear message to Washington: Stop obstructing the America First agenda, or go home.

With our permanent infrastructure and strong team in place, Republicans are ready to do it all over again and keep President Trump in the White House in 2020.

The RNC had its largest-ever mobilization ahead of the midterms to ensure victory. We outpaced the DNC at every turn, raising a non-presidential year record-breaking $270 million. Our unprecedented fundraising allowed us to invest a record $275 million into this election cycle, making it our most expansive data and ground game investment in history.

We had more than 550 staffers working on the ground across 29 states. We trained more than 25,000 Republican Leadership Initiative fellows, our Party’s most active volunteers in the field. We recruited more than 200,000 volunteers in communities across the country.

Our team’s dedication and hard work enabled us to spread our Party’s message of opportunity through 2.6 billion voter contacts, including over 79 million traditional volunteer contacts through door-knocking and phone calls in every corner of the country.

With our permanent infrastructure and strong team in place, we are ready to do it all over again and keep President Trump in the White House in 2020.

Now that we have defended and increased our Senate majority, Republicans will continue to fight for President Trump’s agenda and deliver more wins for the American people.

The administration has done so much to lift up American workers and families, with policies that have created millions of new jobs, cut taxes, and grown our economy. We are in a strong position to continue those gains, protect our communities, and confirm the president’s qualified judicial and executive branch nominees.

Americans made their voices heard on November 6. They told us that they demand results and will hold their elected officials accountable.

Now, it is time for Democrats to turn away from obstruction and resistance and instead work with Republicans on behalf of their constituents and our country.