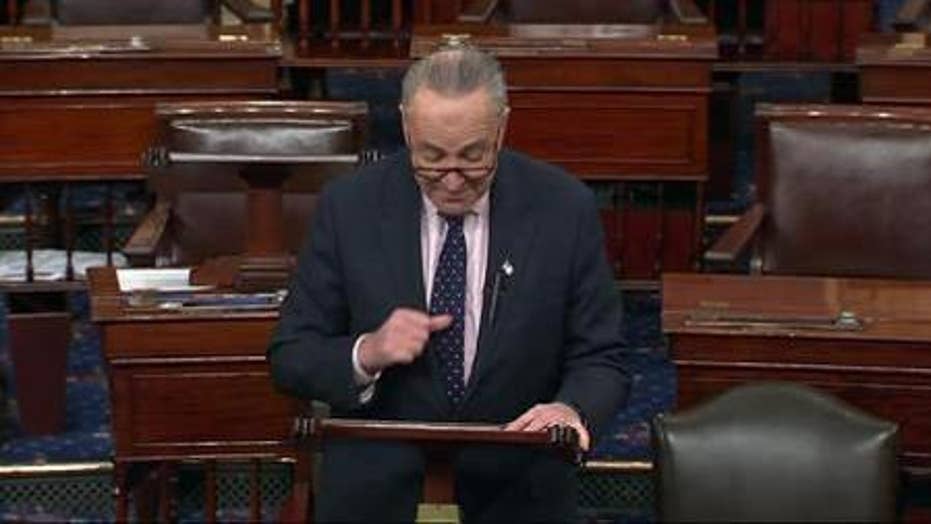 Sen. Schumer: President Trump, you will not get your border wall

On the campaign trail, presidential candidate Donald Trump ran on the promise that he would fight for border security to keep the American people safe. Now, hours away from triggering another government shutdown, Democrats have once again dug in their heels to work against border security and the interests of Americans.

Senate Democratic Leader Chuck Schumer of New York and his colleagues are threatening to hold government funding hostage – all because they would rather fight for open borders than the safety of our own communities.

As Republicans work toward an agreement on a government funding bill to prevent a shutdown, the president has made clear he will only sign legislation that provides the resources needed to strengthen our borders.

House Republicans came up with a solution and passed a short-term spending bill Thursday that included $5.7 billion for border security.

All eyes are now on the Senate – but Senate Democrats still refuse to work with Republicans to fund a wall or slat barrier for the border, even though many of these same Democrats once supported similar measures.

In 2006, 26 Democrats voted for a bill that directed the building and maintenance of 700 miles of border fencing. Among those Democrats who supported the bill were Schumer, Sen. Dianne Feinstein of California and then-Sen. Barack Obama of Illinois.

In 2013, all 54 Democrats voted to pass legislation to build a physical barrier on the border at a much greater cost than the $5 billion President Trump is now requesting. The bill provided $46 billion for border security improvements and added 700 miles of border fencing. Schumer and Feinstein were again among the Democrats who voted for it.

Schumer said it best that same year: “If you’re going to get bipartisan support and get (an immigration) bill done, you’re going to have to do something on the border.” Back then, he acknowledged what we all know: strong borders are essential for our nation’s security.

Due to years of unchecked illegal immigration, drugs and crime continue to flow into the United States and undermine the rule of law.

According to the Department of Homeland Security, the U.S. Border Patrol seized over 6,400 pounds of cocaine, over 430,000 pounds of marijuana, and over 10,000 pounds of methamphetamine from illegal border crossers – just between last October and this August.

But President Trump’s approach to border security has already yielded results. In the areas where we have improved or expanded physical barriers – El Paso, Texas; Yuma and Tucson, Ariz.; and San Diego, Calif. – illegal border crossings have dropped by at least 90 percent.

Clearly, border walls work. Given the choice between another unnecessary shutdown and border security funding to maintain this progress, Democrats should stand for the interests of the people they represent.

Americans have had enough of the inaction from Congress. We do not want another Schumer shutdown. We want an end to the partisan games and empty obstruction that hurt our communities.

We want Democrats to work with Republicans and put the safety of Americans first. We want border security and a funded government. Senate Democrats must now choose wisely. The security of our nation depends on it.