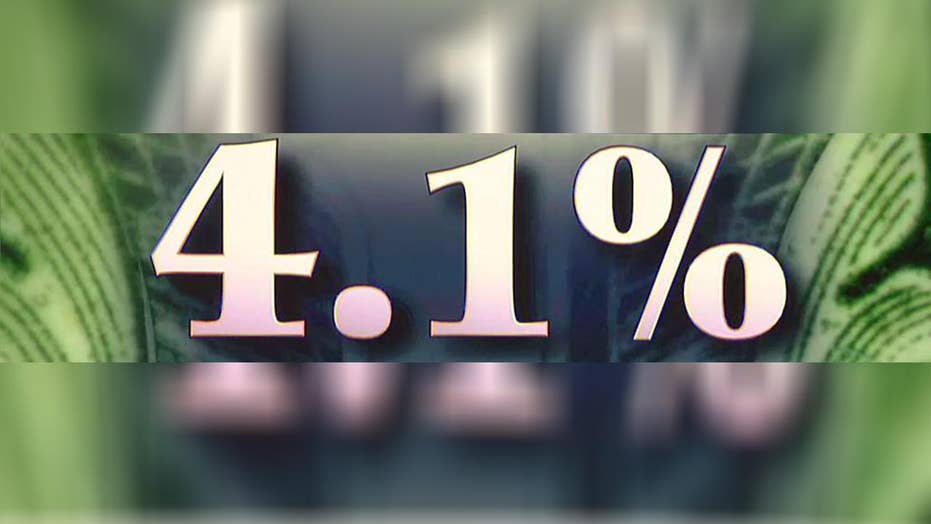 The announcement Friday that America’s gross domestic product (GDP) grew at an annualized rate of 4.1 percent in the second quarter of this year was immediately seized on by President Trump to promote the benefits of the tax cuts he signed into law and his other economic policies.

But despite the good news now, the U.S. economy is unlikely to look so good on Election Day on Nov. 6 – and that could spell trouble for Republicans.

President Trump and congressional Republicans are counting on a strong economy to help them hold onto their majorities in the U.S. House and Senate in the midterm elections, when the party in the White House typically loses seats.

"These numbers are very sustainable,” the president said, sounding an optimistic note. “This isn't a one-time shot. ... Next quarter, I think it's going to be outstanding.”

The growth in GDP in the second quarter was nearly double the previous quarter’s growth and the strongest level in four years. But the strong numbers are marginally lower than many anticipated.

Economists surveyed by Bloomberg were expecting 4.2 percent growth. The Wall Street Journal had predicted a rate of growth as high as 4.5 percent. And President Trump suggested earlier the growth of GDP could hit 4.8 percent.

In the game of expectations, any underperformance could spell disaster for Republican chances to hold their congressional majorities in November.

Importantly, the Congressional Budget Office and Federal Reserve both say they expect the strong second quarter growth will not last. They believe the economy will stagnate in the coming years.

This is because the growth we saw in the second quarter was powered by one-time factors that will not occur again.

The first argument that growth is unsustainable is the disproportionate amount of exports the U.S. had in the second quarter. Companies abroad were buying U.S. products as fast they could in an attempt to avoid being hit by retaliatory tariffs foreign nations imposed on America after President Trump slapped tariffs on foreign steel and aluminum, along with products from China.

President Trump has also threatened to impose more tariffs on more products imported into the U.S., leading to fears that a full-scale global trade war will pit America against nations around the world.

The increase in U.S. exports unquestionably raised the GDP in the second quarter – but because the increase was temporary, its benefits will not last.

In fact, the second quarter increase in exports is actually a red flag warning of trouble ahead. After purchasing so much from the U.S. in the second quarter, foreign nations will be importing less in the current quarter because they will be using up what they have already bought and stockpiled.

Another reason that our GDP growth is unsustainable is that the increase in consumer spending in the second quarter won’t last.

According to Robert Murphy, an associate professor of economics at Boston College: "You can pump up demand in the short term – that's what a tax cut does. But you can't sustain it because you're not going to have the resources to keep pushing at that rate."

Essentially, a tax cut makes people feel temporarily wealthier, so they spend more when they see they are paying less in taxes. But this instant affluence fades as people develop a more conscientious grasp on their income and eventually spending decreases, returning to a normal pattern.

These factors all spell trouble for the economy and Republicans as we approach the midterm elections.

In June I argued that if the Republicans are to hold onto control of the Senate and House in November they must convince voters the GOP will do a better job managing the nation’s economy. But if economic growth is not sustained and wages remain stagnant, Republicans will have a hard time running on an economic platform.

An increase of 4.1 percent in GDP is surely something to be proud of, but if this growth slows, President Trump will not be able to validate his immense tax cuts and increasing deficit spending.

In fact, the third quarter’s growth percentage will be released at the end of October – just a week before the midterm elections take place. If the increase in GDP is much lower than expected, Republicans run the risk of losing key voters who were promised a consistently strong and expanding economy due to the tax cuts supported by Republicans and opposed by congressional Democrats.

And you can be sure that Democrats will remind voters that the tax cuts will push up America’s budget deficit to an estimated $804 billion this year. Even after economic factors are considered, the deficit will balloon well past $1 trillion and continue growing at an alarming rate in the years ahead. This will force the federal government to spend billions of dollars more just to pay interest on the ballooning national debt.

If wages do not rise and hardworking Americans fail to see continuous and tangible positive economic impacts, they will certainly have something to say come November – and what they say at the ballot box will not be good news for President Trump and Republicans.