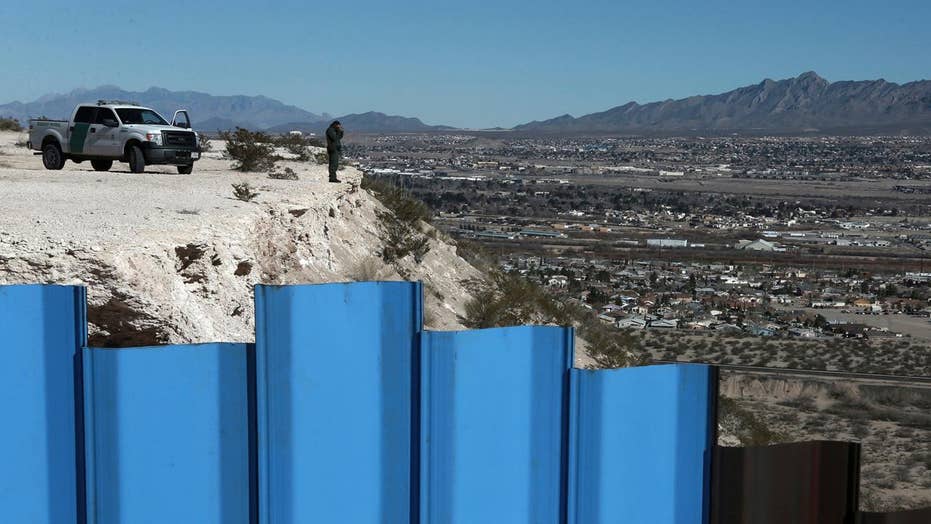 President concerned about bags of drugs being tossed over the wall

Over the last six months the Trump administration has made good on its promise to enhance border security and enforce our immigration laws.  In the first half of 2017, illegal border crossings fell by an estimated 70 percent. It is very reassuring to know that President Obama’s reckless immigration policies are now over.  An Executive Branch that is dedicated to fixing the problems along our southern border and actually enforcing our laws not only deters future illegal immigration, but is also absolutely necessary to protecting our homeland.

However, we are constantly reminded that our borders and our immigration laws are still being exploited, including by those who are intent on doing Americans harm.  For example, MS-13, a violent transnational gang controlled by members in El Salvador, has aggressively recruited minors who entered illegally at our southern border during recent surges of illegal immigration.  Known for its brutal tactics of rape, theft, and homicide, this gang now has tens of thousands of members in cities all across the United States.

These dangers are not always brought on by transnational gangs however. In late July, a 65-year-old woman from Portland, Oregon, was assaulted by an illegal immigrant armed with a knife. The assailant had been previously deported over a dozen times. How did this man keep sneaking into our country and why are some localities undermining the enforcement of our immigration laws and their communities’ safety?

Further, nine illegal immigrants were recently found dead in a sweltering tractor-trailer parked outside of a Walmart in Texas. Tragically, dozens more were sent to a nearby hospital; some with life-threating conditions.  They were the victims of a heinous human smuggling operation.

We cannot be a safe nation if we have porous borders and our laws are not being fully enforced.

Violent criminals, traffickers, drug smugglers, and international terrorists continue to do everything they can to break into America, creep into our neighborhoods, and take advantage of our society. This is completely unacceptable. We cannot be a safe nation if we have porous borders and our laws are not being fully enforced. We must tackle these problems head on.

Fortunately, we have introduced two important pieces of legislation in the House of Representatives that work together as a united front to strengthen our border security, strengthen the enforcement of our immigration laws, and provide the Department of Homeland Security with the personnel and resources it needs to get the job done.

The Judiciary Committee has passed Representative Raùl Labrador’s, R-Idaho, Davis-Oliver Act, named for two law enforcement officers from California who were killed by an illegal immigrant. This legislation removes the ability of any future president to unilaterally shut down immigration enforcement by empowering state and local authorities to help enforce our immigration laws. State and local authorities are the front line in the fight against crime and encounter criminals every day in their communities.  We must ensure that they are able to identify the drug dealers, murderers, drunk drivers, and spouse-abusers who are illegally present and work with federal immigration enforcement authorities to ensure their punishment and removal.

The legislation also withholds certain federal grants from jurisdictions that illegally prohibit their officers from cooperating with ICE; allows victims of crimes by illegal aliens to sue localities in instances where the locality’s refusal to cooperate with ICE facilitated the crime; makes membership in a gang a deportable offense; and calls for additional ICE officers to enforce our laws; among other important provisions. This legislation is a necessary step towards keeping our communities safe.

The Homeland Security Committee’s Border Security for America Act is a multi-layered approach that enhances the security of our southern border in a number of important ways.

Most notably, this bill authorizes the construction of a border wall and provides $15 billion for the deployment of tactical infrastructure, technology, and other measures to achieve full operational control and situational awareness. President Trump repeatedly said that a wall was an important part of securing our border and this legislation will help make that happen. However, a wall will not solve this problem by itself.

This legislation improves and modernizes ports of entry to target illegal immigration while enhancing trade, authorizes the National Guard to assist with aviation intelligence support, and will ensure identification of visa overstays by requiring implementation of the Entry-Exit system Congress enacted over two decades ago to track the entry and exit of foreign nationals visiting our country. It also provides more boots on the ground by adding 5,000 Border Patrol Agents and 5,000 Customs and Border Protection Officers. We can have strong walls, solid intelligence, and advanced technology, but our strongest asset in the fight to control our borders are the brave men and women who patrol our borders.

The American people have made it clear that they want to see their leaders implement policies that will protect their families and their neighborhoods. A weak border and immigration laws that can be easily circumvented only allow new dangers to enter our country and threaten our citizens.  Let’s work together and pass these common sense proposals that will better enforce our nation’s immigration laws and provide all Americans the secure border they have long demanded and deserve.

Rep. Michael McCaul is a Republican who represents Texas's 10th congressional district and is the ranking Republican member on the House Foreign Affairs Committee.