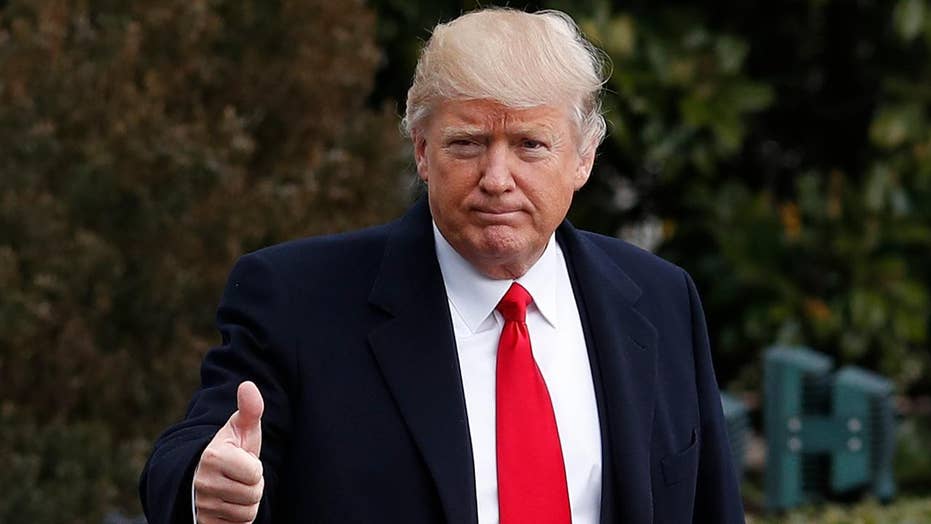 Where the Trump administration stands on health care

The president admits to ObamaCare replacement delay; James Rosen has the latest for 'Special Report'

Many Americans well remember that promise made by President Barack Obama. Many Americans also know that pledge turned out to be a broken promise. Not only did millions find themselves looking for new coverage after their pre-ObamaCare plan was canceled, each year since more Missourians have been forced to search for a new insurer as providers have left the marketplaces.

We were also told health care prices would come down under ObamaCare – $2,500 a year for a typical family. Instead, we have seen premiums skyrocket across the country, by double digits in many states, and outrageous deductibles most families simply can’t afford. A small business owner from Pleasant Hill, in Cass County, is facing premiums for her family totaling $1,463.36 per month in 2017. That is $17,556 per year and more than one-third of the family’s projected income. Compare that with their $624.21 per month premium in 2008, or 10 percent of the family’s income. Again, the claim that ObamaCare is affordable is not supported by the facts.

Further, we heard ObamaCare “means more choice, more competition, lower costs for millions of Americans.” Another broken promise. Insurers have left the marketplace each year since ObamaCare was put into effect, leaving a third of the country, including 96 of Missouri’s 114 counties, with only one provider to ‘choose’ from. So much for choice.

The fact is, while we may have seen more Americans buy health insurance, exploding deductibles have left many middle- and low-income families unable to use this coverage due to drastically increased out-of-pocket costs. Far too many Missourians can’t afford it and 80 percent of Americans want some sort of major change to the law. ObamaCare has charted an unsustainable spending path, leaving hardworking families with fewer options or control of their health care than ever before.

ObamaCare has failed. How do we fix it?

At its core, ObamaCare does nothing to address the true problems that have caused costs to soar. This is evidenced by the fact that costs have continued to rise under ObamaCare, even after forcing people to buy coverage they don’t want or need to cover the costs of those who need and want it.

The people have made it clear they do not want a return to the pre-ObamaCare status quo. Congressional Republicans agree. We are working to repair our broken health care system with patient-centered solutions that give Americans more choices and lower costs. Instead of forcing people to buy health insurance they cannot afford with provisions they do not need, we believe it is our job to create an atmosphere in which people can buy health insurance that meets their needs at a price they can afford from the provider of their choice.

Despite all the rhetoric and fear mongering from opponents of our plans, it must be noted that, as we work to bring relief to the scores of families who are being hurt by ObamaCare, we understand it needs to be done in a thoughtful and deliberate manner.

For the Americans who have found coverage for the first time under ObamaCare, there will be a stable transition period and coverage will not be instantaneously dropped or denied while a replacement is being implemented. Furthermore, our plan includes those ideas that worked and provide real protections and peace of mind to Missourians -- regardless of age, income, medical conditions, or circumstances -- while giving patients the right tools, like Health Savings Accounts, to make health insurance more portable and affordable.

We want every American to have access to affordable, quality health insurance that meets their needs. A government mandate such as that under ObamaCare, however, does not achieve this goal. We will be presenting solutions that offer Missourians more choices and lower costs; defend against health care coverage being denied or taken away; eliminate red tape to accelerate the development of life-saving devices and therapies; and protect Medicare for current retirees and preserving it for future generations.

In the coming months, much will be said about our efforts. But one thing is for certain: there is a better way. Republicans are intent on instituting that better way, fulfilling a promise made to the American people, ensuring greater access to affordable, quality health care.

Rep. Vicky Hartzler, R-Mo., is a senior member of the House Armed Services and Agriculture committees. She also serves on the Congressional-Executive Commission on China.