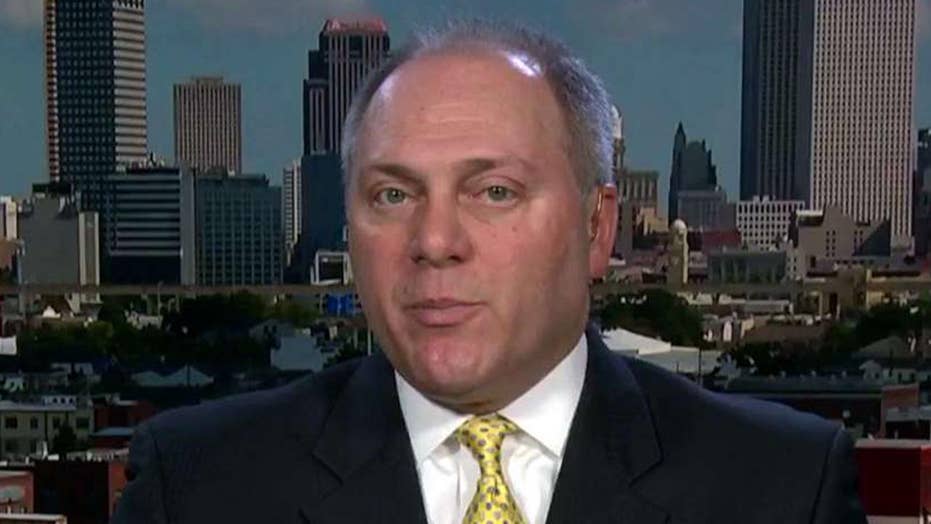 Scalise: Dems' call for violence a threat to our democracy<br>

On "Fox &amp; Friends," House Majority whip Rep. Steve Scalise calls on leaders from both parties to stand up against the rhetoric.

We are less than 20 days out from Election Day and the shocking reports of attacks against Republican candidates and volunteers keep getting worse.

In Minnesota, two Republican candidates for state office were punched.

Shane Mekeland is a first-time candidate who is unfortunately entering politics at a time when violence seems to be condoned or shrugged off by leading voices on the left.

Mekeland became a victim of this violent hysteria while at a restaurant speaking with local voters. He is now recovering from a concussion that resulted from a completely unprovoked sucker-punch to his head.

Minnesota state Rep. Sarah Anderson was punched by a man for having the courage to confront him as he committed the criminal act of destroying campaign yard signs. As she took action to defend her fellow Americans’ freedom of speech, she was violently assaulted in a gross intimidation attempt.

Late Wednesday, we learned of yet another alleged assault, this time against Nevada Republican gubernatorial candidate Adam Laxalt’s campaign manager, Kristin Davidson. Mike Stark, an employee of a liberal, George Soros-backed campaign group, has been accused of violently holding Davidson against her will while she was at work campaigning for Attorney General Adam Laxalt, who is the GOP candidate for governor.

As we continue to hear new reports of violence being committed against Republicans, simply because of their political views, it is clear that the most radical elements of the Democratic Party are taking over.

This isn’t the first time he has been accused of assaulting a woman for her political views. The press secretary for Interior Secretary Ryan Zinke allegedly experienced a similar violent intimidation attack from Stark. She filed charges and yet this Soros-funded group chose to continue employing him and sending him into situations where he could assault even more women.

As we continue to hear new reports of violence being committed against Republicans, simply because of their political views, it is clear that the most radical elements of the Democratic Party are taking over.

Democratic Party leaders have been reluctant to stop this. Remarkably few have spoken out forcefully against this violence, and what’s worse, some continue to stoke this hysteria instead.

We’ve heard Rep. Maxine Waters, D-Calif., former Secretary of State Hillary Clinton, and former Attorney General Eric Holder, all call on their supporters to harass Republicans.  Hillary Clinton even admitted, “You cannot be civil” as long as Democrats are in the minority in Congress.

Words have consequences and as all of these Democratic Party leaders know, they are in positions of great influence. Their supporters respond to their leadership. But instead of using this authority to strengthen our democracy, their calls for bullying and harassment have undermined it and have incited violence.

This might be the kind of intimidation you would expect from a tyrannical dictator in a Third World nation, but not from the freest country in the world.

I’m calling on all of us, my Democratic colleagues especially, to stand up to this bullying and harassment. With more Americans politically engaged than ever, this could be a turning point for our democracy.

As candidates throughout the country meet with voters to share their views and ask for their votes, they should do so without fear of being physically attacked for their beliefs.

Only when someone is losing the debate does he or she resort to violence, and there is no place in American discourse for harassment or intimidation. It is not who we are as Americans.

Getting this right is critical to the future of our democracy. That’s why it’s so disappointing that many on the left would seemingly rather stoke or condone aggression by their base than forcefully condemn political harassment and violence.

The American voters are wiser than those who think they can win by mob rule. In this race for the future direction of our country, it will be the party with the best ideas, not the party with the most bullies, that will be victorious on Election Day.