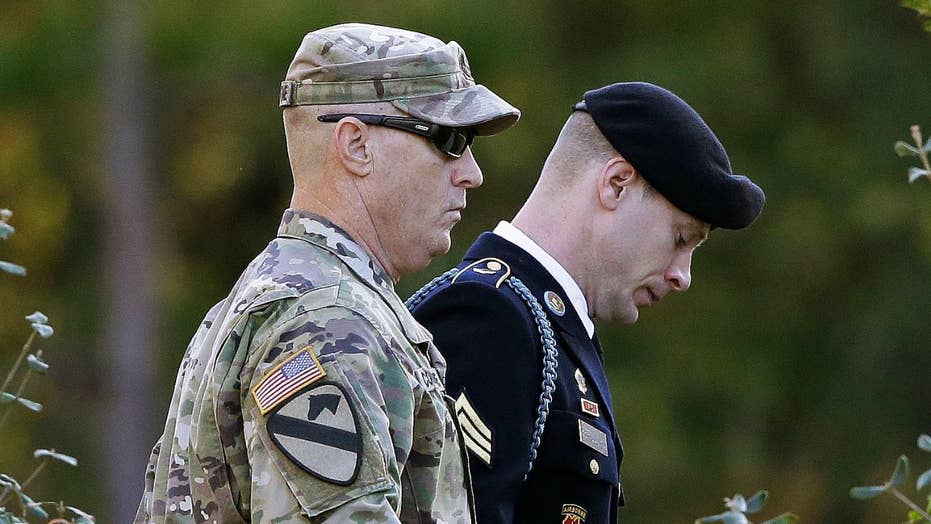 Bergdahl's defense lawyers had argued for no jail time after their client spent nearly 4 of the five years in a cage under Taliban captivity; Jennifer Griffin reports for 'Special Report.'

Like many Americans, I was upset by the decision by a military judge Friday to not give a prison sentence to Army Sgt. Bowe Bergdahl for desertion, misbehavior before the enemy and endangering our own troops.

I'm disappointed for all the troops who continue to uphold their sacred honor to our country and to the men and women on their left and right in places around the globe.

Bergdahl willingly walked off his Army base in Afghanistan in 2009 and was held captive by the Taliban for five years. A tremendous amount of military and other assets were brought to bear to find the missing soldier, because he is an American and that is what we do.

Bergdahl’s ideological agenda, his selfishness and his actions led to soldiers being wounded and killed as they searched for him. Many lives were forever altered.

Airplanes, guns, special forces, and soldiers were diverted from fighting a war to look for Bergdahl. Military members in other parts of Afghanistan had to potentially go without air cover or ground back-up while the search unfolded.

Make no mistake about it: in earlier times this desertion on a battlefield would have most likely resulted in a firing squad. While this is no longer the case, the penalty for Bergdahl’s crimes must be a harsh one.

Upholding the crucial element of trust between brothers and sisters in arms is a fundamental part of military discipline. The men and women of our military need to have the utmost confidence in those who serve beside them. No matter how hot, cold, wet, tired, or hungry they are, they will give their all, possibly even giving their own lives to see the mission through.

Serving our country in the U.S. armed forces is a privilege and honor only a minority of Americans from an unbroken line of patriots can claim. The standards of serving America are greater than any one person and the penalty of not meeting them on the battlefield must be a profound one. Our lessons learned are through the blood of our heroes.

Military members and veterans are rightfully supported during and after service, but we should never forget the families behind them. Our military has been strong these last 16 years because of the backbone that our strong families provide.

Because of the decisions made by Bergdahl, some of these sturdy family foundations will forever be cracked. Military families expect and demand more.

There has been a lot of noise about President Trump’s comments, both on the campaign trail and now as commander in chief. Having served next to some of the greatest people I will ever know, and armed with the knowledge from personal friends who knew what Bergdahl did and were taken out of the fight to find him, I have echoed some of the president’s statements.

To those criticizing President Trump for his opinions on this: be intellectually honest. Logically, you must also criticize President Obama, who paraded the deserter’s family in the Rose Garden and celebrated Bergdahl’s return.

President Obama’s national security adviser proclaimed that Bergdahl served with "honor and distinction,” while troops fumed knowing what had happened. If one commander in chief influenced Bergdahl’s trial, the other did as well.

It was important for Bergdahl to get a fair trial. We must respect and uphold our military justice system. Regardless of President Trump's or Obama’s rhetoric and despite Bergdahl’s suffering in Afghanistan, an example was not set Friday and his sentence was not severe enough for the crimes committed.

The only bit of justice for those killed and affected, and for the upholding of military integrity, is the sentence of a dishonorable discharge that Bergdahl received. Unless it is overturned on appeal, this is a sentence he will carry for the rest of his life.

Republican Scott Taylor proudly represents the 2nd District of Virginia. Taylor is a former Navy SEAL Sniper and the former chairman of the Special Operations OPSEC Education Fund, Inc., which works to protect America against political leaks. He is the author of "Trust Betrayed: Barack Obama, Hillary Clinton, and the Selling Out of America's National Security" (Regnery February 2015).