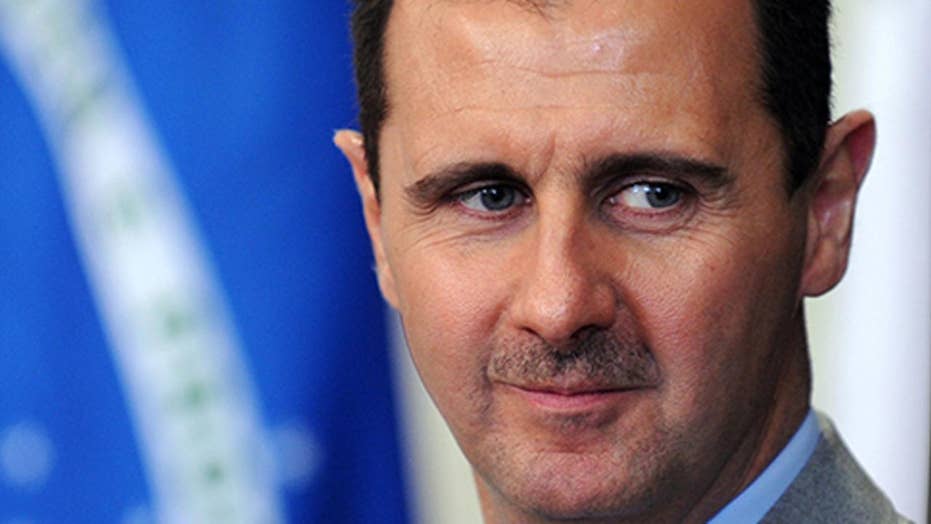 How Trump should respond to Assad if he launches an attack

Since the ceasefire in Syria agreed to by President Trump and Russian President Vladimir Putin in the summer, news reports on the Syria conflict have become blips on the radar and scarcely reported. However, just because we aren’t hearing about new atrocities committed by the brutal dictator Bashar Assad and his allies doesn’t mean the atrocities have stopped.

In the past two years, the Syrian conflict has shifted from a war for hope and opportunity to one in which Russia and Iran continue to prop up their evil ally Assad, while also killing innocent people with impunity.

Recently I read a Fox News article on the torture Syrians face inside Assad’s prisons in Syria, and shared it on my Twitter page. As I read some comments on my tweet, I realized that yet again, this is just one of many stories that the Assad regime will deny and then utilize its sympathizers across the world to lambast as “fake news.”

FILE - In this May 18, 2017 file photo, a Syrian National flag hangs out of a damaged building at the mountain resort town of Zabadani in the Damascus countryside, Syria. (AP Photo/Hassan Ammar)

Furthermore, stories like these will continue to be ignored by the rest of the world because that’s easier than accepting that the genocide still happening in Syria.

The Assad regime will tell you the witnesses from the prison are not in their right mind. It will  treat the validity of witness statements with the same disregard it treated video footage of search and rescue efforts by the White Helmets – rescue workers who risked their lives to save people after targeted bombs destroyed schools, homes and hospitals. But to Assad, reports of these atrocities are false and his regime has claimed the footage was staged.

In all likelihood, the Assad regime will deny the credibility of the Fox News article, just as it denies any article or report that sheds light on the atrocities being committed every day. For example, the regime denied the report that the its Sednaya Prison houses a crematorium to hide the evidence of slain prisoners’ bodies – despite the U.S. State Department confirming it as fact.

To this day, the Assad regime continues to deny any involvement in the April 4 sarin chemical attack in Idlib that claimed the lives of nearly 100 civilian men, women and children.

Denying true stories about its atrocities is nothing new for the Assad regime. It claims the suffering of its own people is just propaganda, as it did with Omran Daqneesh, the 3-year-old boy who became the face of that suffering. Photos emerged in September 2016 of the boy, his face bloodied and dusty with a dazed reaction from the barrel bomb that had just hit his home.

Just a year later, this little boy is being used by the media manipulators in the Assad regime, who claim that he was a prop for Western propaganda against the regime. The same regime that bombed his home and killed his brother is now saying that he is the victim of the Western world.

FILE -- Children sit outside their damaged house at the mountain resort town of Zabadani in the Damascus countryside, Syria, Thursday, May 18, 2017. A U.S. airstrike struck pro-Syrian government forces for the first time, hitting a convoy in the desert near the border with Jordan, U.S. officials and Syrian activists said, an apparent signal to President Bashar Assad to keep his forces out of a zone where U.S.-backed rebels are fighting the Islamic State group. (AP Photo/Hassan Ammar)

The attacks on innocent civilians continue across Syria. Just this week, Russian jets attacked a “de-escalation zone” in Idlib and claimed the lives of nearly 40 people in the nearby marketplace and villages. There were no ISIS fighters in Idlib, just another criminal bombing by murderous allies of the Assad regime.

While there is so much going on in the world today, we cannot forget the people of Syria. We need to continue bringing to light the ongoing atrocities of Assad and his Russian and Iranian backers.

Far too many people – world leaders, scholars, reporters, Syrian citizens – have become resigned to the situation in Syria. They believe Assad has won the war and now his Iranian patrons will become even more emboldened to wreak havoc across the region.

Nuclear deal or not, we know the true intentions of the Iranians and have seen their involvement in the atrocities under Assad. We know that the Iranians want to build a land bridge from Tehran to the Mediterranean Sea to expand their power grabs in the region. We cannot allow this to happen, and as such, I will continue to push for a strong U.S. response to Iran’s meddling in the region.

As the co-chair of the Friends of a Free Stable and Democratic Syria Caucus, I will encourage colleagues to join my efforts in bringing this issue to the forefront.

For six years, the people of Syria have lived through horrendous conditions. The lack of action by the West has caused them to believe there is no hope or opportunity left for them other than the brutality of Assad.

Without this hope and opportunity, without getting an education or the chance to live in peace, the children of Syria will continue to become prime targets for terrorist recruitment. It’s already happening at an alarming rate, and the glimmer of hope for these children diminishes every day that the global community fails to step in.

From sending greater humanitarian aid to imposing sanctions on the Assad regime, we are making efforts to help the Syrian people, but we must do more. It's up to all of us to join the conversation and do something to stop this genocide.

Call your congressman, call your senator, write to the White House, reach out to the State Department to see how you can help with humanitarian aid and be a voice.

More than six years of war and over 500,000 lives lost is too much to endure. We have an obligation to put an end to this suffering. I urge you to join me to put a stop to Assad and allow a chance at peace for innocent Syrians.