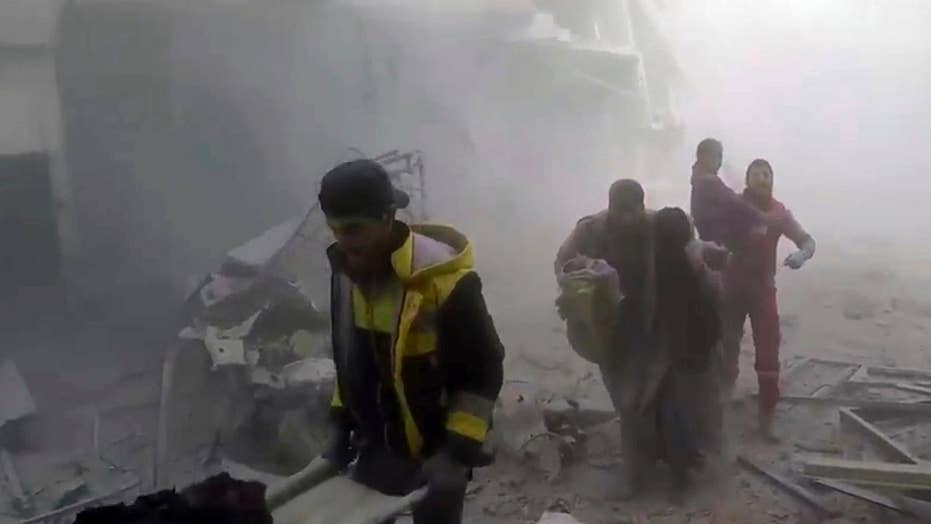 Brian McKeon: Neither the Syrian regime nor Russia care about civilian casualties.

This week marks the start of the eighth year of the Syrian War. On March 15, 2011 a peaceful uprising turned into a vial, bloody battle between the brutal regime of dictator Bashar Assad and the freedom-seeking Syrian people.

Over these past seven years, the world has watched as hundreds of thousands of Syrians were murdered by Assad and his cronies. Today the international community sits idly by as airstrikes from the Syrian regime and its Russian and Iranian backers rain down and destroy the country and its people, and further sow chaos across the region.

These statistics are hard to grasp, and the images and videos of the devastation are hard to stomach. The atrocities by Bashar Assad on the people of Syria are horrific, appalling and inhumane.

As a member on the House Committee on Foreign Affairs, I’ve had the privilege of meeting with Syrian defectors like Caesar, victims of Assad’s brutality like Mazen al Hummadi, and aid groups like the Syrian American Medical Society (SAMS) and the White Helmets (Syrian Civil Defense) that work to help Syrian civilians.

Some of the stories of these people left our members near tears, while many stories left us physically sickened, horrified by what Syrians have seen and endured.

With Russia and Iran supporting him, Assad has used every weapon in his arsenal and has no fear of repercussions. Early on in the war, President Obama failed to adhere to his “red line” against the use of chemical weapons in Syria. And even though he said the use of such weapons was a “game-changer,” nothing changed.

Assad ignored calls for his resignation when he was urged to step aside for the sake of the Syrian people. He instead continued to use whatever means necessary to gain control over his people, or else eliminate them.

In 2013, the Ghouta chemical attack left innocent children gasping for their last breath, and took the lives of over 1,500 Syrians.

The Organization for the Prohibition of Chemical Weapons has confirmed over 30 chemical weapons attacks have taken place in Syria since the start of the war. Assad has used these chemical weapons in clear violation of international law, and in violation of countless resolutions by the United Nations Security Council.

The situation in Syria today is devastating, with no signs of immediate improvement. The proposed ceasefires are weak and have failed repeatedly in the past. As the conditions worsen, and as the West fails to act, the people of Syria are left to believe no one cares about their suffering and that nothing will be done to stop the brutality of the Assad regime.

Without hope or opportunity, and without education or a chance to live in peace, the children of Syria will continue to be a prime source for terrorist recruitment. Failing to act in Syria is opening ourselves and our allies to significant dangers to our own national security, and endangers our future generations in the years to come.

It’s time for the United States to exert leadership in Syria.

I am co-chair of the Friends of a Free, Stable and Democratic Syria Caucus, a bipartisan group that has urged the removal of Assad from power and for greater humanitarian aid to be allowed into the region. We have sponsored legislation that condemns the Assad regime, and we’ll be voting on legislation this week to ensure that the security of the Syrian people will be central to reconstruction and stabilization efforts in Syria.

Our bipartisan bill, H.R. 4681, is called the No Assistance for Assad Act. It would condition American support for reconstruction efforts in Assad-controlled territories on Syrian commitments to human rights; a political transition: and the safe, unfettered and voluntary return of Syrian refugees and internally displaced people.

According to the United Nations, over 12 million Syrians have either fled to neighboring countries or are internally displaced within Syria. The international community must step in to help, and much of this starts with putting a stop to Assad’s murderous rampage.

We can strengthen sanctions and put greater pressure on the Assad regime from other global leaders. We can employ safe zones or no-fly zones, and send more humanitarian aid into the country.

But above all else, we cannot turn a blind eye to the genocide before us.

The death toll in Syria continues to climb, four out of five Syrians now live in poverty, humanitarian access remains constrained by conflict, and the economy there has contracted by an estimated 40 percent since the start of the war.

The destruction and devastation can hardly be grasped in numbers alone, but watch the coverage and look at the images coming out of the besieged areas like Eastern Ghouta and Idlib. The brutality of the Assad regime is everywhere in Syria, and the effects will most certainly ripple outside those borders, creating even more chaos in the Middle East for us and our allies.

If we fail to act and if we fail to lead, we are failing humanity. Because failing to act in Syria is a failure on us all. We must learn from history, learn from past mistakes, and take action as a global leader for freedom and hope.

Allowing Assad to wreak such havoc on his own people sends a terribly wrong message to other human rights abusers around the world. What’s happening in Syria right now may very well be the worst humanitarian crisis of our time, and unless we put a stop to Assad, it will be a tragic, neglectful stain on the legacy of our great nation, too. We can and must do better.