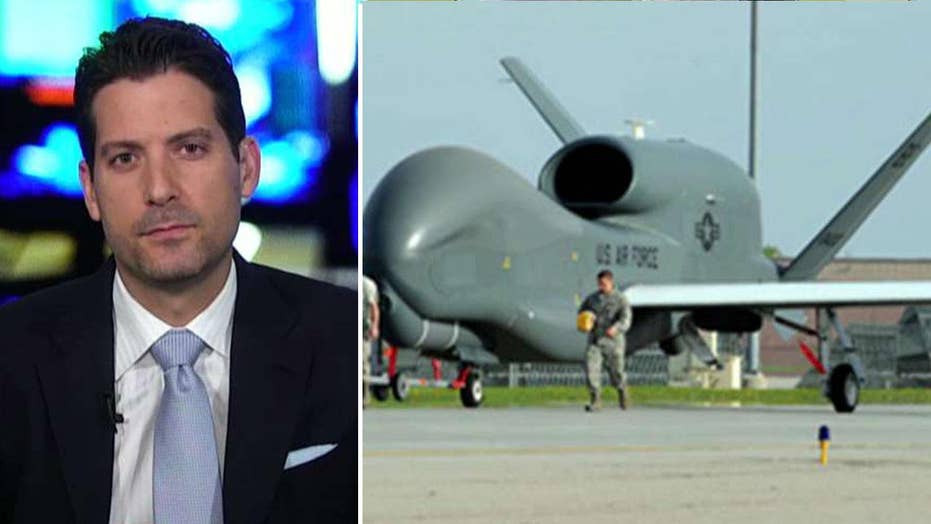 Former Army intelligence and special operations soldier Brett Velicovich explains why the BAMS-D shot down by Iran wouldn't have been operating in their airspace.

Do you go to war with Iran over a lost drone?

Not quite. But with Iran willing to shoot down a major U.S. Navy asset like the unmanned Navy RQ-4 high-altitude surveillance plane, the Trump administration needs strike options if Iran escalates again.

For now, the drone loss alone does not breach Secretary of State Mike Pompeo’s warnings. The U.S. lost dozens of manned reconnaissance planes to Soviet interceptors during the Cold War.

US NAVY DRONE SHOT DOWN BY IRANIAN MISSILE OVER STRAIT OF HORMUZ IN 'UNPROVOKED  ATTACK,' CENTRAL COMMAND SAYS

Fortunately, the U.S. Navy “flight crew” of this RQ-4 was operating it from the U.S. with ground crews in the Middle East for launch, recovery and maintenance. The Tritons have a lot of automatic features but they don’t fly themselves except in back-up mode.

Still, the unprovoked attack on the U.S. Navy Triton was unquestionably an escalation by Iran.

The drone was on the look-out for Iranian naval attacks, and it was guarding commercial shipping, US and allied naval vessels.  The RQ-4 is not your backyard drone.  It’s really an unmanned plane derived from the U.S. Air Force Global Hawk and optimized for maritime work.  The drone has a wingspan of 130 feet and at 32,000 pounds, it weighs as much as a city bus or Class 7 truck.

Was the RQ-4 in international airspace? Probably. The drone didn’t need to loop over Iran’s land mass to carry out its overwater mission.

And get this. The RQ-4 is unarmed. This surveillance asset posed absolutely no threat of any kind to Iran. Except, of course, for revealing Iran’s naval activity.

More than any other single factor, Iran’s military activity is breaking apart the 2015 nuclear deal. Iran has acted foolishly, again.

Claiming the RQ-4 shoot-down is yet another sign that the Iranian Revolutionary Guard Corps under the direct command of Ayatollah Ali Khamenei is spoiling for a fight.

This shoot-down and Iran’s celebration of it will help the Trump administration make the case with Great Britain, France and Germany that Iran can’t be trusted.

Aerial surveillance is already making a difference.  German Chancellor Angela Merkel has overruled her foreign minister and acknowledged “strong evidence” of Iran’s involvement in the tanker shipping attacks, according to Germany’s Deutsche Welle newspaper on June 18.

So the RQ-4 and its surveillance team-mates are doing their job well.

By the way, there’s at least a possibility this drone was in mechanical trouble and Iran had an easy shot. The Navy dropped a Triton in a Chesapeake Bay swamp in 2012 on a test flight and smacked another on the runway in California in the fall of 2018.  Accident rates go with the territory of drone surveillance.

The network of surveillance is driving Iran’s Revolutionary-Guard forces crazy. Back in the 1980s tanker war, the U.S. didn’t have anything like this quality of reconnaissance.

Today, other drones like the MQ-9 Reaper – Iran shot at one last week – provide full-motion video of Iran’s naval activity.

You can be sure all crews flying manned and unmanned aircraft in the region are fully briefed and switching over to combat tactics for an active air defense threat zone.

What will Iran do next? Iran’s leaders believe their naval attacks can splinter the U.S. from Great Britain, France and Germany in the wake of the failed 2015 nuclear deal.  Iran’s Revolutionary Guard leaders think their fast, small boats will make it too costly for the US and allies to enforce freedom of navigation in the Strait of Hormuz.

They are so wrong. Iran can’t mass its small boat fleets without being detected – by assets like the RQ-4. Land-based aircraft, and ships and helicopters from U.S. Navy vessels pose a major threat to the would-be Iranian boat swarms.

If Iran launches more attacks, the U.S. and allies can retaliate with precise, unstoppable strikes on Iran’s naval forces and shore infrastructure.  Other  RQ-4s may assist with targeting data.  Iran’s overblown strategy of lashing out in the Persian Gulf leads nowhere.

Iran generated this crisis by announcing a 60-day countdown until it restarts nuclear programs.  The deadline is July 7.

Constant military surveillance of the Persian Gulf chokepoints gives the U.S. a big military and diplomatic advantage. With the full-motion video from MQ-9 Reapers and all-weather images from RQ-4 and other platforms, it’s easy for U.S. Central Command to show allies what Iran is really up to.