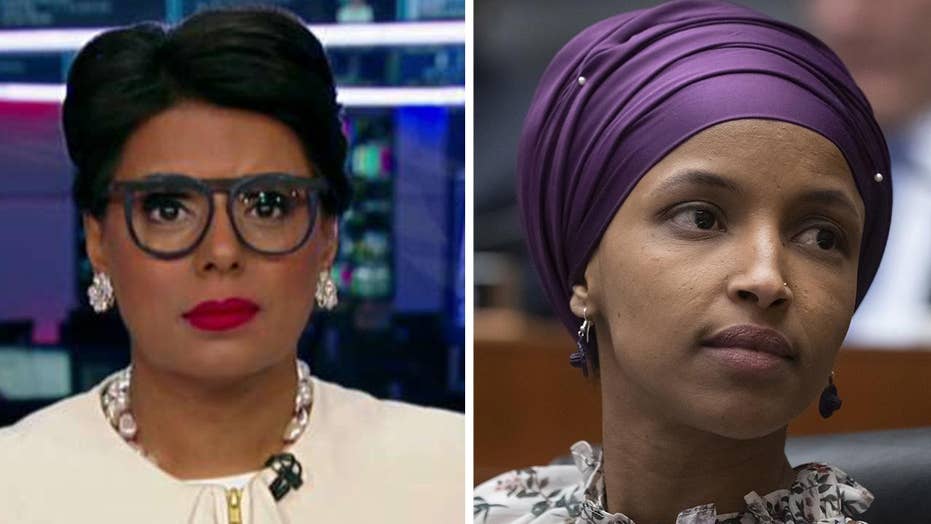 Dr. Qanta Ahmed: Rep. Omar is a disgrace to Islam

Council on Foreign Relations member Dr. Qanta Ahmed weighs in on Rep. Ilhan Omar's controversial comments and her role as a representative of the Islamic faith.

Rep. Ilhan Omar continues to be an embarrassment and a disgrace for me and other American Muslims with her outrageous, ignorant, anti-Semitic and now anti-American comments.

And while Omar, a Minnesota Democrat, holds herself out as a proud Muslim, she repeatedly projects a distorted and patently Islamist interpretation of Islam – a religion that in reality stands for the values of justice, peace and ethical conduct.

Sadly, Omar gives millions of Americans a false impression of what Islam is and what we Muslims believe and stand for. While she denounces prejudice against Muslims, her aberrant views on Islam fuel prejudice against me and my coreligionists by distorting who we are while defaming and dishonoring the great monotheism of Islam.

Omar’s latest absurd and insulting comment came to light just a few days ago. Describing the horrific Islamist terrorist attacks on America on Sept. 11, 2001 that killed almost 3,000 people and injured more than 6,000 others – including many Muslims – Omar told a Council on American-Islamic Relations (CAIR) fundraiser: “CAIR was founded after 9/11 because they recognized that some people did something, and that all of us were starting to lose access to our civil liberties.”

First, Omar betrayed her ignorance, because CAIR was founded in 1994. Second, the congresswoman displayed an appalling and dismissive insensitivity to the worst foreign attack on America in our history, claiming almost 600 more lives than the Japanese attack on Pearl Harbor in 1941.

Omar's grotesque trivialization of a national tragedy amounts to an explicit denial of 9/11 – a desecration of all the lives erased that awful day. This denial is inexplicable unless she has strong and covert Islamist sympathies.

Some estimate more than 2,100 first responders who worked in Ground Zero in New York City in an effort to save lives and then find the deceased after the attacks have died of diseases they incurred. More than 10,000 people have been diagnosed with cancer related to the World Trade Center attacks and over 43,000 have been certified with World Trade Center-related illnesses.

Omar should be honest. There is no escaping the fact that the atrocities of 9/11 were not simply committed by “some people.” Islamist jihadists were responsible and they came from within the Muslim fold.

Most of the almost 490,000 Americans who either lived near Ground Zero or responded to the recovery and rebuilding efforts have never enrolled in the government’s health programs. So we don’t know how many more have suffered health problems from the terrorist attack on the twin towers.

I am a physician now working in New York and I’m affiliated with New York University Winthrop Hospital’s World Trade Center Health Program. I see the burden of Sept. 11 on a regular basis, treating brave and selfless first responders who still suffer from complex sleep disorders – including post-traumatic stress – that I specialize in treating.

President Trump responded to Omar’s comments by posting a video on Twitter mixing her words with terrible scenes of the Sept. 11 attacks. His action can be considered insensitive to many 9/11 survivors and family members – including some of my own patients – who can’t view these pictures without experiencing repeat trauma.

However, the president’s exposure of Omar’s hypocrisy and offensive diminishment of 9/11 was both legitimate and necessary.

In her dismissal of Sept. 11, Omar callously erased the deep suffering of every survivor and family I attend, and everyone else still impacted by the terrorist attacks.

Like each person old enough to remember Sept. 11, 2001, the day will be engraved in my mind for as long as I live.

I was working as a physician in Riyadh, Saudi Arabia. It was 4 p.m. when I turned on my TV and watched the world come to a standstill as I witnessed (along with people around the world) the jet planes go through the World Trade Center, and soon after saw the twin towers collapse.

Mass murder on live TV – an unbelievable nightmare, like a horror film come to life.

Living at the time in the Saudi Kingdom – the epicenter of Islam – as the world learned the identity of the 9/11 terrorists, I wondered how my religion had been hijacked by suicidal killers who claimed they had a religious duty to kill innocents.

And I knew from that moment that these murderers would now become the face of Islam for many non-Muslims who know little about a religion with more the 1.6 billion followers around the globe.

Of course, only the perpetrators of the 9/11attacks and their supporters are to blame for their evil and immoral massacre. But on that sad day it became the responsibility of every Muslim to understand the heinous perversion of Islam known as Islamist jihadism and to stand against it.

In her grotesque trivialization of the Sept. 11 attacks, Omar betrays the Islam she claims to follow. She also denigrates every victim and survivor of the attacks and does me and every other Muslim a grave dishonor.

And while Omar relishes in flaunting her Muslim identity, she categorically fails in her Islamic duty. Islam is very clear in assigning responsibility for wrongdoing. Each Muslim has a clear-cut duty to himself or herself, to God and to society.

In fact, the holy texts of Islam emphasize that one's greatest allegiance should be to justice – even if doing so demands superseding family and coreligionist ties.

"Be strict in observing justice, and be witness for Allah, even though it be against yourselves or against your parents or kindred," the Koran says in Chapter 4, Verse 36. Omar fails on every count when her remarks trivializing the Sept. 11 attacks are seen in the light of this verse.

There is no question that the Sept. 11 attacks were an act of war launched through evolutionary Islamist jihadism, which has since become the hallmark of radical Islam.

Radical Islam – also known as Islamism – is a deviant, fictional and extreme distortion of true Islam, perpetrated by Islamist Muslims who use it to justify hatred and lethal violence that in reality have nothing to do with Islam.

Omar should be honest. There is no escaping the fact that the atrocities of 9/11 were not simply committed by “some people.” Islamist jihadists were responsible and they came from within the Muslim fold.

The vast majority of the world’s Muslims reject the cult or murder and death embraced by the hijackers of our beautiful religion, and in fact, many Muslims continue to die at the hands of Islamist jihadism. We each bear a responsibility to expose it.

Finally, let me set the record straight on Omar’s frequent complaints about how she and other Muslims are being persecuted and discriminated against in the United States today.

As a Muslim woman of color and immigrant – just like Omar – it’s logical to assume that if there was pervasive anti-Muslim discrimination in the United States I would be aware of it.

But in fact, Muslims have not experienced a contraction of civil rights in the U.S. since the Sept. 11 attacks. We continue to have the same rights as all other Americans.

Rather than being second-class citizens, Muslims born in America and immigrating here legally have full citizenship open to us. We are all allowed to both be and feel fully American and recognized as such, unlike the way many Muslims tell me they feel in European nations.

The greatest obscenity in the lie that Omar pedals is that she – along with millions of other Muslims in America – is somehow victimized. Do not believe this.

Muslims in America are mainstream and most are middle-class. Some of us are even wealthy. Many of us are highly educated, upwardly mobile and among the fastest immigrants to climb the economic ladder and earn six-figure incomes. This is in stark contrast to Muslims in Europe, where Muslims are much less affluent than the general population.

The myth of Muslim victimhood is an Islamist one. It is completely false in the setting of Islam in America and in comparison to Islam in the wider Muslim-majority world.

For me, condemning Omar’s trivialization of the Sept. 11 mass murders is an act of being fully American, being a physician advocate for my 9/11 survivor patients and their families, and at the same time – keeping in line with Islam’s clear teachings – being fully Muslim.

Omar’s words are a grotesque injustice against people who have already experienced diabolic injustice.

I thank God every day that I was able to immigrate to the United States of America, where I am now a proud citizen in a country I love and where I enjoy the blessings of  American liberty and protection of my rights under the U.S. Constitution. Wouldn’t it be nice to hear Rep. Ilhan Omar express these same sentiments?  Don’t expect it anytime soon.