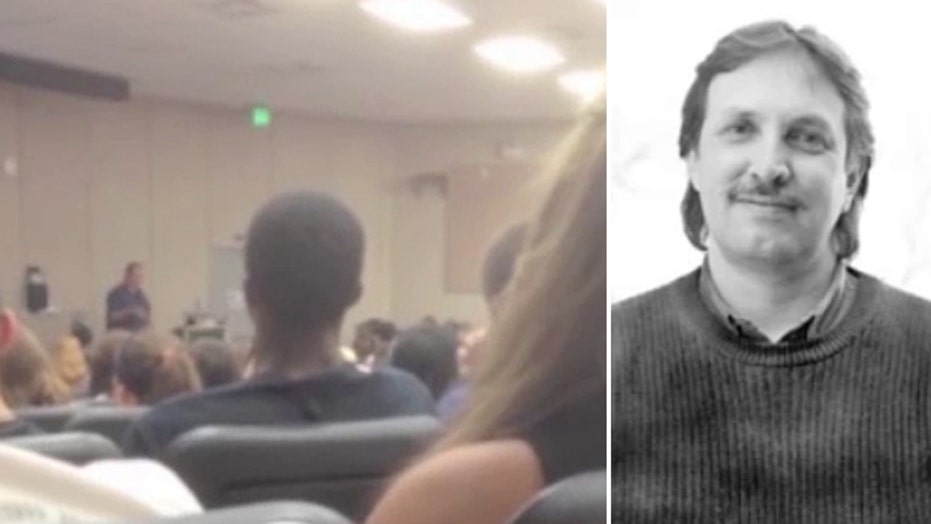 Editor's note: Michigan State University announced Thursday that Professor William Penn has been reassigned. The university released a statement saying, “some of his comments were inappropriate, disrespectful and offensive and may have negatively affected the learning environment.” The Michigan GOP issued a statement denouncing Penn’s remarks  and demanded his resignation. “His use of political intimidation is shameful and should not be tolerated,” Michigan GOP Chairman Bobby Schostak said.

Michigan State University is investigating a video that purportedly shows a professor telling his class that Republicans were a bunch of “dying white people” who “raped this country” and wanted to prevent black people from voting.

“MSU is thankful we’ve been made aware of the situation,” spokesman Kent Cassella tells me. “We will be looking into it.”

The video was secretly filmed Aug. 29th by a student on the first day of a creative writing class. The professor can be seen and heard railing against Republicans and disparaging former presidential candidate Mitt Romney’s wife.

The watchdog group Campus Reform, which first reported the incident, identified the professor as William Penn. According to his online biography, Penn teaches in the university’s creative writing program and is a founding member of the Native American Writer’s Circle.

MSU said they were not prepared to identify the professor and Penn did not return numerous messages seeking comment.

The student asked to remain anonymous over fears of reprisal. However, I have verified the individual’s identity. The student is a sophomore political science major.

Once his professor started talking about politics, the student started filming the discussion. He then sent the video to Campus Reform, a website that routinely exposes bias on college campuses.

“I had seen videos on Campus Reform before that dealt with these issues and I could not believe it was happening,” he told me. “The terrible words he fired off about Republicans were very disconcerting.”

“If you go to the Republican convention in Florida, you see all of the old Republicans with the dead skin cells washing off them,” the professor can be heard telling students on the video.

“They are cheap. They don't want to pay taxes because they have already raped this country and gotten everything out of it they possibly could.”

At one point during the eight-minute video, the professor accused Republicans of devising a plan for "getting black people not to vote."

“They don't want to pay for your tuition because who are you?" he asked. "Well, to me you are somebody."

He also issued a veiled threat to his students.

“I’m a college professor,” he said. “If I find out you are a closet racist I am coming after you.

He told them the country is “still full of closet racists.”

“What do you think is going on in South Carolina and North Carolina. Voter suppression. Its about getting black people not to vote. Why? Because black people tend to vote Democratic.”

“Why would would Republicans want to do it?” he asked. “Because Republicans are not a majority in this country anymore. They are a bunch of dead white people."

“Ann Romney a first lady?” he asked. “And remember this if you are just going to be a greedy bastard all your life and just try to get things (unintelligible) In order to be rich like Mitt Romney and hide all your income offshore, in the Cayman Islands, you have to be -- think about it -- Mitt Romney. Anybody here want to be Mitt Romney? Him? I mean (sigh) married to her?”

The student also told me that the attacks on the Romneys were the most troubling part of the lecture.

“He made fun of her voice and kept scoffing at their relationship,” the student told Fox News. “You can make fun of a candidate and their party all you want but when you get personal, when you start attacking their spouse in the way he did, it’s inexcusable.”

Cassella said the university is taking the matter seriously.

“At MSU it is important the classroom environment is conducive to a free exchange of ideas and is respectful of the opinions of others,” he said.

But that’s little comfort to the young political science major who filmed the episode. He said this type of liberal bias is commonplace on college campuses around the nation. And he said many conservative students feel intimidated by left wing professors.

“I have felt it necessary to write a few papers with a left-leaning bias out of fear of receiving a lower grade for writing what I truly believe,” the student told me.

The Michigan State University video is further evidence that American taxpayers are being forced to pay the salaries of aging liberals who are using their classrooms to intimidate conservative students and advance a far-left, anti-American agenda.

There’s an old Southern saying – you can’t teach stupid. Sadly, on many of our public university campuses, stupid is doing the teaching.