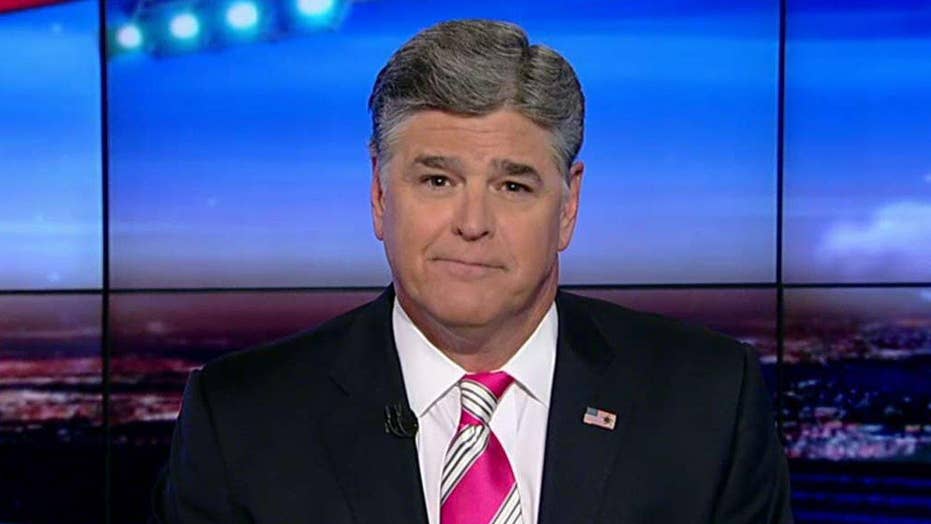 Hannity: Breaking down the ObamaCare disaster

A desperate President Obama went to Capitol Hill Wednesday in a last-ditch effort to try and save his disastrous health care law, but all he managed to do was get left-wing lawmakers to back the monumental failure with old, tired and divisive rhetoric.

They want to scare the American people because Republicans want to repeal and replace ObamaCare. But all they can offer are lame talking points.

Democrats were so proud of the clever play on Trump’s campaign slogan that each one rushed to the podium to repeat it. Over and over.

But while Democrats were pointing fingers and spouting canned lines, Vice President-elect Mike Pence was meeting with Republicans to formulate a real plan to repeal and replace the disastrous law.

“The first order of business is to repeal and replace ObamaCare,” Pence reasoned. “ObamaCare has failed. And the American people have sent a decisive message to Washington, D.C., that they want ObamaCare to be repealed and replaced with health care reform that will lower the cost of health insurance without growing the size of government.”

Republicans need to make sure they keep their promises and move quickly to repeal and replace ObamaCare. But they also need to be careful, because Democrats have already shown they are not going to blame themselves when ObamaCare finally dies and crumbles.

President-elect Trump warned the GOP in a tweet that, "Republicans must be careful in that the Dems own the failed ObamaCare disaster with its poor coverage and massive premium increases, like the 116 percent hike in Arizona Also, deductibles are so high that it is practically useless. Don't let the Schumer clowns out of this web."

Trump is 100 percent right. Republicans need to make President Obama and the Democrats own every lie they told, every failed promise they didn't keep. And there were a bunch of them.

Obama promised that the average family would save $2,500 per year. Well, since 2009, the average American family is paying $4,100 more for health care.

We also know that millions of Americans lost their doctors and their plans or both. And that is just the start of this ObamaCare disaster.

Here's what the president and Democrats own, because remember, not a single Republican voted for this law: ObamaCare premiums this year along are increasing by 25 percent on average. Premiums on average for a family of four making $60,000 a year will spike by 43.6 percent. Deductibles for the same group are exploding by 22.9 percent.

The misery doesn't end there. The president promised free-market competition and choices for Americans on the exchanges, but the opposite has happened. Major insurers like Humana, Aetna, United Healthcare and Blue Cross Blue Shield are all pulling out of states because they are losing money on the exchanges. Humana alone lost over $1 billion just for participating in ObamaCare. In states like Alabama, Alaska, Oklahoma, South Carolina and Wyoming, people have only one insurer to choose from now.

And then there's all the taxes. The congressional Joint Committee on Taxation has previously found that the middle class will face $377 billion in tax increases, courtesy of ObamaCare. According to a recent study, the surging ObamaCare premiums will cost American taxpayers an extra $9.8 billion this year alone.

The negative impact of ObamaCare is obvious, and it helped propel President-elect Trump to victory. Sure, there are certain aspects of the law that Republicans will keep, like coverage for people with pre-existing conditions and allowing children to stay on their parents’ plan until age 26. But ObamaCare itself is a single, fundamental, massive big government failure that needs to be completely scrapped and redone. American consumers deserve better care, free-market competition and lower costs.

Adapted from Sean Hannity’s monologue on Jan. 4, 2017 airing of “Hannity.”