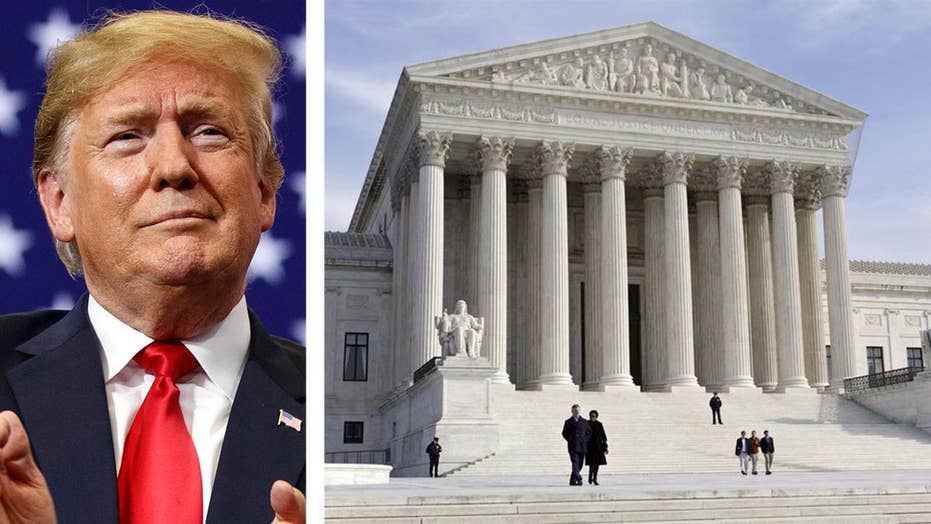 Who are the frontrunners to replace Justice Kennedy, and what do we know about them? #Tucker

Both conservative legal scholars and activists say they are pleased with the “short list” that President Trump will choose his Supreme Court nominee from. All have solid academic and legal credentials along with a strong commitment to not legislating from the bench.

Given that the process of picking a Supreme Court nominee is inherently political, President Trump won’t surprise anyone if his final choice involves some political advantage to him or Republicans. If that’s the case he couldn’t do better than to pick U.S. Circuit Court of Appeal Judge Amul Thapar as the first American of Indian or Asian descent to be nominated. Thapar, a native of Troy, Michigan, is a shining example of the success of the four-million strong Indian-American community, which now has the highest median household income in the country.

“Indian-Americans are an important, educated, and fast-growing portion of the electorate. They are poised to quickly become an influential part of American politics punching far above the weight of their numbers,” says Henry Olsen, a political scientist and author of “The Working Class Republican: Ronald Reagan and the Return of Blue-Collar Conservatism."

Judge Thapar is a favorite of Senate Majority Leader Mitch McConnell, going back to when the 49-year-old Thapar was appointed U.S. Attorney in Kentucky a dozen years ago.   “I think he’s absolutely brilliant, with the right temperament,” McConnell told reporters over the weekend.

But that political endorsement is backed up by many in the legal community who rave about Thapar. Louisville attorney Ned Pillersdorf, who calls himself a “Bernie Sanders Democrat,” told the Louisville Courier-Journal that Thapar is fair and judicial. “There are much, much worse Trump nominees they should go after...If I get to talk to Bernie, I’d say vote for him.” Thapar has shown he can be tough on both defendants and the government. He once sentenced a woman to 18 years in prison for assisting her jailed daughter to obtain drugs that killed her. But he also took the side of seven people who lost their disability benefits because their lawyer was accused of obtaining them improperly. Thapar wrote that the seven were given fewer rights by the government than a “member of al-Queda.”

Appointing Amul Thapar to the Supreme Court is an opportunity to make a bold outreach to the most prosperous of America’s immigrant communities and one that is increasingly important politically.

Of course, Asians in America is a term that sweeps together dozens of cultures, languages and religions. Tony Choi, the Social Media manager for the Asian group Sons and Brothers, says “There are a lot of Korean Americans who don’t identify with Indian or Bangladeshi Americans. There’s a common language with Latino Americans, and a common history of colonialism, a shared religion. With Asians, you have Protestants, Catholics, Muslims. We are not as cohesive or monolithic as people think we are.”

True, but pollsters I talk to say they wouldn’t be surprised if the nomination of a person of color had a positive impact on the frayed image of Republicans as a party that welcomes newcomers. Former New Jersey Governor Chris Christie, who says he owed much of his narrow 2009 victory margin to his strong showing among Indian-Americans in Middlesex County, told me, “If you show up at Asian events, if you ask for their votes, if you give them recognition by appointing the best of their community you can get their support.”

Of all the Asian voting blocs, Republicans have had one of the hardest times with Indian-Americans. “Indian-Americans consistently over time tend to be the most progressive leaning among Asian groups,” Karthick Ramakrishnan, a political scientist who directs the National Asian American Survey told Politico last year. His survey before the 2016 election found that only 18 percent of Indians had a favorable view of the Republican Party, compared with 64 percent who viewed the Democratic Party favorably.

But Trump was able to make inroads especially with his promise to crack down on Muslim terrorists and becoming the first presidential nominee of a major party to attend a Hindu rally. Trump told the rally in New Jersey’s Middlesex County that India and the US would be “best friends” if he were elected and he called Prime Minister Narendra Modi a “great man.” Two of Donald Trump’s children followed up by visiting several Hindu temples in Virginia and Florida. (About half of Indian-Americans in the U.S. are Hindu). Shalabh Salli Kumar, the founder of the Republican Hindu Coalition, has told allies that Republicans stand to benefit from donations from well-to-do Indians as more and more of their group achieve high government office.

Trump has followed up his Indian-American outreach while in office. Politico reports that “no White House has had more high-level Indian-American appointees than Trump’s.”  They include Nikki Haley, the U.S. ambassador to the United Nations, Ajit Pai at the Federal Communications Commission, Seema Verma at the Center for Medicare Services and Neomi Rao at the Office of Management and Budget.

Republican strategists believe the Indian-American community can be won over.  They are incredibly successful. They may be just 1.1 percent of the country, but they are 3 percent of the engineers, 7 percent of the IT labor force and 8 percent of physicians.  They also have incredible rates of business formation - some 10 percent to 20 percent of tech start-ups have Indian founders. Indian leaders in business include Salya Nadella at Microsoft, Sundar Pichal at Google and Indira Nooyi at Pepsico. As Shikha Dalmia points out in Reason magazine the Indian story is “even more remarkable because Indian-Americans don’t have ancestors going back generations and hence little social support. In fact, over 87 percent of Indian-American adults in America weren’t born here and 37.6 percent of them have been here about 10 years.”  Needless to say, the vast majority of Indian immigrants entered the U.S. legally.

It’s clear that President Trump wants to transform the Supreme Court and shift it towards adherence to the Constitution. But at the same time, by appointing Amul Thapar to the Supreme Court, he has the opportunity to transform the image of the Republican Party and make a bold outreach to the most prosperous of America’s immigrant communities and one that is increasingly important politically.