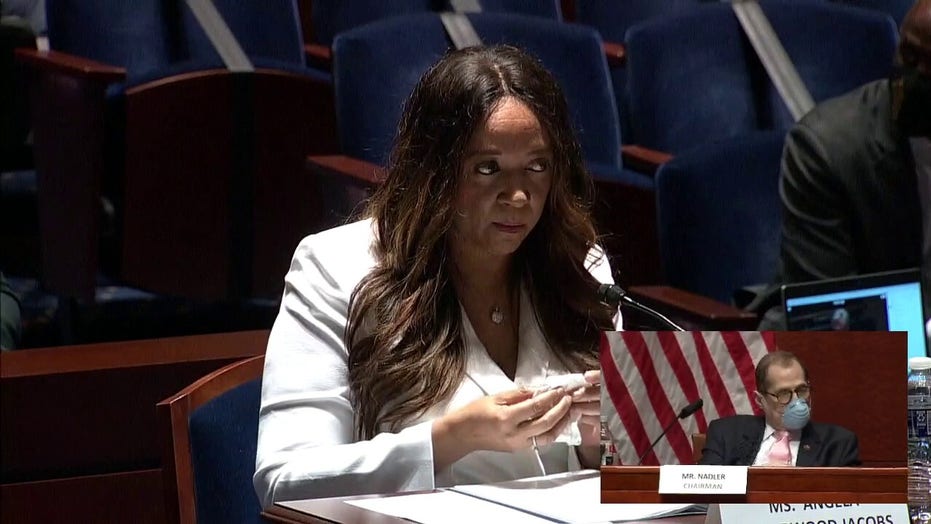 “I'm wondering where the outrage for a fallen officer is, that also happens to be African-American?"

These gripping words came from the sister of Patrick Underwood, a law enforcement officer with the Department of Homeland Security’s Federal Protective Services who was killed during the recent rioting and chaos in the streets.

In her testimony before the House Oversight Committee regarding police reform, Underwood's sister, Angela Underwood-Jacobs, wanted to know why the life of her brother, a beloved law enforcement officer, is any less important than that of George Floyd.

NEWT GINGRICH: IF LIBERTY AND JUSTICE FOR ALL DO NOT PREVAIL OVER ANGER, ANARCHY, EXPECT THIS

Patrick Underwood’s funeral last Friday received no live national television coverage. No famous national civil rights leaders were there. His family and friends, his fellow law enforcement officers and DHS Acting Secretary Chad Wolf were there, but where were the others?

Black lives do matter! All black lives, including those wearing blue.

Officer Underwood was assassinated while guarding the Ronald V. Dellums Federal Building in Oakland on May 29. A van pulled up and someone inside fired gunshots at the guards in front of the building. Underwood was killed and his partner, Sombat Mifkovic, was critically injured but is expected to recover.

Last year alone, 89 law enforcement officers were killed in the line of duty. Their lives matter too. In 2018, our police arrested nearly 12,000 people for murder and manslaughter, 25,000 people for rape, and nearly 1.5 million for assault.

Who are these police officers protecting? All of us, regardless of skin color. But, those in high crime urban areas of the country are those most in need of protection by law enforcement.

All of America was horrified and appalled over the senseless and tragic death of George Floyd and rightly so. The mayhem that ensued, however, cannot be excused or justified, particularly when it causes the death of another. Officer Underwood was killed for no other reason than he was in uniform.

The police are not the enemy. Justice is the answer and rooting out bad cops is the solution.

The police are not the enemy. Justice is the answer and rooting out bad cops is the solution.

Derek Chauvin, the police officer who has been charged with second-degree murder in the killing of George Floyd, is a bad cop. According to news reports, Chauvin had 18 prior complaints about him with the Minneapolis Police Department's Internal Affairs division.

No doubt, by what we know from the horrific video in which this officer displayed utter disdain and disregard for human life, this is how he operated every day on the job, abusing his authority and treating potential suspects with insulting language.

In a recent interview, I was asked if Chauvin would do the same to a white man. The furthest I should have gone was to say "maybe.” We cannot know how Chauvin would have acted given a victim of a different race, sex or age, but we do know that power can corrupt people, if they can get away with it. Chauvin will not get away with it. He should have been identified as a problem long ago and dismissed from the police department.

While the overwhelming majority of the nation’s law enforcement are like Patrick Underwood and not like Derek Chauvin, there are numerous steps we can take to assure these terrible incidents don’t happen.

President Trump’s executive order that he announced last week is the first step to getting the national debate going. It recognizes that we must require high standards of individual police officers and the departments in which they work.

Use-of-force and de-escalation training that is reviewed and approved by reputable independent bodies is critical to maintaining a professional law enforcement workforce.

The order provides incentives for law enforcement agencies to use a nationwide database to track terminations, criminal convictions and civil judgments against law enforcement officers for excessive use of force, which will create accountability among agencies.

Americans have rightly acknowledged the urgency to prevent the death of another George Floyd.

How do we prevent the death of another Patrick Underwood?

President Trump’s order will ensure we redouble our efforts at the Department of Homeland Security and across the nation to engage directly with our neighbors and secure lasting relationships between the public and law enforcement.