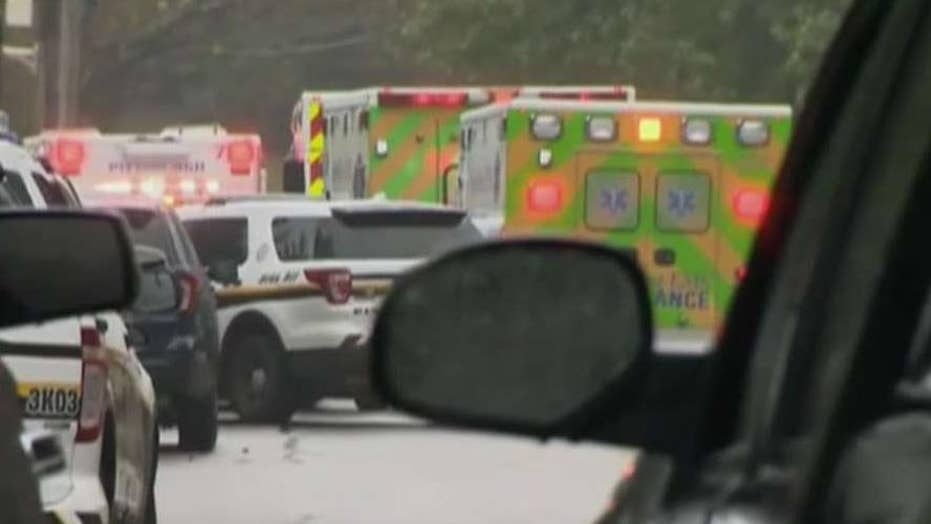 Update on victims of the attack on a Pittsburgh synagogue.

Reportedly shouting “all Jews must die,” a gunman killed 11 people and wounded six others, including four police officers, as a tragic and gruesome crime scene unfolded Saturday at a Pittsburgh synagogue.

FBI special agent Bob Jones, who’s been with the FBI for 22 years, called the scene of the anti-Semitic attacks at the Tree of Life Synagogue “the most horrific crime scene I have seen.”

Robert Bowers, 46, was arrested at the shooting scene after he was wounded and was charged Saturday night with 29 criminal counts.

The attack illustrates the prevalence of anti-Semitism in our country.

Speaking to farmers in Indianapolis, President Trump called for unity following the shooting and labeled the attack "pure evil, hard to believe and frankly something that is unimaginable.” He denounced anti-Semitism unequivocally saying that “there must be no tolerance for anti-Semitism in America.”

At a campaign rally in Illinois, the president addressed the attack and said that "the evil anti-Semitic attack is an assault on all of us.”  He also said it has to be "confronted and condemned everywhere it rears it very ugly head.”

Violence in all forms needs to be confronted and condemned. The problem is that for far too long, anti-Semitism has neither been confronted nor condemned. Instead it’s been ignored.

If nothing else, hopefully this harrowing, monstrous act against an innocent Jewish community opens our eyes as a nation to the reality that anti-Semitism is alive and well in America. We can no longer plead ignorance to its existence.

The Southern Poverty Law Center (SPLC) promotes itself as an advocacy organization that monitors hate groups and extremists. Except the group is more concerned with hate directed at Muslims than at Jews.

When it came to monitoring the extremism and hate that perpetrated more than 1,700 acts of anti-Semitism at American colleges and universities from 2015 to 2017 – crickets from the SPLC.

Likewise, there were crickets from Democrats when Louis Farrakhan made his latest pronouncement of anti-Semitism just last week, comparing Jews to termites.

Facebook took down video of Farrakhan saying: “So when they talk about Farrakhan, call me a hater, call me anti-Semite. Stop it. I’m anti-Termite,” Twitter allowed the anti-Semitic comment to stand and continued giving it a platform.

Violence in all forms needs to be confronted and condemned. The problem is that for far too long, anti-Semitism has neither been confronted nor condemned. Instead it’s been ignored.

If that’s not bad enough no one in the Democratic Party, nor many of our leading media personalities, felt it necessary to condemn Farrakhan’s hate speech.

The Democrats haven’t historically been lining up to stand in solidarity with Israel either. In 2015 when then-House Speaker John Boehner, R-Ohio, invited Israeli Prime Minister Benjamin Netanyahu to speak before Congress, 56 Democrats staged a boycott of his speech.

It’s one thing to note someone’s controversial words and rhetoric, but boycotting Netanyahu’s address to Congress was an action. Actions, as we all know, speak louder than words; words resonate, but actions resonate even more deeply.

These are leaders of the Democratic Party, and they have a track record of not supporting Israel. America, we have a problem.

First lady Melania Trump tweeted: “My heart breaks over the news out of Pittsburgh. The violence needs to stop. May God bless, guide & unite the United States of America.”

Yes, we do need to unite – all races, religions and political persuasions. We all must come together and denounce all hate and violence, toward all groups of people. That includes Jews and that includes the Jewish state of Israel.

Hate has no place in our country. It’s time we all condemn all of it, without prejudice, unequivocally in all forms.