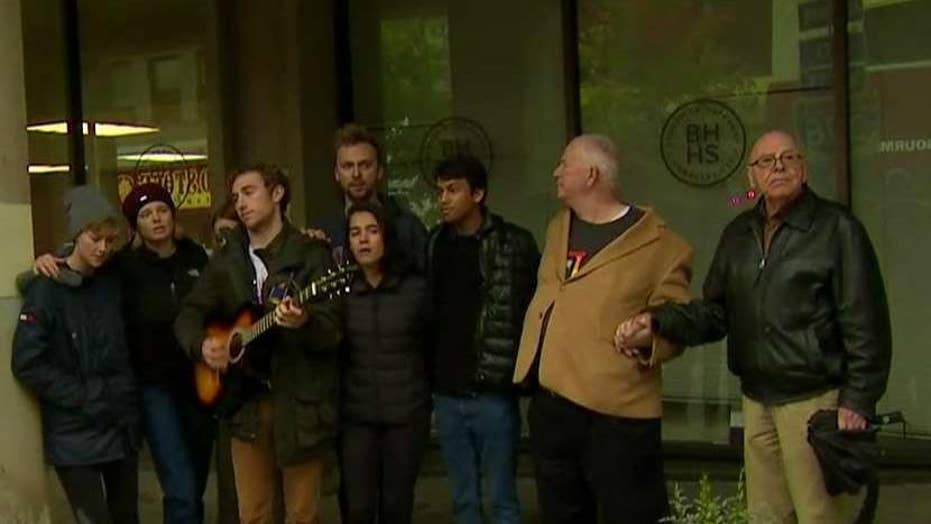 For many years, I attended services to pray at the Tree of Life Synagogue in Pittsburgh, mere blocks from my home. I know the families of some of the 11 people shot and killed at the synagogue Saturday by an anti-Semitic gunman.

Like many, I have been shaken to my core by this harrowing act of terrorism, but also by the immediate politicization of the tragedy in the news media. Despite what you may hear, the motivations of this sick killer lie far deeper than President Trump’s rhetoric or gun control.

Before opening fire, the gunman reportedly declared that “all Jews must die.” This phrase is especially terrifying in light of our people’s macabre history.

The Jewish people have been the victims of oppression since biblical times. Millennia of terror against innocent people came to a climax in the Holocaust, when 6 million Jews – two-thirds of the Jews in Europe – were systematically slaughtered by the Nazis.

My great-grandfathers, who lived in Ukraine, all perished on the battlefields of World War II or in concentration camps. My grandparents and parents faced constant anti-Semitism, even fearing for their lives, while living under the Soviet regime.

Almost all of my Jewish friends can share similar stories about their families. Our people know tragedy almost ubiquitously.

In the immediate reporting after the synagogue massacre Saturday, I heard endless speculation on guns, and listened to partisans eager to highjack this tragedy to further their gun-control agenda.

The Jewish people have been at the receiving end of all sorts of weapons for thousands of years – from knives, swords and arrows in ancient times to guns, bombs and poison gas. Anti-Semitism and murder did not start or end with the assault rifle.

The poison used in Nazi gas chambers – Zyklon B – was created based on research by Fritz Haber, a German Jew and chemist who was a winner of the Nobel Prize. He couldn’t have imagine that the poison gas would be used during World War II to kill his fellow Jews in gas chambers, after Jews were declared enemies of the state.

We have seen anti-Semitism, and xenophobia in general, take root in many nations, with devastating consequences. We are always vigilant and cautious to condemn it at every term.

My great-grandfathers, who lived in Ukraine, all perished on the battlefields of World War II or in concentration camps. My grandparents and parents faced constant anti-Semitism, even fearing for their lives, while living under the Soviet regime.

A few years ago I had the life-changing opportunity of visiting the Auschwitz-Birkenau death camp in Poland. The most striking feature to me was the sheer size of the barracks, stretching for miles. In contrast, the ovens used for burning the bodies were small and could only fit a few at a time.

It is impossible to imagine the extent of hatred and indoctrination required to convince so many Germans, and devote so many resources, to a mass slaughter of these proportions.

In my Jewish Day School in Squirrel Hill, the Pittsburgh neighborhood where the Saturday shooting took place, students collected 6 million pop tabs in order to visualize the loss of 6 million lives. It took students at our school decades to find so many pop tabs; the Nazis killed 6 million Jews in just a few years.

Too often, I’ve heard the terms “Nazis” and “fascists” used to describe political opponents in our country. Some on the left have used the terms to describe President Trump and Republicans. This is absurd.

Real fascism is marked by a suspension of due process; the hijacking of government, media and the collective conscience; and the killing of innocents.

President Trump and the Republicans are not fascists. In fact, the alleged Pittsburgh shooter had explicitly railed against the president due to Trump’s acceptance of Jews.

In Nuremberg in 1935, the Nazis passed their first discriminatory laws against Jews. Some 10 years and 50 million deaths later, the surviving Nazi leadership was put on trial in the same city.

The Nuremberg trials opened with this statement: “Civilization cannot tolerate these crimes being ignored, because it cannot survive their being repeated.”

And yet, genocides, acts of terror and innocent deaths have been repeated since.

Our community prays for an end to the endless cycle of violence, but those prayers won’t be taking place at our beloved synagogue for now, because it has been turned into a crime scene.

Adam Barsouk is a medical student at Thomas Jefferson University in Philadelphia, a researcher at the Hillman Cancer Center and a Young Voices contributor. Follow him on Facebook and Twitter.