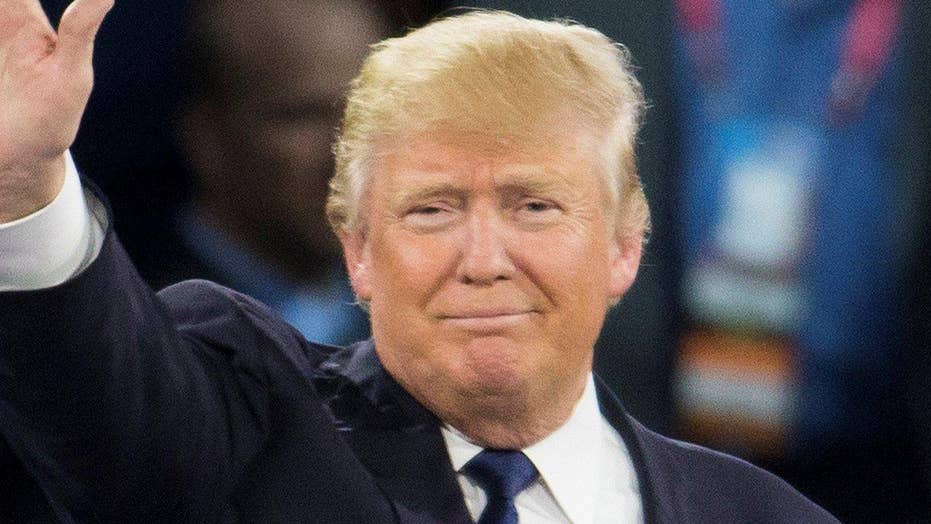 Trump camp: Pausing US entry of migrants is 'common sense'

An ancient Chinese proverb says, “A journey of a thousand miles starts with one step.”

“Team Trump” started a long time ago. The first step began last Spring right here at FoxNews.com with my column celebrating Donald Trump as the “real-life Bullworth” and predicting his raw honesty and political incorrectness would resonate with voters.

Today many months later, millions of Americans have taken their first step and joined “Team Trump.” After the ISIS terror attacks of Tuesday in Belgium, I believe many millions more will see the light. They will realize “the time for political correctness is over.”

But even I was surprised to read bleeding-heart, anti-gun, ultra-liberal British media personality Piers Morgan join Team Trump. That’s a journey of a million miles. That’s a journey even ancient Chinese philosophers could never have seen coming.

I couldn’t believe my eyes when I read Piers Morgan’s UK Daily Mail commentary celebrating Trump titled, “When it comes to terror, isn’t it time we started listening seriously to Trump?”

Has hell frozen over?

Here’s just some of what Morgan wrote after a 40 minute interview on his UK show, “Good Morning Britain”:

Trump told me countries must tighten their borders in light of these terror attacks, especially to anyone related to an ISIS fighter in Syria.

He told me he wants law-abiding Muslims to root out the extremists in their midst, expressing his bafflement and anger that someone like Abdeslam was able to hide for so long in the very part of Brussels he had previously lived.

He told me America must make it far harder for illegal immigrants to enter the U.S. and thinks European countries should follow suit.

He told me he believes there are now areas of many major European cities which have become poisonous breeding grounds for radicalized Islamic terror.

I didn’t feel I was talking to a lunatic, as many seem to view Trump.

I saw a guy, a non-politician unfettered by PC language restraints, who is genuinely furious at the devastation which ISIS is wreaking, and seriously concerned for the security of his fellow Americans and indeed, the citizens of Europe.

Are we witnessing the re-birth of Piers Morgan as a gun-toting conservative patriot? Is Piers’ commentary a sign of a liberal re-awakening on the subject of national security and fighting Islamic terrorists? Certainly the standing ovation Trump received on Monday from Jewish leaders at AIPAC indicates “the times…they are a changing.” I believe Piers may be onto something.

We all learned many things from Tuesday’s tragic terror attack in Belgium.

First, ISIS isn’t “the JV Team.” That comment exposes our president as “the D Team” (as in dunce).

Second, harsh or not, rude or not, offensive or not, Donald Trump is right. The world has a big “Muslim problem.” No, not all Muslims are bad people. Some are good people. But how can we tell the difference? Letting in millions of Muslim migrants or refugees is a recipe for disaster and tragedy.

Third, Trump was correct to identify America’s open borders as the single biggest issue of 2016. A country without borders is not a country. Because of his unique understanding of this one issue, Trump has destroyed the GOP establishment and is on the doorstep of pulling off one of the greatest upsets in American political history.

Fourth, even ultra-liberals like Piers Morgan are suddenly awakening to the fact that political correctness will get us all killed. Bravo Piers.

Fifth, many world leaders are important. Barack Obama is impotent.

Obama spent the day of the tragic terror attack hanging out with communist tyrant Raul Castro, smiling, waving and doing “the wave” at a Cuban baseball game. He refused to cut his vacation short even over a global tragedy. He refused to blame radical Islam. Obama is fiddling while the world burns, afraid to offend his Muslim friends in high places, even as radical Islamic terrorists murder and maim countless innocent people in the name of the Koran.

Trump’s strategy is certainly harsh and offensive, but it keeps our children safe at night. The liberal strategy is kinder, gentler, less harsh, more humane, more PC- and guarantees some Americans will die.

I’m not willing to take that chance with my children. Are you?

And to Piers Morgan I say, “Congratulations and welcome to Team Trump. Better late than never.”