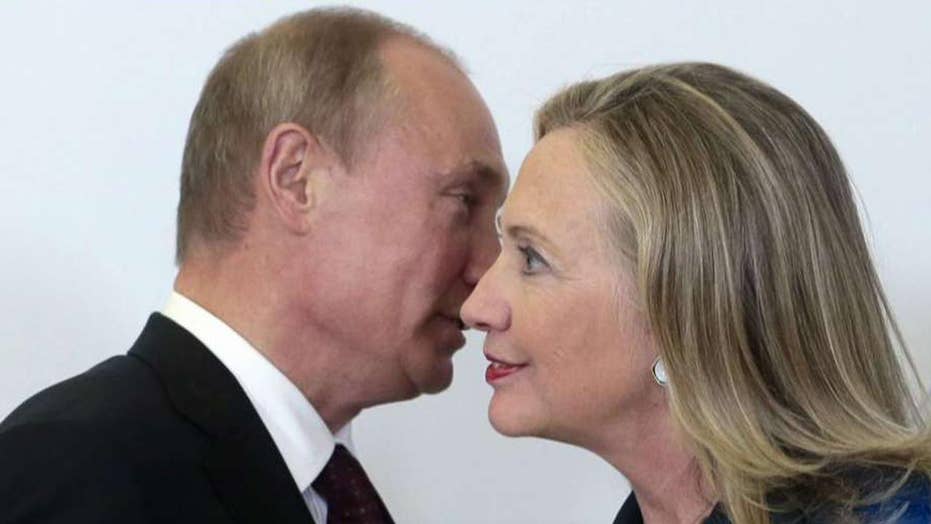 Peter Schweizer on the Clintons' long history with Russia

Many of those sounding the loudest alarm bells over Russian influence in U.S. politics were curiously silent when far greater concerns were raised about the Clintons.

Investigating the business ties between Russia and those in President Donald Trump’s orbit is a legitimate exercise. One-time Trump campaign chairman Paul Manafort was an advisor to the pro-Russian Ukrainian president. Former Trump advisor Carter Page had energy deals involving Russian companies. Former National Security Advisor General Michael Flynn gave a nicely paid speech in Moscow as a private citizen and was less than complete in explaining his conversations with Russian officials. And then there is the simple fact that Attorney General (former senator) Jeff Session, while a member of the Senate Armed Services Committee, communicated with the Russian Ambassador—something senators do fairly regularly.

Examining these relationships is worth doing. Still, those pushing the narrative of troubling ties to Russia lose all credibility by wholly ignoring the far deeper and more troubling relationships the Clintons and their closest aides have maintained with Russian government officials for years, including while they were in public office. Unlike the revelations so far concerning Russian ties in the Trump camp, the Clinton deals involved hundreds of millions of dollars and enormous favors that benefitted Russian interests.

Bill and Hillary Clinton received large sums of money directly and indirectly from Russian officials while Hillary Clinton was Secretary of State.  Bill Clinton was paid a cool $500,000 (well above his normal fee) for a speech in Moscow in 2010.  Who footed the bill?  An investment firm in Moscow called Renaissance Capital, which boasts deep ties to Russian intelligence.  The Clinton Foundation itself took money from Russian officials and Putin-connected oligarchs.  They also took donations from:

Then there is the glaring fact that the Clinton Foundation also scored $145 million in donations from nine shareholders in a Canadian uranium company called Uranium One that was sold to the Russian government in 2010. The deal required the approval of several federal government agencies, including Hillary Clinton’s State Department. The deal allowed Rosatom, the Russian State Nuclear Agency, to buy assets that amounted to 20 percent of American uranium.  Rosatom, by the way controls the Russian nuclear arsenal.

Equally troubling: some of those donations were hidden and not disclosed by the Clintons. President Obama required the Clinton Foundation to disclose all contributions as a condition of Hillary Clinton becoming Secretary of State. But that did not happen. The only reason the hidden donations ever came to light is because we uncovered them by combing through Canadian tax records.

Everyone got what they wanted in this deal: the uranium investors made a nice profit; the Russians acquired a strategic asset; and the Clinton Foundation bagged a lot of money.

Hillary Clinton says she was not involved in the decision to approve the sale of Uranium One.  As proof, the Clinton campaign in 2015 trotted out her former aide, Assistant Secretary of State Fernandez, to say publicly that we should take his word for it that she was not involved in approving that deal. But as we now know from the leaked Podesta emails, Fernandez was all too eager to help Podesta kill the story, while getting other favors from Podesta.  That raises questions about the veracity of his comments.

It seems strange that while some in Congress are eager to investigate the activities of General Mike Flynn and his contacts with Russia, they have no interest in looking into a transaction in which the Clinton Foundation received a staggering $145 million. It’s that kind of inconsistency that saps all credibility from those raising these issues.

Beyond the Clintons themselves, there is also the troubling case of one of their closest aides, John Podesta. He served as Hillary Clinton’s 2016 campaign chairman. Podesta didn’t just have conversations with Russian officials. He went into business with the Russian government while he was advising Hillary Clinton as Secretary of State.

In 2011, John Podesta joined the executive board of a small energy company called Joule Unlimited.  Two months after he joined the board, the Russian government invested one billion rubles (approximately $35 million) into the company. The money came from a Russian government investment fund called Rusnano. What is Rusnano? It is a fund started in 2007 by Vladimir Putin and has been described by Russian Education and Science Minister Andrei Fursenko as “Putin’s Child.”

According to State Department cables leaked via Wikileaks, technology venture funds like Rusnano were considered a national security concern by U.S. officials because they could serve a “dual use” in their investments. That is, their investments in civilian technologies could have a military application.

In short, John Podesta was business partners with the Russian government and Vladimir Putin.  When John Podesta went to the White House in January 2014 to serve as counselor to President Obama, he failed to disclose his board membership in one of the Joule entities on his financial disclosure form. According to the Podesta emails, Podesta transferred his 75,000 shares in the company to an LLC controlled by his family. But as the Wall Street Journal notes, the Podesta emails reveal he remained actively engaged in company business after that fact.

None of the individuals in Trump’s orbit who have Russian ties—Paul Manafort, Carter Page, and General Mike Flynn—are serving in the Trump White House. Had Hillary Clinton won the presidency, John Podesta would certainly have played a central role. Would the same people who are currently sounding the alarm bells about Russian influence in American politics have cared? I doubt it.