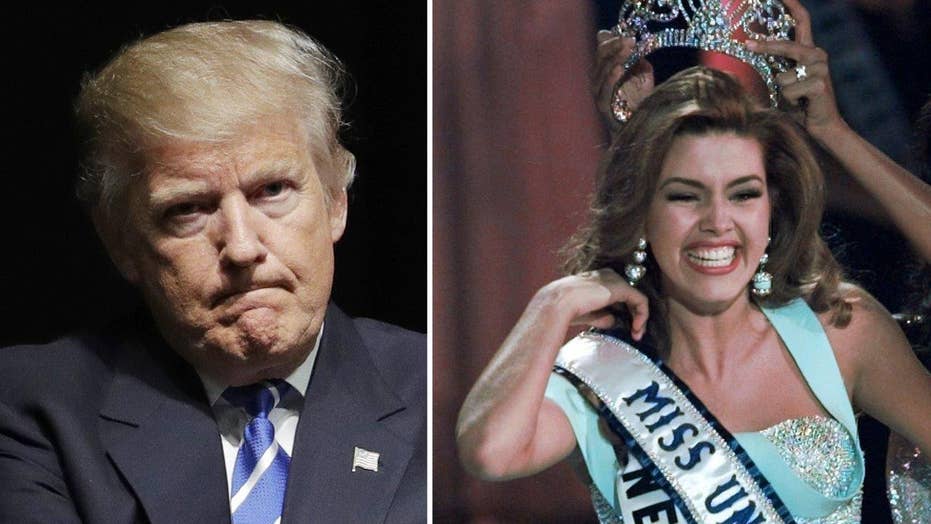 At Monday’s presidential debate Hillary Clinton’s asserted that Alicia Machado, a former Miss Universe, was victimized about her weight by Donald Trump. Her remarks have, perhaps rightfully, given some women pause.  So let’s reflect a moment and add some context to this allegation.  Here’s where I’ve come down.

Like many young girls of my era, I grew up watching the Miss America Pageant.  My friends and I would get together, root for the young woman from our state, or pick another favorite if she didn’t make the top ten.

We held our breath as some of them struggled to answer the interview question and discussed our own answers regarding world peace.  We clapped for the pianist and giggled at the fiery baton twirler.  It was reality TV before reality TV.  And who knew that years later I would be friends with some of those same young women as they went on to have laudable careers in law and broadcasting. The women I know were then, and remain today, smart and gifted women of noble character.

Fast forward to today, and somewhere along the way pageants fell out of favor.  Perhaps it was second wave feminism of the 60s and 70s, or perhaps we just got bored with them.  Regardless, in 2004, the ABC television network dropped the show’s coverage due to record low ratings, but CMT picked it up, and there remains a smaller following.  Most of us were done with Miss America.  However, her more racy sisters, Miss USA and co-owned Miss Universe were, by this time, split off and vying for our attention.

Of course, there are some smart, talented women who have chosen to participate in the Miss USA and Miss Universe pageants, but let’s be honest, it’s not why they win.

Unlike Miss America, these pageants make no pretense of being anything more than a “beauty” pageant.  They have no talent competition and award no scholarships.

In fact, according to Bustle.com, the entire reason for the split was because Miss America 1951 Yolande Belbeze refused to be photographed for a newspaper wearing a swimsuit.  One of the show’s sponsors, Catalina swimwear, retaliated by creating its own show and, thus, we have Miss USA and Miss Universe.

Of course, there are some smart, talented women who have chosen to participate in the Miss USA and Miss Universe pageants, but let’s be honest, it’s not why they win.

The women who participate voluntarily don a bikini and walk in front of judges to be, well, judged.

The participants are competing for a job based on their bodies and good looks.

Their worth is based almost solely upon those things and, for one year, they are to represent the company with the asset of conventional beauty.  Not brains, not talent, just beauty.  Quite literally, their bodies are their money makers.

Here’s a little known fact, even the U.S government recognizes this arrangement.  I am told by friends who have modeled that they are able to write off of their taxes anything they do to keep their assets looking good. All the things women spend money on — hair, makeup, gym memberships, and even Botox — is a write off.  Even Uncle Sam gets the joke. Their bodies are their small businesses I suppose.

So here’s the deal. Logically, I can’t get to victim when I think of Alicia Machado.  Name calling is never nice, and — shocker! — Donald Trump isn’t diplomatic in giving criticism.

Here’s the irony.  Regardless of how much Hillary Clinton wants Ms. Machado to be the poster child for misused women, she doesn’t fit the narrative.  Let’s be honest, a woman who voluntarily puts on a bikini and literally asks people to judge her based almost solely on her body can’t be mad when they do.

Ms. Machado was being paid to look perfect, and when she couldn’t -- or wouldn’t -- live up to the standard she had asked to be measured by, she caught criticism.

Maybe she’s also smart and kind.  Who knows? But that was not why she was chosen to serve as Miss Universe for one year.

At this point in my life, I feel conflicted about pageants.  Women I love have done them and will do them.  CWA’s Young Women for America boasts more than one pageant winner.

As logical women, however, we can’t pretend that Alicia Machado was misused.  There are millions of women across this nation who are objectified, abused victims of sexism and misogyny.  Let’s work to protect them, instead of inventing new ones.