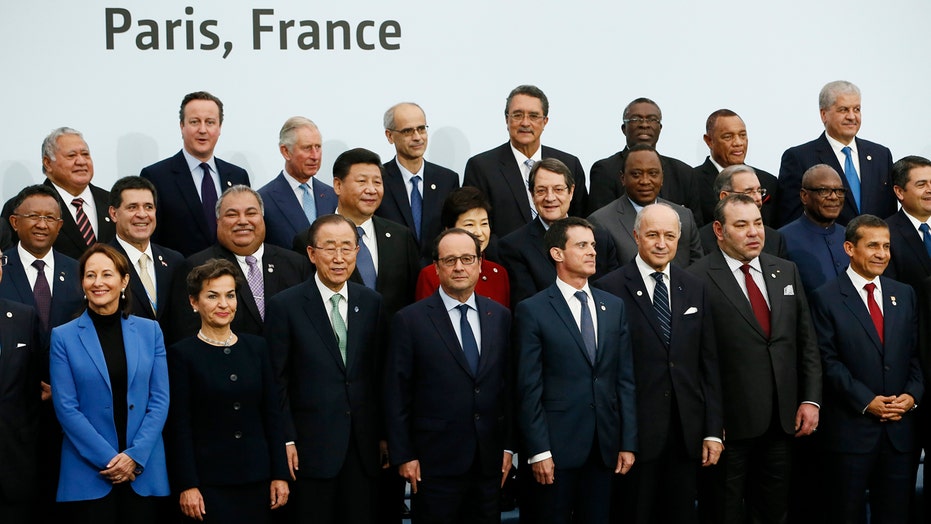 Highly anticipated international climate negotiations began Monday in Paris, aiming to finalize commitments from all countries to reduce their greenhouse-gas emissions. Countries submitted in advance their final plans (known as “Intended Nationally Determined Contributions,” or INDCs), which means the potential progress from a global agreement can be estimated already.

Unfortunately, though claims of success are already pouring in, the best estimate for that progress is approximately zero.

Here’s how we know. Any improvement must start from a baseline: what emissions and warming were expected before the INDCs? A projection created in 2000 by the United Nations’ Intergovernmental Panel on Climate Change (IPCC), called “A1B,” serves this purpose well. It was designed long before the INDC process began, and  scientists worldwide use it as a baseline, as did the U.S. government in its 2014 “National Climate Assessment.”

Under the A1B scenario, different computerized climate models produces varying estimates for how much warming would occur by 2100. The IPCC reports 3.3 degrees Celsius. Other widely-used models produce estimates of 3.4 to 3.8 degrees.

Global progress on climate change depends on developing countries taking costly action to reduce future emissions, yet in Paris they are promising not to. That makes any agreement signed at the conference a bad deal for the few countries, like the U.S., that are making serious commitments.

How do the INDC commitments change the picture? Climate Interactive, a partner of the U.S. State Department, calculates that warming by 2100 would be 3.5 degree Celsius. The U.N. Environment Program agrees.

That’s right: forecasts using the acclaimed greenhouse gas commitments are in exactly the same range as what prior analyses, without the commitments, expected anyway.

The Massachusetts Institute of Technology, using a different approach, reached the same conclusion. Their in-house model found the INDCs reduced warming in 2100 by only 0.2 degrees Celsius. For reference, 2011 was about 0.12 degrees cooler than 2010; 2015 is on pace to be 0.13 degrees warmer than 2014.

To understand how the world’s pledges can amount to essentially nothing, look at what developing countries—who will account for four-fifths of emissions this century—have offered.

China committed its emissions will peak “around 2030.” OK, but the federal government’s Lawrence Berkeley National Laboratory suggested four years ago that China was already on pace to do just that.

China also committed to reducing its “carbon intensity” (CO2 emissions per dollar of GDP) by 60-to-65 per cent in 2030, as compared to 2005. But Bloomberg New Energy Finance found that less ambitious than China’s business-as-usual course.

India refused to make any emissions commitment and offered only a 33- to-35 per cent reduction in carbon intensity. This would represent a slowing of recent progress—and a 2030 goal right where the country’s Centre for Policy Research expected the country to be regardless.

Continuing down the list of most populous developing countries:  Brazil offered to cut emissions 37 per cent from 2005 levels by 2025, but its emissions (historically driven by deforestation, not energy use) are already down 41 percent since 2005.

Pakistan, after missing every deadline, submitted a single page in mid-November making no commitments at all. Indonesia’s plan is too vague to assess. Nigeria’s submission came less than 48 hours before the start of talks, precluding even a cursory assessment.

Nevertheless, a full-court press is underway to claim historic progress.

Organizations like Climate Action Tracker and the above-mentioned Climate Interactive are manufacturing analyses—using worst-case warming estimates against which the commitments seem impressive, or counting on hypothetical future agreements—to create the perception of success where none has been achieved.

Over the coming two weeks of talks, expect constant reports of ambitious commitments and important progress. Already, the New York Times is reporting that, “Without the pledges, global temperatures would likely jump more than 8°F [4.5°C] by 2100.”

That is false. The 8-degree number comes from a hypothetical scenario created by the IPCC for use by climate modelers, which, it explicitly states “has higher emissions than all but a few published baseline scenarios.”

Global progress on climate change depends on developing countries taking costly action to reduce future emissions, yet in Paris they are promising not to.

That makes any agreement signed at the conference a bad deal for the few countries, like the U.S., that are making serious commitments. And it’s a bad deal for climate activists, who want meaningful change but will get empty platitudes instead.

Only the politicians, applauding loudly for one another, stand to gain.

Oren Cass is a senior fellow at the Manhattan Institute for Policy Research.