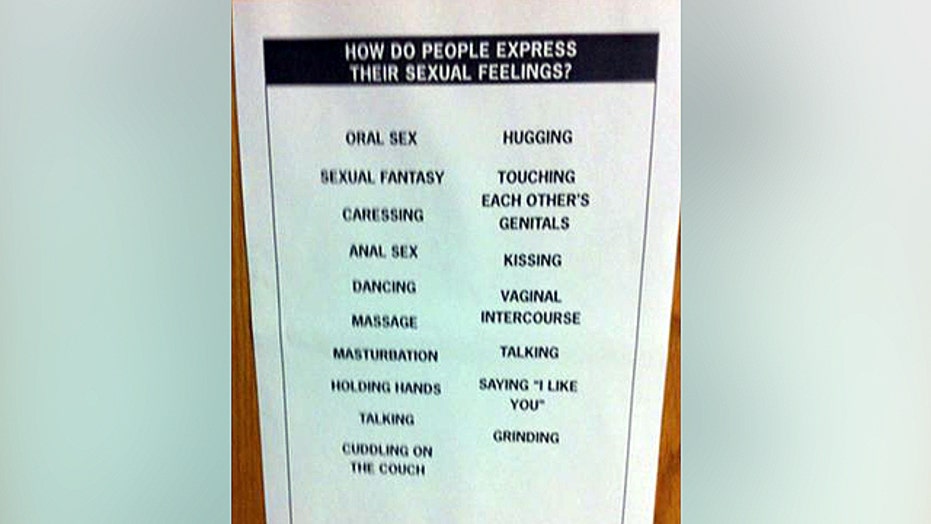 Ellis’ daughter is an eighth grade student at Hocker Grove Middle School in the Shawnee Mission School District. Last week, she came home from school and showed her parents a photograph she had taken of a poster on a classroom door.

Ellis told me the sexual acts listed on the poster were “outrageous for 13-year-old children.”

“I looked at my wife, we looked at each other and I was hoping it was a prank a student had pulled,” he said.

On Monday, Ellis discovered that not only was the poster legitimate, it was also part of the approved curriculum at the middle school.

“It makes me wonder what our country has come to when kids get something like this thrown in front of them,” he said.

Ellis spoke at length with the principal and another school district official who went to great lengths to defend the sex poster. Since the district failed to see the problem, he decided to contact the Fox television affiliate in Kansas City.

District spokesperson Leigh Anne Neal told Fox 4 News the poster is part of their abstinence-based health curriculum. However, she said, the poster needed to be viewed in the context of a bigger curriculum.

“The poster that you reference is actually part of our middle school health and science materials, and so it is a part of our district approved curriculum,” Neal told the television station. “However, the item is meant to be part of a lesson, and so certainly as a standalone poster without the context of a teacher-led discussion, I could see that there might be some cause for concern.”

Now right about now, I suspect a lot of moms and dads are breathing a sigh of relief because they don’t live in Shawnee. But you might want to pay close attention to the next paragraph.

Neal said their approved curriculum is in line with what other schools around the country do.

“The curriculum it is a part of, it aligns with national standards around those topics, and it’s part of our curriculum in the school district,” she told the television station.

Ellis told me if that’s true, then the curriculum needs to be changed.

“I can’t believe this is something they were teaching,” he said. “I couldn’t believe something like that was going on in school.”

It was even more shocking because Ellis said he and his wife are actively involved in their daughter’s education.

“We try to instill in our daughter that sex is for marriage,” he said. “In years past the school has sent home a permission slip on sex education issues. And in years past we said no. That’s something we need to take care of at home. This year there was no permission slip.”

Ellis told me it’s time for parents to take an aggressive interest in what’s happening in public schools.

“A lot of parents view the school as a babysitter,” he said. “My message is to stand up. Let’s take charge of our kids. There are so many out of control kids in the nation.”

It’s the parent’s job to parent, not the schools, Mr. Ellis said.

And no matter what the professional educators are saying, that poster had nothing to do with abstinence, he said.

“Children get so much of this in the music, on television, in magazines,” he said. ‘I think the school should be the one place we can send our kids and not have to worry about them being bombarded with something like this.”

Welcome to the 21st Century – where the R’s of education stand for reading, writing and raunchy.