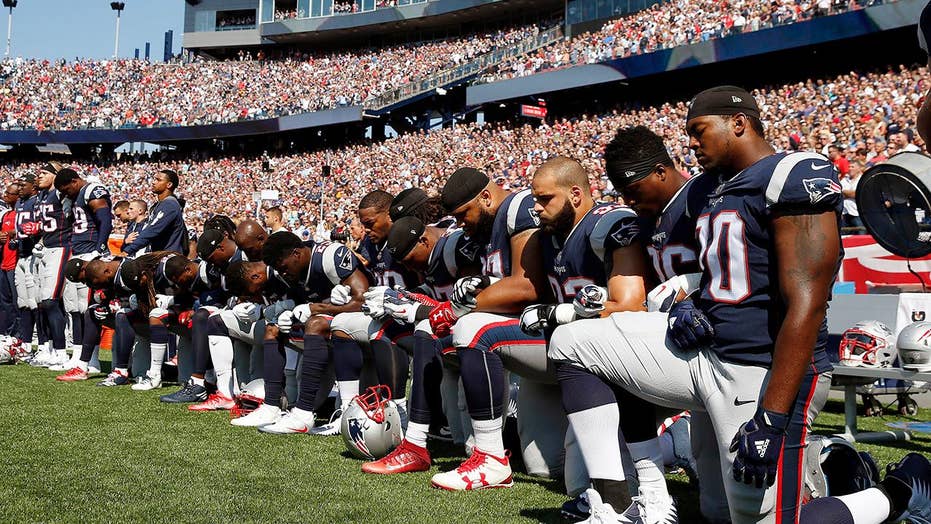 For generations, our national anthem has been a source of unity and pride for the American people. It has consistently remained above the fray of political rancor – until last year, when it turned into a symbol of protest and division on the football field.

Protests reached a new height Sunday, when NFL players kneeled, stood with locked arms, or remained in their locker rooms while “The Star-Spangled Banner” was sung in stadiums from coast to coast.

What began as a gesture to protest police violence against minorities by San Francisco 49ers quarterback Colin Kaepernick in August 2016 erupted Sunday into a widespread protest of President Trump’s demand that NFL owners “fire or suspend” players who kneel when our anthem is played.

Americans have always had and always will have disagreements on policy and other matters. Thankfully, we have the freedom to engage in healthy debate and protests over those disagreements.

But we erode the bonds of our country if we fail to find some common ground – some anchor point – where we can stand united as Americans. Our national anthem and respect for our great country – even with its failings – should still be one of those places of commonality.

The performance of our anthem does not endorse America’s flaws. It directs hearts to an ideal.

Although listening to the national anthem countless times over my life, only a few of those moments created such emotion that words failed and tears flowed.

The first took place when the Coldstream Guards performed our anthem outside Buckingham Palace following the Sept. 11, 2001 terrorist attacks. Watching on TV, I was moved to see a nation we battled long ago in two bitterly fought wars – including the war that inspired the anthem – standing with us in solidarity as our country mourned.

The blood we spilled as allies on the battlefields of two world wars and countless other engagements formed a bond between the United States and Britain that resonated in the performance of our anthem in London during that dark day following the Sept. 11 attacks.

Another time of deep emotion arose when my wife performed the anthem at the dedication of the amputee training center at Walter Reed Army Medical Center in Washington. Watching her standing on her own prosthetic limbs beside decorated military personnel, my eyes filled with tears as I gazed at the service men and women around her, standing on their own prostheses in a somber but resolute tribute to our country.

Some of these brave patriots who were unable to stand sat at attention in their wheelchairs with all the dignity of those able to rise. No heart present escaped unmoved from experiencing these American heroes with savage wounds echoing their devotion through the anthem. They certainly would have all stood for “The Star-Spangled Banner” if only they could.

On the parade ground at the United States Military Academy at West Point, I experienced another moment of emotion as our anthem was played. Our son stood at attention and proudly saluted the flag wearing the uniform he had spent a lifetime pursuing.

It would be the last time I witnessed him wearing the uniform. A severe knee injury cost him his military career. Yet, although too briefly, he stood in the long gray line while the band played and the breeze from the Hudson River caused the American flag to flutter.

Now, tears fill my eyes again when hearing our national anthem – but for a much different reason. What endured as a solemn event for all Americans now serves as an opportunity to inject dissension and disunity.

For a precious few moments before sporting events and ceremonies, the stirring words “the land of the free and the home of the brave” have long served as a rallying cry that pointed Americans and the world to a better ideal.

Previously infusing unity into a nation, the time-honored tradition of playing our anthem is now being used to assert divisiveness. A hymn with staggering texture and history now rings with discord and dissonance.

If America submits itself to mentoring from the past, ample evidence demonstrates that voices raised in unison towards an ideal accomplish far greater things than fists raised in rage.

“The home of the brave” became so because of our choice to fight as a unified nation. That unity did not grow from hating those in front of us, but flourished because we so deeply loved those behind and beside us.

The next generation of Americans relies on us today to meld together with respect and courage. Those values remain essential as our country faces perhaps our greatest threat: the specter of disdain for the idea of America.

Peter Rosenberger is the host of a weekly national radio program, HOPE FOR THE CAREGIVER.  For more than 34 years, he’s cared for his wife, Gracie, who lives with severe disabilities. She’s fully recovered from the COVID-19 virus. www.hopeforthecaregiver.com @hope4caregiver