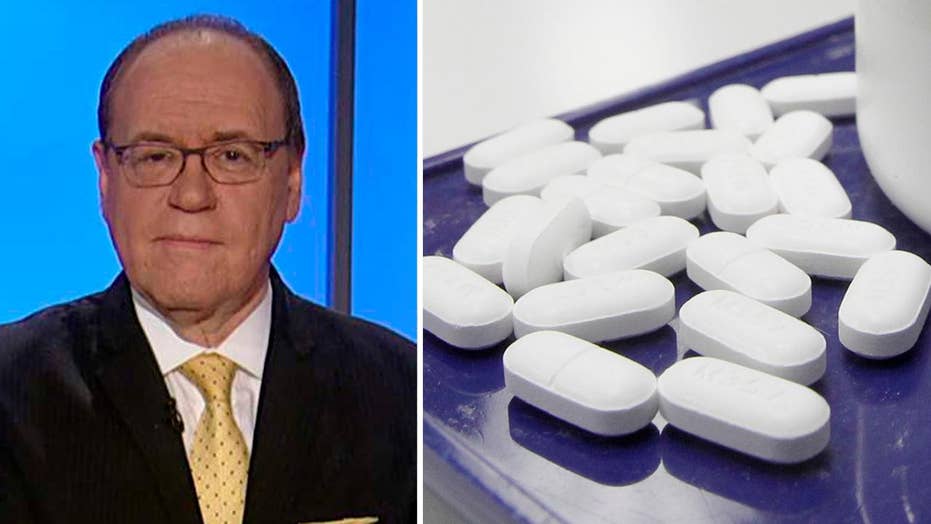 Dr. Siegel: Docs need to be educated on pain prescriptions

President Trump, in his briefing on the opioid crisis on Tuesday, pointed out that opioid overdose is now the leading cause of accidental death in the U.S., killing more than 33,000 people in 2015 alone. And he expressed his concern that no one in America is safe.

In fact, more than 20,000 of those deaths were related to prescription pain relievers.

Tablets of the opioid-based Hydrocodone at a pharmacy in Portsmouth, Ohio, June 21, 2017. REUTERS/Bryan Woolston - RTS18A6Z (REUTERS)

Excessive prescriptions and the doctors who prescribe them are at the heart of the problem. According to the National Institute on Drug Abuse, four out of five heroin addicts started with prescription opioids.

The problem varies from state to state. In 2015, the CDC reported, the five states with the highest rates of overdose deaths were West Virginia, New Hampshire, Kentucky, Ohio and Rhode Island.

And the problem is even worse than we thought. According to a study just released by the University of Virginia, there are 24 percent more deaths from opioids than are reported.

Since opioids suppress breathing, and since patients who become habituated need more and more of the drug to achieve the same effect, it isn’t surprising that the overdose rate is directly tied to the number of prescriptions. According to the CDC, 259 million prescriptions were written in 2012, more than enough to give everyone in America a bottle of pills.

So what to do? How can we overcome this crisis?

“The best way to prevent drug addiction and overdose is to prevent people from abusing drugs in the first place,” Trump said. “If they don’t start, they won’t have a problem. If they do start, it’s awfully tough to get off.”

As Health and Human Services Secretary Dr. Tom Price pointed out, the issue must be addressed in terms of prevention, treatment and recovery.

We need to begin in the doctor’s office, where almost half of opioid prescriptions are written by primary care physicians rather than neurologists or pain specialists.

We need more education. Is your back pain a muscle spasm that can be treated with muscle relaxants, physical therapy, acupuncture or chiropractic? If you just had surgery, how can your surgeon best control your pain? And if you are given an opioid, are you prescribed it for too long? I just took a New York State-mandated course on pain management, palliative care and addiction, and I found it helpful and informative in terms of the danger of opioid overuse.

As Food and Drug Administration Commissioner Dr. Scott Gottlieb told me in a recent interview for Fox News, we need to make sure that when patients are “prescribed opioids, it's for a duration that comports with why they received the prescription in the first place.

“So if you're getting a dental procedure, should that be a 30-day supply? Probably not. I can't think of why you'd need a 30-day supply for a tooth extraction. That should probably be a two- or four-day supply. And so there are things we can do to try to affect how drugs are prescribed and how they're dispensed to make sure we're reducing the overall exposure. We know that if we can reduce overall exposure to opioids, we can also reduce the rate of addiction. It's simple math."

Outside the doctor’s office, strengthening border security can help clamp down on the illicit drug trade, and prosecuting drug traffickers, as the president suggests, can have a big impact.

But my focus as a physician is still on restricting prescriptions and treating addicts, which I believe is the most effective approach. In fact, a National Institutes of Health study published in the Journal of the American Medical Association in 2009 concluded that treating the addiction that led to the criminal behavior not only improved public health, but also reduced criminality.

Further, in 2010, the National Center of Addiction and Substance Abuse at Columbia University reported that while 65 percent of U.S. inmates met criteria for substance abuse addiction, only 11 percent received treatment.

So locking up addicts is definitely not the best path to curing them.

We need more treatment programs for addicts, and more drugs like naloxone to treat overdoses and suboxone to help them quit. New targeted drugs are in the pipeline both to treat pain without addiction and to treat addiction more effectively when it occurs.

Scientists are working hard in the laboratory, and the FDA and DEA are working in the field to try to control the opioid epidemic. But for their efforts to work, we doctors must think carefully each time we write a prescription for pain.