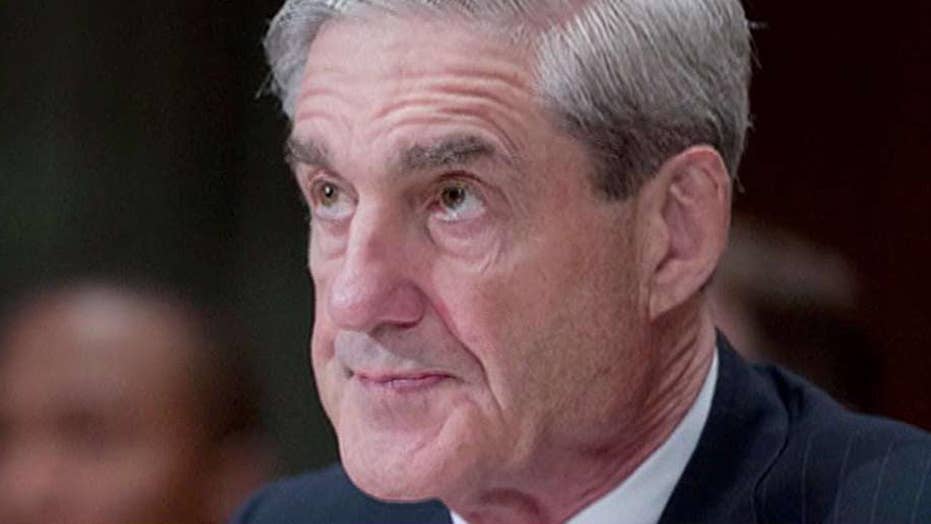 Appointment of Mueller, one year later

One year ago Thursday,  Deputy Attorney General Rod Rosenstein dove down a rabbit hole by appointing Robert Mueller as a special counsel to look into Russian interference in the 2016 presidential election and possible collusion between President Trump’s campaign and the Russian government.

Specifically, Rosenstein’s order directed the special counsel to look into “any links between the Russian government and individuals associated with the campaign of President Donald Trump,” any “matters that arose or may arise directly from the investigations” and “any other matters within the scope” of the Code of Federal Regulations applicable to the special counsel.

In other words, Rosenstein launched a free-for-all.

Exactly 365 days later, where are we?

Operating on a budget of $10 million in taxpayer funds, Mueller and his team have conducted thousands of hours of interviews and collected millions of documents.

Mueller has indicted one allegedly corrupt lobbyist, Paul Manafort, who has been charged with tax evasion and money laundering in connection to his work for shady Ukrainian politicians carried on years before he briefly went to work as chairman of the Trump presidential campaign.

To date, there has been no indication that the Trump campaign – and certainly not the president – had anything to do with Russia’s efforts to meddle in our election process. That Russia did indeed interfere with the U.S. presidential race seems certain.

The Russians spewed false propaganda, as Moscow has done in the past, and leaked harmful communications to discredit Hillary Clinton. Why? Because Russian President Vladimir Putin was angry with Clinton for calling his election in Russia “rigged,” and decided that two could play that game.

Over the past year, the cost of the Mueller investigation has gone way beyond the expenditure of taxpayer money. It has cast a cloud over the Trump presidency, allowing his opponents to press their no-holds-barred opposition with righteous zeal.

The millions of Americans who protested his win were energized in part by the completely unsubstantiated notion that President Trump had cheated, depriving Clinton of her rightful time at bat.

Ironic, really, because the only cheating we actually know about for sure came from Hillary Clinton’s camp, which engaged in nefarious and unfair activities aimed to hurt rival Bernie Sanders in the race for the Democratic presidential nomination.

Also, the only politically nefarious contact with Russian operatives that we know of was carried out by Fusion GPS. That purveyor of opposition research was acting on behalf of Clinton’s campaign when it charged Christopher Steele with digging up dirt on Donald Trump. Steele excelled at the task by assembling the now infamous dossier, with the apparent help of Putin’s minions.

The cost of the special counsel’s probe also includes a major hit to the reputation of the FBI and the Justice Department, which has shown itself to have behaved in a partisan and possibly illegal manner.

The cost of the special counsel’s probe also includes a major hit to the reputation of the FBI and the Justice Department, which has shown itself to have behaved in a partisan and possibly illegal manner.

Not only did those organizations apparently rely on the Steele dossier – which fired FBI Director James Comey has described as “unverified” – to get permission to spy on Trump campaign workers; they also appear to have set up former Trump National Security Adviser Michael Flynn, who was charged with lying to the FBI.

There are also indications that President Obama, who micromanaged every aspect of his government, may have even weaponized those institutions to undermine a political rival. If true, this is a low point in our history and our democracy.

Another cost is the further rending of the country into two camps. Democrats are convinced that only skullduggery could account for President Trump’s victory and want Mueller to prove collusion; Republicans think the investigation is, to quote the president, a “witch hunt.”

Interestingly, and maybe not surprisingly, voters from both sides of the aisle are losing interest and confidence in Mueller’s inquiry. A recent Monmouth University poll showed that 54 percent of voters support continuing the investigation, a drop from 60 percent in March. Some 43 percent said the investigation should end, compared with 37 percent two months ago.

Meanwhile, an NPR/PBS/Marist poll a few weeks ago found that 45 percent of voters believe the special counsel is overseeing a “fair” investigation, several points lower than in previous readings. That survey also showed that only 16 percent of Republicans and 35 percent of independents view Mueller favorably – figures that are quickly dropping.

Trump backers see a double standard. Supporters resent the seeming indifference of the Justice Department to Clinton’s possible misdeeds, such as her involvement in the sale of Uranium One and her lying about her using a personal server to transmit classified information. They think Clinton got off lightly, courtesy of Comey’s kid glove treatment, while President Trump has been hounded for months for offenses yet to be identified.

The good news is that the country is moving forward. If the purpose of this endless, far-reaching investigation into all things Trump was to undermine his presidency, as some charge, that effort is failing.

President Trump’s approval ratings are rising (now at 48 percent according to Reuters/Ipsos), and Americans are more upbeat about the direction of the country. The economy is humming, and increasingly voters are crediting President Trump with the acceleration in growth and in job openings.

Still, the liberal media stick limpet-like to the Mueller probe, sapping the rising optimism and diverting resources from the work of the people. The investigation is achieving just what Moscow aspired to create: discord and distraction.

During his self-promoting book tour, Comey said that after a year, an investigator should have a good idea of where he is going, or he should be fired. The year is up, Special Counsel Mueller. Time to show your cards, or call it a day. The only winner here so far is Vladimir Putin.