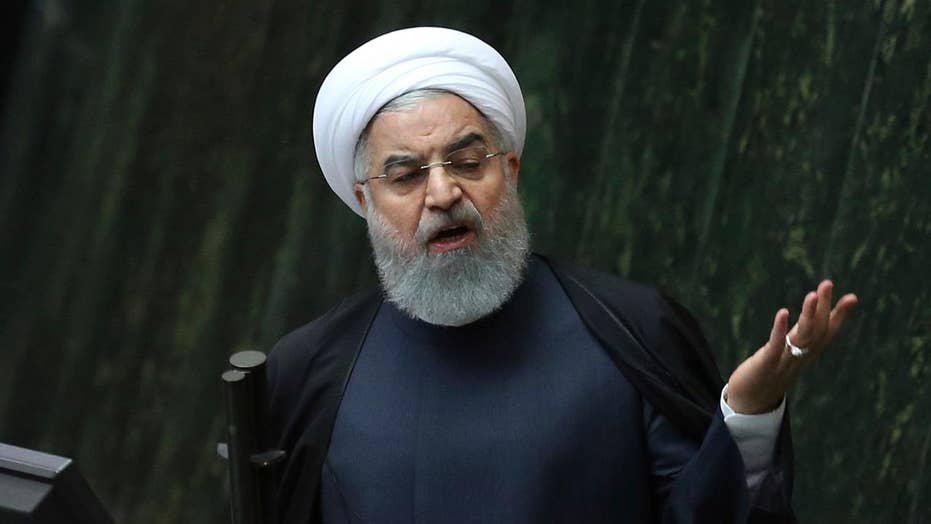 At what cost was the nuclear deal with Iran reached?

A bombshell report from Politico alleges the Obama administration, in an effort to reach a deal, sabotaged its own efforts to interdict cocaine shipments into the U.S. by Hezbollah; Doug McKelway goes in-depth for 'Special Report.'

The Trump Administration’s just released National Security Strategy properly identifies Iran as among the important challengers to U.S. security interests but does not offer a concrete strategy on how to counter its growing regional hegemony. Indeed, Iran’s geopolitical ascent is the most significant, and dangerous, development in the Middle East this century. President Trump should follow Ronald Reagan’s example and take the offensive, supporting indigenous forces that oppose, and seek independence from, Iranian domination. This requires eschewing convention and recognizing Syria, Iraq, Lebanon and Yemen for what they are: failed, artificial constructs whose capitals now serve as Iranian satrapies.

Iran has taken advantage of ISIS’ crumbling caliphate to increasingly consolidate control over Syria and Iran, as it dominates their capitals and those of Lebanon and Yemen. It has effectively established a land bridge from Tehran to Beirut.

Reversing this strategic threat requires continued U.S. military presence and military aid to local forces in Syria and Iraq, and greater support for our regional allies, such as Israel and Jordan, who must contain the provocative actions of Iran and its proxies. But this defensive posture will not suffice even to contain Iran let alone transform its hegemonic trajectory.

Instead, we should draw from Ronald Reagan, who eschewed a defensive posture and pursued an offensive strategy to undermine the Soviet Union that included supporting indigenous anti-communist insurgents around the globe. We should pursue the same offensive strategy to roll back Iran’s regional hegemony.

We should recognize that maintaining Syria, Iraq, Lebanon and Yemen in their existing forms is unnatural and serves Iran’s interests. There is nothing sacred about these countries’ borders, which seem to have been drawn by a drunk and blindfolded cartographer. Indeed, in totally disregarding these borders, ISIS and Iran both have already demonstrated their anachronism and irrelevance.

These countries are not nation-states as Americans understand them but post-WWI artificial constructs, mostly created out of the ashes of the Ottoman Empire in a colossally failed experiment by international leaders. With their deep ethno-sectarian fissures, these countries have either been held together by a strong authoritarian hand or suffered sectarian carnage.

Indeed, the principal vulnerability of Iran’s regional strategy is its dependence on brutal regimes to rule lands riven by ethno-sectarian fissures. The United States should exploit this vulnerability by supporting those forces in Syria, Iraq, Lebanon and Yemen that oppose Iran’s domination and seek greater self-determination or independence from the capitals. The result could be transforming these failed states into loose confederations or new countries with more borders that more naturally conform along sectarian lines.

Any redrawing of political relationships or borders is highly complex, and the United States cannot dictate the outcomes. But we can influence them. We would need to deeply examine each country for its unique qualities and histories, and consult closely our regional allies before deciding upon a policy.

Here are some examples of policy conclusions that might be drawn. We might cease supplying arms to Baghdad, declare our support and strong military aid for an eventual Iraqi Kurdish state once its warring factions unify and improve governance, and support a federation for the rest of Iraq. For Syria, we could seek a more ethnically coherent loose confederation or separate states that might balance each other—the Iranian-dominated Alawites along the coast, the Kurds in the northeast, and the Sunni Arabs in the heartland. We could also demonstrate we are not anti-Shia by improving relations with Azerbaijan, a secular Shia country bordering Iran that seeks a closer relationship with the United States.

An added potential benefit of this approach could be a fomenting of tensions within Iran, which has sizable Kurdish and Azeri populations, thereby weakening the radical regime in Tehran.

Some might argue this approach impractical, destabilizing, and offering Iran new opportunities.

Perhaps, but the region’s current trajectory is more dangerous. The burden is on the United States to adapt its policy to the dissolving of borders and Iran’s aggression. Iran is not a status quo power content to consolidate its winnings; its emboldened radical regime is intent to dominate the region and destroy Israel. An Iranian-Israeli conflict looms ever closer as Iran establishes bases and missile factories in Syria, posing a second front in Israel’s north. And Americans must concentrate on Iran’s continued development of nuclear-capable ballistic missiles that could eventually reach the U.S. homeland.

Further, artificial states have been divided or loosened before with some success, such as the Soviet Union, Yugoslavia and Czechoslovakia, all post-WWI formations. Bosnia and Herzegovina have also managed as a confederation.

The Trump Administration should follow Reagan in taking the offensive to Iran. The current political structure of the Middle East serves Iran’s interests, and it’s time to upend it.

Due to an editing error a slightly different version of this column was published earlier this week.

Michael Makovsky is President and CEO of the Jewish Institute for National Security of America (JINSA), and a former Pentagon official.